This year's incarnation of the Ticinese festival served up a fascinating selection of both auteur and genre works. This critic had a great time.

On the surface, a film festival is ostensibly a place where you watch films on seats of varying comfort. One writes about the films and makes comparisons between them. But a film festival is also about the location in which you watch them, the people that you meet and how you are feeling during that time. Naturally, my own reviews are influenced by my sleep, mood, comfort and hunger levels. There’s been many festivals that I haven’t enjoyed simply because there was nothing interesting surrounding the films that I saw or the vibe was just off. Even my first Locarno, despite the great films, was a little lonesome, as I had fewer surrounding experiences than I had this time.

After all, the second best thing about a film festival apart from the films is talking about the films, whether it’s over a beer, just after a screening or in a garden-party set straight out of the Finzi-Continis. It’s yet another reminder of the magical connections that can be made within a space where everyone is just as enthusiastic about film culture as you are. On the key metric of connections, conversations and cultural experiences, Locarno 2021 was just as good as a film festival can get. 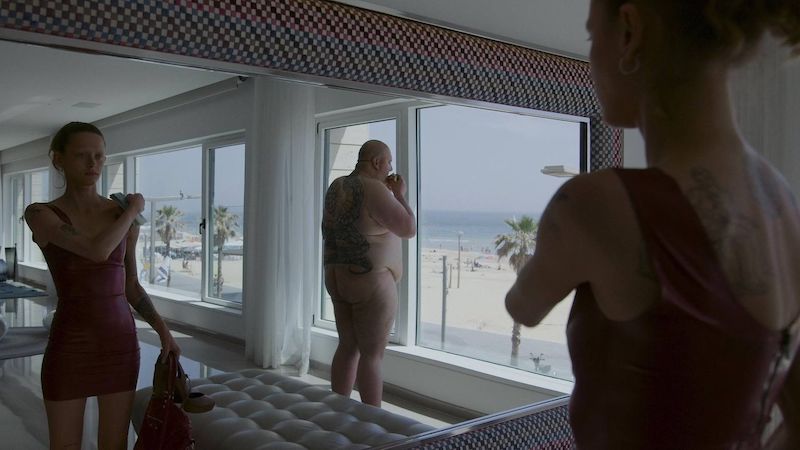 One experience truly stood out: after hearing about industry lunches, I sent an email asking to be invited. I was graciously squeezed in and enjoyed a buffet meal featuring skewered chicken, glorious salads and macaroni pasta, all washed down with a few glasses of Merlot di Bianchi. Once there I heard from a Lugano-based journalist that Peter Greenaway’s unfinished Walking to Paris was being shopped around and looking for bidders (not an official festival entry). This led me to an art gallery perched on top of a small castle designed by none other than Leonardo DiVinci himself. One couldn’t ask for a better preview of Greenaway’s latest art-obsessed piece, telling the story of Constantin Brâncusi’s long journey from Romania to Paris.

The castle was designed to fight off the Milanese. The Swiss won. I asked the gallery assistant showing me around if he was happy to be Swiss instead of Italian. He replied that he was first and foremost Ticinese. It reminded me that the spaces that you live and navigate culture in matter. So do the ways in which you move from place to place. Taking the Alpine express from Zurich to Locarno was a particularly revelatory experience. One second the signs and announcements were in German. After emerging through a tunnel into Ticino, everything changed to Italian. It was like entering into a completely different world. Like Brâncusi, the longer trip made me appreciate the city in a whole new light.

If the countryside and architecture feel timeless, the seemingly steadfast Swiss (slash Ticinese) are always open to trying new things, with Locarno opening itself up to wider audiences by embracing genre. Beckett (Ferdinando Cito Filomarino) and Free Guy (Shawn Levy) — both Hollywood-backed, large budget productions — made the headlines, but there was also a noticeably different genre entry in Cop Secret (pictured above). According to director Hannes Þór Halldorsson and the crew, who I had the privilege of meeting, the film, which aped buddy cop classics such as Tango and Cash (Andrei Konchalovsky, 1989) 48 Hours (Walter Hill, 1982) and Lethal Weapon (Richard Donner, 1989), is a complete fantasy. No street cops in Iceland have guns. They rarely shoot up banks either. It is a purely cinematic kind of action-comedy, foregoing logic for the laughs and thrills instead.

Auteur Abel Ferrara took to genre too with Zeros and Ones (which won the best director award) ,ten times more serious than Cop Secret and about a hundred times more confusing. Ethan Hawke was tasked as the archetypal American hero to investigate a secret that could collapse the Catholic church. Here the New York director took the moral muddiness of Le Carré spy thrillers and turned it into a positive quagmire.

Zeros and Ones may have straddled the difference between genre and despair, but other films outright embraced the latter idea, creating films with deep, wounding voids at their centre. Medea (Alexander Zeldovich, pictured top) transformed the classic Greek myth to the modern Russian expat generation, telling the story of a woman who would do anything to reverse the effects of ageing. I found it to be a haunting epic with extraordinary power, buoyed by an exceptional Tinatin Dalakishvili performance. Likewise, Luzifer (Peter Brunner) took the void literally, with its continuous revisiting of a cave in the side of a mountain, supposedly the place where the devil may reside. But while Medea felt open and had the feeling it could go anywhere, Luzifer, despite an excellent Franz Rogowski performance, sadly had nowhere to go.

Meanwhile, The Sacred Spirit (Chema García Ibarra, pictured below), the blackest of comedies from Spain, and a special mention winner, used deadpan framing to portray the call of cult conspiracies, leading to a truly whacky experience. Judging from fellow reactions, expect this competition film to have the longest legs.

Quality can often be a question of ambition, with many truly ambitious discoveries found in Concorso Cineaste del Presente section, which focuses on first, second and third features. One can sense the effort the programmers went to in order to create a truly diverse programme, spanning from the standout Streams (Mehdi Hmili; pictured at the top), a breathlessly exciting investigation of contemporary and contradictory Tunisian culture, to Wet Sand (Elene Naveriani) — winner of the Best Actor award for Gia Agumava — a quiet plea for more humanity towards Georgia’s LGBT citizens. Other complaints against national culture included the Mexican Mostro (José Pablo Escamilla), an investigation of the underclass which combined experimental tropes with slice-of-life drama to ultimately middling effect.

On a purely formal basis, the most credit and appreciation must go to FIRST TIME [The Time for All but Sunset – VIOLET]. Set on the Hamburg U3 circle train, it shows director Nicolaas Schmidt commit to a simple conceit with truly poignant results. I watched that one on the way to the festival, my own train journey going by and making for a truly three-dimensional experience. It’s another reminder that films never exist in the void, but are innately tied up in the way that they are seen. While trepidatious on my way here, I leave feeling deeply excited about the potential for world cinema to show me new things while finding new ways of telling those stories. It reaffirms the Swiss (slash Ticinese) festival as one of the best in the world.

I can’t wait to go back.

A modern myth for the Russian expat generation, this film excels due to the great command of tone by actress Tinatin Dalakishvili - live from Locarno [Read More...]

This cautionary tale of believing in conspiracy theories is greatly abetted by a strong aesthetic and some eye-catching imagery - live from Locarno [Read More...]

FIRST TIME [The Time for All but Sunset – VIOLET]