"Dirty gem"
The work of the iconic graphic artist is injected with new colours and movement, in an inventive little doc that likely wouldn't please its late subject - in cinemas Friday, August 13th

Narrated by Stephen Fry, and based on hundreds of letters, diaries and notes left by MC Escher, this is a highly engaging and creative documentary. It uses a plethora of devices in order to provide the Dutch artist’s work with a new lease of life: animation, colouring, juxtapositions, original drawings contrasted against the real places portrayed, interviews with his sons and much more. The problem is that the Escher, who died in 1972, would have probably hated the film. Escher explicitly noted: “I’m afraid there is only one person in the world who could make a good film about my work: that’s me”. In fact, he didn’t like it when anyone altered his work. He had a profound antipathy for the hippies and how they incorporated “shrill” tones into his artwork: “the colours scream, just life their music”, he put it succinctly.

Despite the wishes of his subject, Robin Lutz forged ahead with his documentary, and the outcome is both informative and entertaining. Escher: Journey into Infinity is a not a strictly chronological biopic. It’s instead a celebration of his work. The film structure is more or less circular, without an beginning and an ending, much like Escher’s celebrated drawings. 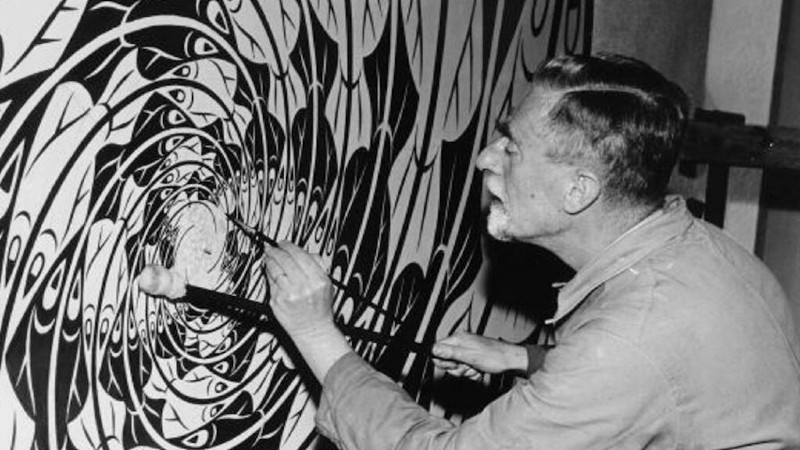 Escher is self-conceited, humorous but also romantic (as in his “rind” self-portrait with his wife, pictured at the top). He boasted about being wealthy and educated. Death was a recurring theme. The artist was convinced he would die the next day. A real-life drama queen, his exaggerated claims undoubtedly aided by Fry’s passionate delivery. His sons Giorgio Arnaldo and Jan share peculiar anecdotes about their highly eccentric father and his lifetime partner Jetta. We learn that Maurits Cornelis (hence the MC) was fascinated by Spanish and Italian towns and citadels, which became one of the most recognisable topics of his drawings, But he quickly left Italy after his oldest son flirted with fascism. He eventually moved to Nazi-occupied Netherlands, where he became extremely prolific, despite his growing discomfort with the persecution of Jews.

Mathematics, however, was his favourite subject. He questioned whether he was a real artist: “I hover somewhere between art and mathematics”. He pursued wonder instead of beauty. He liked to toy with illusion of infinity, with direction (you could never tell whether people were going up or down the stairs in his drawings), and with metamorphosis. He drew a lot of inspiration from the motifs at the Alhambra. He became obsessed with expressing endlessness in a limited space. A bird morphed into a fish and back. A human morphed into a cube and back. A pessimistic black man morphed into an optimistic white man. Ad infinitum. He often listened to Bach while drawing, arguing that the German composer’s highly repetitive arrangements provided him with creative fuel.

All in all, a fitting tribute to a multilayered and unparalleled artist.

Escher: Journey into Infinity is in cinemas on Friday, August 13th.