"Dirty gem"
The latest offerings from NQV all examine the vulnerabilities of boys on the edge of manhood, their naivety, and the darkness of the adult world, which they cannot overcome - out on Friday, August 13th

In the first short film Gotta (Netherlands; Sarah Veltmeyer), young Leon (Jordy Coens) is lonely and spends his time moping around the edge of the port where he lives. He is a wounded child, deeply hurt by the affair his mum is having with a man, not his father. When he finds a used condom in the waste bin in the kitchen, he is enraged and tries to smash up the motor bike of his mother’s lover. He retreats to the edge of the port, where his mother finds him. She is irritated by him but ultimately understands his hurt. But will they achieve some sort of emotional truce?

In The Last Day of School (Lithuania; Gabrielé Urbanaité), Edgaras (Lukas Auksoraitis) is a thoughtful boy with a happy relationship with his girlfriend Migle (Karolia Kildaité). Yet he has been on trouble in the past. His criminal friend Viktoras (Sarunas Zenkevicius) ask Edgaras for one last favour. He asks him to help him pick up drugs. Edgaras and Viktoras pick up the drugs, but the police are already on to them. In a car chase, Edgaras tries to swerve all over the road to throw off the police but eventually shots ring out and Edgaras is seriously wounded. Edgaras’s last piece of risk-taking has not paid off.

In The Tree House (France; Simon Guélat), the themes of inexperience and bravado are examined symbolically. Four kids, two girls and two boys, (Simon Boutin, Devi Couzigou, Marie Millot, Miya Péchillon) illegally enter a military area. They horse around, making knowing remarks about the corruption of the military establishment. They are playing at adult politics. They are heading for a tree house, which shows they have only just entered adolescence. After walking around the area for a while, they return to the tree house to find a sinister looking soldier (Gaëtan Vourc’h), his long gaunt face indicating something more alarming than just soldierly toughness. The kids are transported out of the forbidden zone. 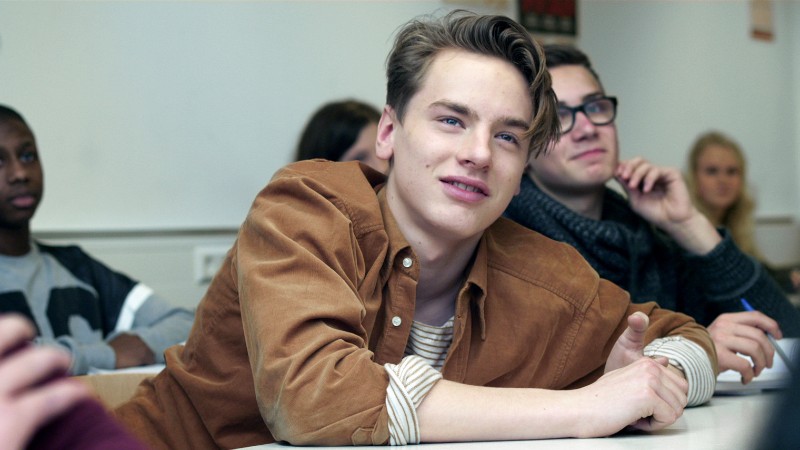 One of the boys, however, Denis (Simon Boutin) goes back to find the sinister soldier standing guard at the entrance of the zone but, surprisingly, lets him in. Denis goes to the tree house and the other boy Mathieu (Devi Couzigou) turns up. Denis and Mathieu have had sex together but when Denis makes an advance, he is turned down. For Mathieu this is kids’ stuff, and it is all over now. Mathieu clears off. Denis settles down for the night. Denis is woken up by animal sounds. He gets up and discovers a large, horned goat in the woods (a symbol of the devil), which he follows. Further on, he discovers the sinister soldier, who does not stop him, but instead, with the boy looks into a beautiful, very clear lake. Denis dives into the lake. But were all of these events real? War is not a political concept for kids to mock. It lies at the heart of the darkness that possesses all of humanity.

In Gameboy (Netherlands; Giancarlo Sánchez) four young men (Thijs Boermans, Tobias Kersloot, Sjeng Kessels, Tarik Moree) think they are wise guys. They wish to break into the local school and seize forthcoming exam papers and sell them. All goes well and they make a lot of money. However, their actions have been caught on the CCTV camera and Thijs is told by his headteacher that he is expelled from school. He ends up stealing his mother’s car and goes off with his mates on another jaunt, speeding down the motorway. But fate has a significant twist for him in store.

Pollux (France; Michaël Dichter) is the name of a local factory that is about to be closed. The working-class community is up in arms trying to prevent the closure. Vivian (Vivian Oudin) has other resources. He is hiding the local drug dealer’s hashish in his mum’s garage, but it has gone, and he is terrified that he will suffer retribution at the hands of the local dealer Guimauve (Grégory Gatignol). The scenario is much the same as we know in the United Kingdom as “county lines”, young kids used to do the carrying work for vicious dealers. The film recounts the boys’ desperate attempts to raise enough money in time to satisfy Guimauve. This film is marked by the wonderful performance of all the young actors (Vivian Oudin, Maximilien Decorse, Tom-Eliott Fosse-Tourel and Mathieu Lourdel). Maximilien Decorse is particularly striking with his elfin features yet an ability to convey a whole range of emotions from vulnerable innocence, knowing hardness and despair. I hope we shall see a lot more of him in French cinema.

Boys Feels: I Love Trouble is out on Vimeo and Amazon Prime on Friday, August 13th.

NQV Media presents five short films from Sweden, Switzerland, the Netherlands, Croatia and Kosovo well worth looking into for their sensitive portrayal of masculine problems round achievement, protection and love - on VoD on Monday, February 8th [Read More...]