"Greasy movie"
The real story behind the stripper journey-turned-saga thanks to a series of tweets gone viral becomes a movie equally disturbing and entertaining - on Sky Cinema and Now on Wednesday, July 3rd; also available on other platforms

The protagonist, A’Ziah-Monae “Zola” King, greets us by asking the rhetorical question, “Y’all wanna hear a story about why me and this bitch here fell out? It’s kind of long but full of suspense.” The story she will tell us goes beyond a falling out between two people, and it’s one that we can’t take our eyes away from the screen.

Some will be unfamiliar with Zola’s 2015 tweets about her uproarious road trip to Florida that went viral. Others will have read or will know about the messages that David Kushner wrote about in his article for Rolling Stone, “Zola Tells All: The Real Story Behind the Greatest Stripper Saga Ever Tweeted.” Depending on which side of the fence you land on, you’ll either be prepared for, or ambushed by a real life story that’s as disturbing as it is entertaining.

Set across 48 hours, Hooter’s waitress Zola (Taylour Paige), befriends one of her customers, Stefani (Riley Keough). The pair hit it off and Stefani asks her new friend to join her for a weekend of dancing and partying in Florida. Accompanied by her boyfriend and a nameless man, the plan is to strip in the clubs and make a stack of cash. The allure of the trip wears off when Zola realises she needs to side-eye her new friend, and learns the nameless man is Stefani’s pimp, and hers.

With a strong personality and an abundance of confidence, Zola does not strike us as a victim. If her body is a financial commodity, then she’s in control of how she herself uses it in that way. Finding herself miles from home, she’s trapped in what is a manipulative act of sex trafficking. It’s a foreboding story of how easily a person can be manipulated, especially in the early stages of a friendship, trusting someone to find out if you can trust them. 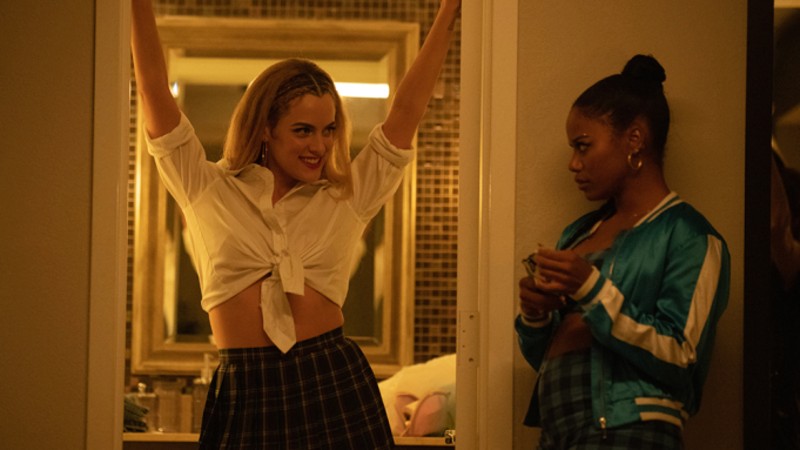 The story is presented as an entertaining yarn, and with its effervescent style, its playfulness with incorporating social media iconography, and what seem to be larger than life characters, we can be forgiven for forgetting this all happened. Zola asks us if we want to hear a story – well, this is a story that could have gone differently, and for others has likely led to experiencing prostitution, or finding themselves trapped in that world. It speaks directly to the social issues of grooming and sexual exploitation that we’re confronting in our contemporary society.

Keogh continues to impress, strengthening the supposition that she’s one of the most interesting actresses of her generation. What’s so striking is her transformational presence in front of the camera, those recognisable eyes and facial features clouded by the spirit of a new character. Stefani compliments the character of Christine Reade of the first television series of The Girlfriend Experience, in which she played a law student working on the side as an high end escort. Christine’s quiet demeanour, her maturity and intelligence contrasts with the exuberant and adolescent like young Stefani. What’s intriguing is how the two characters take us into the world of sex work, and offer two very different glimpses.

By highlighting Keogh, I do not intend to dismiss the performances of either Paige or Colman Domingo, the nameless pimp, whose name is eventually revealed. Stefani’s boyfriend comes across as a clown serves his purpose in the plot, but at best he’s a character we tolerate – irritating yet not unlikeable. Domingo’s performance is captivating, frequently menacing, yet merged with humour, he plays it over the top with exaggerated and dramatic gestures that leave us conflicted – captivated and yet repulsed by him.

There’s an obnoxious and abrasive quality to Zola. Its derogatory rhetoric, the female body as a financial commodity, women pimped out by men is the antithesis of the idealistic ideas we have for the future of our society. There’s a drive to change, to detach from our patriarchal heritage and the subjugation of women to the male gaze and its wants. Or is it? We’re driven by our sexual yearnings, the body is a financial commodity, and even socially accepted relationships have a transactional dimension. What Zola’s story shows is the world is far more complicated than the image we like to paint, where skin colour and gender do not conform so tidily to stereotypical ideas. As disturbing as it is entertaining, Zola offers us a real-life heroine, a survivor, and empowers social media by showcasing its potential for expression and storytelling. It challenges the criticisms of why women are exploited in stories, and why violence and exploitation are depicted so readily – they’re the dark underbelly of our everyday world.

Zola is in cinemas on Friday, August 6th. On Sky Cinema and NOW on Wednesday, July 3rd. Also available on other platforms.