"Mostly clean movie"
This poor rehash of the eponymous 2016 movie is one of the most misguided superhero films of the past 10 years, dogged by cliches and resentment - on VoD on Monday, August 30th

In the opening credits, between gunshots and carnage, we are greeted with the image of a weasel drowning beneath the South American ocean. The weasel forms a part of the rebooted Suicide Squad, a band of cohorts spearheaded by Amanda Waller (Viola Davis), a government agent who exchanges short prison sentences for servitude. The convicts are told that the mission is highly dangerous, but will be of service to the United States. Strangely, the programme does not see it fit to explore what crimes the prisoners were incarcerated for, but rather throws the criminals into a series of dizzying, even nauseating, set pieces.

Basically the story evolves around a nefarious gang of convicts thrown into a mission that could ruin their reputation and even cost them their lives. One of the most misguided superhero effort since Iron Man 3 (Shane Black) was released eight years ago, The Suicide Squad is so profoundly displeasing it could only have been written by a hireling eager to resolve an external conflict driven by greed. Considering the furore that met Twitter in the days after his dismissal from Guardians of The Galaxy 3, the writer-turned-director James Gunn could be forgiven for siphoning some of the resentment into the work he was sculpting. But this acidity quickly turns into idiocy, as Gunn personalises the childishness as a boisterous commander, who equates patriotism to fellatio. Kudos to Gunn for avoiding the “Woke brigade”, but his desire for provocation only furthers the distance between misguided and misjudged. 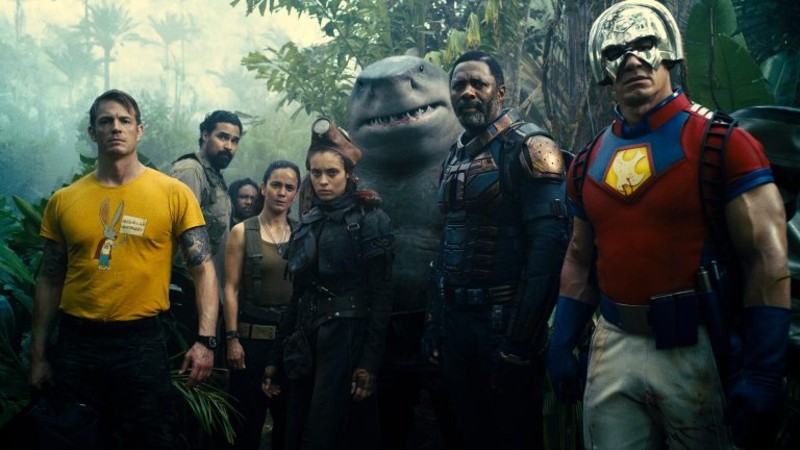 Peacemaker (John Cena) signifies the “typical, hardworking American” that harnesses the very worst of self-flagellation, while Bloodsport (a sanguine Idris Elba) poses as the archetypal London thug. Even the bolshie Harley Quinn (Margot Robbie) is written as a cliché, and she’s given little to bring to the film barring intonation and innuendo. If there wasn’t Peter Capaldi chewing the scenery as a barmy scientist, this would be written off as an unoriginal addition to the growing DC canon.

David Ayer’s strangely misunderstood Suicide Squad (2016) offered a more rounded portrait of a clan desperately clawing back for some recognition in a world that would gladly kill them. Compared to the yearning of Ayer’s script, Gunn’s holds no resolute semblance of character or atmosphere, but gamely resorts to shocking audiences through a variety of unseemly means. And where is the love story that cemented the 2016 opus so beautifully?

Some of the “style” of the graphic novels remains: there’s a turbo charged battle to redemption; an extraterrestrial (this time shaped as a starfish) escapes to cause havoc around the South American jungles; and naturally, it’s a woman who is subjected to the most gratuitous depiction of torture. Gunn’s script is indeed hopeless. Where Ayer understood that it was the dynamism between the convicts that made for a gripping story, Gunn’s focus is on the heads that explode around this supposed tribe of terror. He may have the acumen, but Gunn ultimately fails the characters, the darkness and the wackiness left to him by Warner Brothers and Ayer.

The Suicide Squad is in cinemas on Friday, July 30th. On all major VoD platforms on Monday, August 30th.