"Dirty gem"
Delightful and quirky French movie about mother on a quest to find her son topped the Césars earlier this year and has abundant references to Terry Gilliam - in cinemas on Friday, July 23rd; also available on Curzon Home Cinema

Albert Dupontel’s seventh film is the first one to get a theatrical release in the UK.. His previous feature (arguably his best), See You Up There (2017) recently received a digital release. Dupontel is very big in France, and viewers will probably recognise him as an actor. For example, he’s the guy who smashes the man’s head in Irreversible (Gaspar Noé, 2002). Bye Bye Morons was a major hit last year. It was released before the first lockdown, re-released when they started opening up cinemas, and then was re-released yet again following a second lockdown, and is still doing well in cinemas across the Channel. It clinched seven Césars (the French equivalent to the Academy Awards), including Best Film.

Dupontel made his first feature in 1996. He has followed that success up every few years. All his films have an anti-authoritarian, surreal sense of humour, informed by Terry Gilliam and the Monty Python movies. This one is no exception. The story cycles around Suze (Virginie Efira), a woman who is chronically ill. She is a hairdresser, and trying to find the child she abandoned at 15. She meets J.B. (Dupontel), a suicidal computer programmer who is working in an office reminiscent of Brazil (Gilliam, 1985). 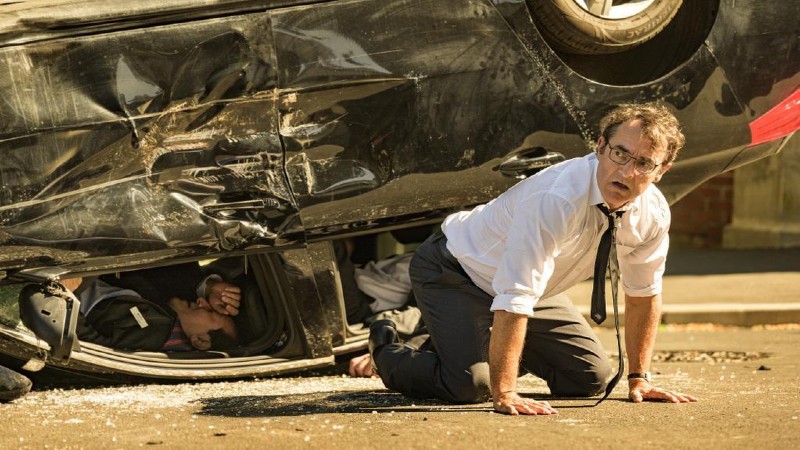 As Suze and J.B. go on a whirlwind madcap journey across Paris to find her long-lost son, it becomes a poignant film with abundant action in the background. At one point they team up with a blind archivist. There’s also a creepy romance and a little stalking. This quirky drama is a fairly accessible introduction to Dupontel’s work. It also has an absolutely glorious ending.

Put simply, Bye Bye Morons is one of the best movies of the year. Dupontel is excellent, but his role as a middle-aged burnout is subdued in comparison to his performance in 9 Month Stretch (Dupontel, 2013), where he turns in a more zany personage. It’s a very imaginative movie, with an otherworldly feel to it. One of the few problems is that some of the CGI is not very convincing.

Bye Bye Morons deals with some heavy topics such as suicide, gentrification and the surveillance state, and has an absolute contempt for police. Many of the character names signal an homage to Brazil. Gilliam himself even pops up with a very amusing cameo as someone who is featured in an advert. Unlike Brazil, Dupontel’s movie takes place in a very weird and imaginary metropolitan France, albeit not explicitly a science fiction film.

It’s nice to see one of Dupontel’s films getting a theatrical release. He’s one the contemporary French directors who has not had his chance to be exported in the way that others such as Francois Ozon and Jacques Audiard have.