"Greasy movie"
The gig economy looks twisted and threatening, in this charming and effective American sci-fi - on VoD on Monday, July 5th

Noah Hutton’s shrewdly crafted alternate reality closely resembles our own. It marks his feature-film debut (his previous movies were documentaries), and earned the American director a nomination for Best First Screenplay at the Independent Spirit Awards.

Set in a parallel present where quantum computing has become a necessity, the film follows Ray (Dean Imperial) – an average Joe too laid-back to accept the changes in the world. Often stuck with parking tickets just because he doesn’t have one of those essential quantum computers, Ray has been having second thoughts about buying into the upgrade. He has a blue-collar job at the airport where he deals with lost luggage. However, the emergence of a mysterious new chronic fatigue that has plagued his younger half-brother needs instant attention.

Ray succumbs to trying out the cabling gig that has been the talk of the town in order to help his ailing brother, who now requires expensive care. This supposedly high-paying, instant-money venture requires intensive physical effort on the part of the ‘cabler’. Unable to figure out a way to treat his brother better, Ray takes up the task of physically laying down the cable in high-terrains within the woods. The idea of the company is to expand its quantum future to unreachable places.

Lapsis constructs an atmosphere of universal fear, unexpected responses, creepy music and deep conspiracy. The dialogue, characters and situations are inventive and packed with occasional humour. Ray is a newbie and we have a great deal of faith in him as his actions are a result of brotherly love. The layer community is hostile, competitive and there are a lot of them in the landscape, yet the manual nature of their job has a weird anthropomorphism which gives the film a mysterious nature early on. 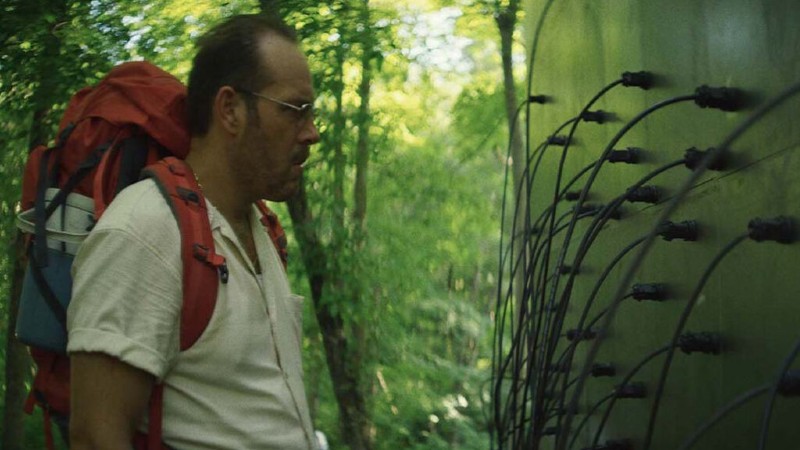 The universe of Lapsis feels coherent and credible when compared to the real world of warehouses, though there’s a definite shift in tone in the last half an hour or so. It does become a bit too slow towards the end. Ray’s story and motivations, though, remain solid, believable and relatable throughout.

The cinematography is auspicious. The images are clear and pleasant to watch, including the constant cutaways to a myriad of wires in the skies. Night scenes are also easy on the eye and there is a well-created momentum that is neither fancy nor shaky. The drone shots from over the treetops are impressive.

What we see in the film may be exaggerated for comic effect but it gets you thinking about the real world. Ultimately, Lapsis is a riff on the gig economy, the shrinking of unionisation, and the growing power of corporations over individuals. Hutton drew on his own experiences having worked himself as an independent contractor for the past decade and having to buy his own equipment and pay for his own health insurance.

Lapsis is out on various VoD platforms on Monday, July 5th.