WITCH: We Intend to Cause Havoc

"Dirty gem"
Fancy a taste of African rock? This documentary looks at one of the very best bands from Zambia - in selected cinemas and VoD on Friday, July 2nd

In 2012, Italian journalist Gio Arlotta heard We Intend To Cause Havoc (WITCH), the vibrant Zamrock outfit, for the first time. Hooked by their infectious energy, Arlotta travelled overseas to meet Jagari, a powerhouse vocalist who’d adopted his stage name from The Rolling Stone records that inspired him to take up the microphone and sing. By then, Jagari had abandoned music for gemstone mining, but the spark that had fuelled him for so long rested behind his eyes when he agreed to the documentary. And with a revival in popularity, Jagari agreed to reboot WITCH, this time with Arlotta as his captain, manager and friend.

The film doubles as both a celebration and continuation of the music from the 1970s, and the footage – cabalistic, colourful and crisp as it often is- plunges us headfirst into an environment entirely different to the pedestrian territories favoured by most rockumentaries. Much like it did across the European plains, rock proved an escapist outlet for musicians in Zambia and other African countries. In one of the film’s more moving montages, viewers get to see the fluorescent clothes worn throughout the country, as their response to the turn of the decade. The 1970s, a fertile period across the globe, was also the decade that fashioned the performance art as a political soapbox, and Jagari- now older looking-recalls the purpose, poise and identity it offered him. 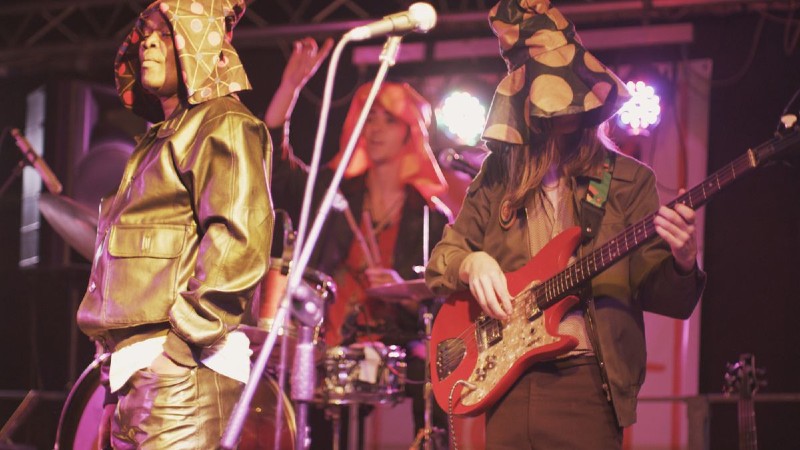 “It’s so nice to make music without thinking of it,” one band member tells us, caught in the emotion and vitality of the music itself. He wears a proud face in public, but behind the visage comes the voice of a worker who nearly cost his family their entire savings. He watched as the original WITCH crumbled under the wave of disco artists punching their way to the top of the 1980s, and the labour that had sustained him in the mines, was growing harder to countenance the older he got. And yet the performances – exhilarating as they are – demonstrate a frontman, caught in the imagination of his art. His voice leads audiences to clap, his hips encourage women to dance, and then there’s the enthusiasm that feeds into his younger bandmates, each keenly aware of their importance in this great catalogue of work.

Fittingly, the singer finds himself in a place of great peace as the film comes to that inevitable close. “God doesn’t mock,” he says; “He’s got something better for me.” He smiles, the film ends, and then we walk out to the beat of a rollicking number. It doesn’t get any better than this!

WITCH: We Intend to Cause Havoc is in selected cinemas and VoD from Friday, July 2nd.

A journalist and a theatre director join forces in order to rebuild a Sierra Leone's fractured identity and neglected culture - in cinemas on Friday, June 25th [Read More...]

People have the power! Doc reveals that a grassroots revolution transformed Burkina Faso in a real democracy, and how the surrounding art world helped to articulate the resistance - from the Native Spirit Film Festival taking place between October 10th and 21st [Read More...]

One of the oldest singers in the world, and a woman who liberated African music and women rights through her own silent personal revolution - is subject to the eye of a very European documentary-maker [Read More...]