"Filthy genius movie"
Robert Altman’s 1975 masterpiece is given a 4K re-release in all its subversive, satirical glory, as sharp and defiant now as when it first opened during the USA’s Bicentennial. But Nashville is no celebration; it charts the hypocrisy and tragedy not only of the music business, but America at large - in cinemas from Friday, June 25th

Set over five days in the country music capital, the film follows an array of musicians, journalists and political operators at the height of the genre’s commercial success. Populist presidential candidate Hal Philip Walker (whom we never see) arrives in town to hitch his wagon to the stardom of country singer Haven Hamilton (Henry Gibson), who welcomes the opportunity to enter the political sphere.

Watching Nashville in the wake of Donald Trump’s presidency only intensifies its uncanny frequencies, and not just because country singers were just about the only people willing to play at his inauguration. When trust in politicians is at its most abysmal, stars rush to fill the void, and Nashville’s post-Watergate politics echo like a gunshot into the present day. Along with the commercialisation of politics, Altman skewers the pageantry that papers over constitutional crises; public displays of onanism in the middle of a battlefield. 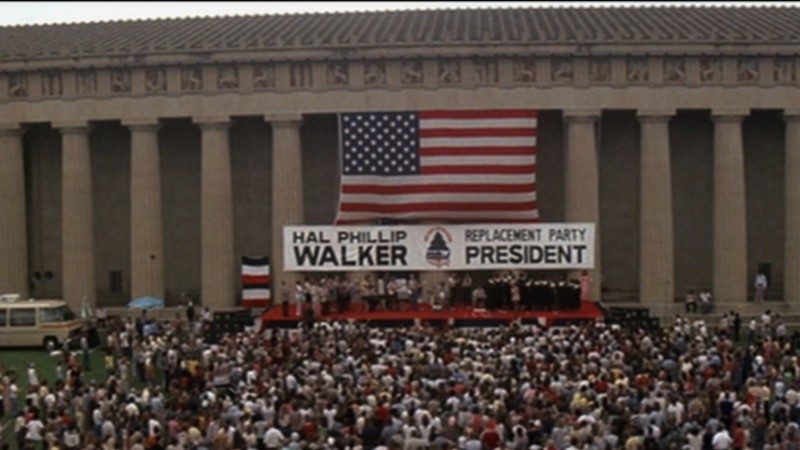 That the director achieves all this while juggling 25 characters and almost as many storylines (including what can only be described as a love hexagon) is breathtaking. He is point-blank uninterested in the success stories that populate most music movies, concerned instead with reality; a sprawling tapestry of lies, commerce and people talking over each other. His invention of multi-track recording captures America as it is rather than as it appears on screen, restlessly flitting between 100 simultaneous, semi-improvised conversations.

The performances are masterful both on- and off-stage, with stand-out turns from Geraldine (daughter of Charlie) Chaplin, Lily Tomlin and Jeff Goldblum in a bizarre non-speaking part. The most upsetting (and Trumpian) story is Sueleen’s (Gwen Welles), an aspiring yet misguided singer made to strip at Walker’s campaign fundraiser after Haven just sang a song about family values. In using the earnest conservatism and patriotism of country music, Altman achieves a devastating combination of hilarity and humanity.

The result is as prescient as Network (Sidney Lumet, 1976) and a clear inspiration on the ironic ending of Monty Python’s Life of Brian (Terry Jones, 1979) and industry exposé that is Boogie Nights (Paul Thomas Anderson, 1997), though the latter makes concessions to Hollywood that Altman would literally punch you in the face for suggesting. Despite its successors, Nashville is so unparalleled in its artistic scope, technical ambition and musical prowess that the only thing that has even come close to Altman’s vision is reality itself.

Nashville is in selected cinemas on Friday, June 25th.