"Filthy genius movie"
In this beautiful documentary, Victor Kossakovsky offers us an insight into the workings of the everyday animal: a pig and her piglets - film exec produced by Joaquin Phoenix is on VoD on Monday, July 5th

One of the joys which documentaries provide too seldomly is the opportunity to see animals live out their lives with great dignity and humanity. Gunda excels at that particular task: The piglets and their mother, on whom the film is almost entirely dedicated to, are captured with tremendous detail, as attentive to the hay that sits as their home, to the sweet nothings that makes them connect as a family. I’ve never seen any film that details a pig barn with such tremendous affection, but Gunda also works on a technical level, and it’s all the better for it.

The film presents the family in crisp, clear monochrome, a dreamlike palette for the pigs to inhabit. It would be unfair to describe the film as black and white, or pixelated, as much of the imagery is ripe with timbre and texture. Opening on the central sow, the camera emerges to position the animal in the throes of good fortune. Behind her lies a passing sunlight; beneath her come the demanding mouths of hungry children. And yet for all that is growing, there is a stillness to the world, and the mother holds a vacancy that suggests an unease behind those stilted, starry eyes. 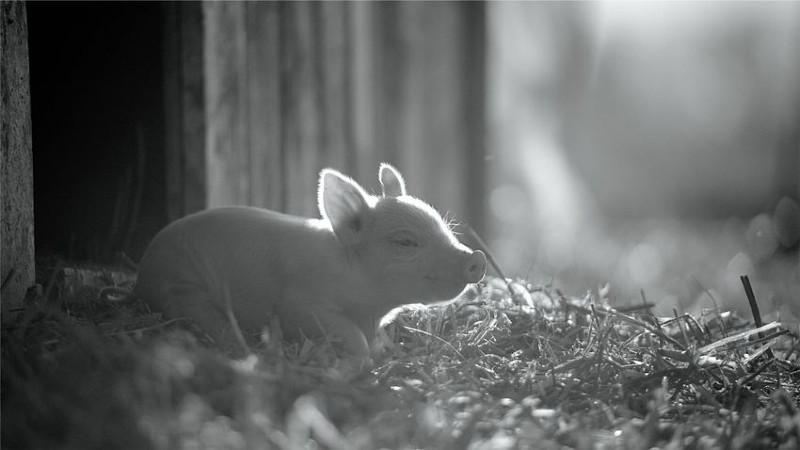 It’s like a painting, positing the pigs in a world where grass and gestures are the forefront to a work that presides in building up a world that’s tangible in its delivery. The camera enables viewers to peer into a world beyond the grasp of human touch. Then there’s the grunting, presented with hubristic care, demonstrating a language beyond the reaches of human translation. But in this world of fields, friendship and family, the noises hold contemplative, even transcendent properties, and the aesthete is all the more detailed for the added effect.

The action is mostly contained in one setting, but director Victor Kossakovsky brings enough variety to make sure that the runtime never seems laborious. Instead, we hang over the piglets, watching them feast as their mother watches them flourish. They rise and feed to the beat of the sun, as a beguiling, brooding rooster opens the kingdom up to the morning’s riches.

Forty minutes into the film, and we’re embraced with one of the most profoundly lyrical shots of the year. Leading her young through the forest, the sow takes a moment to reflect on their surroundings.There, the camera offers a long shot, of a family cast in the shadow of a forest rich with greenery. For it’s at that moment that the world, vast as it is, shows us our animals at their most magnetic, most magnificent, and most assuredly human.

Gunda is in cinemas on Friday, June 4th. On VoD on Monday, July 5th.

A South African man who suffers a mid-life crisis rediscovering himself through his relationship with an octopus in a bay near Cape Town in South Africa - now on Netflix [Read More...]