"Filthy genius movie"
The American comedian films himself during the Covid-19 pandemic, and the outcome is strangely profound, more David Lynch than Ricky Gervais - available now on Netflix

Comedy specials are not often discussed in cinematic terms simply because they don’t usually comply with what is described as cinema. Sure, they appear on a screen, but specials tend to consist of a comedian telling a series of thematic jokes and amusing anecdotes in front of a live audience. An obvious pointer is to take a look at the stand-up specials that fill Netflix’s content: Ricky Gervais: Humanity, Aziz Ansari: Buried Alive, Jim Jefferies: Intolerant, Kevin Hart: Zero F**ks Given, Jerry Seinfeld: 23 Hours To Kill, and Hannah Gadsby: Nanette to name only a few. All these specials take place in the usual setting of a live stand-up performance captured so folks not lucky enough to attend at the time can enjoy it at home. Maybe there will be a couple of pre-filmed skits and sketches to break up the act, maybe the comedian will wear a nicer jacket than usual. A comedy special is rarely shown on the big screen, although it’s not unheard of. The performance of Fleabag at the National Theatre in London which featured a solo Phoebe Waller-Bridge was beamed into cinemas in 2020. Granted that was considered more of a narrative one-woman monologue, but its humour and format also gave it the feel of a stand-up comedy show.

Mostly a comedy special is designated to an album or CD release, a television show, or more recently straight to a streaming service. The cinema is rarely its home. In this sense, comedian, musician, actor, film director, and writer Bo Burnham’s latest special, titled Bo Burnham: Inside, which just landed on Netflix is not dissimilar. Its emotional scope that places it high above the usual function of telling jokes to an audience for laughs. No audience exists in Inside because no audience was allowed to attend any performance of anything for most of the past year. Like all of us, Burnham was thrown into lockdown and isolation in early 2020 and the novelty of this new way of life soon wore pretty thin.

In his room, and with a vast assortment of multicolored lights and projectors to help visualise the journey and an array of musical instruments, Burnham takes on the role of performer, camera operator, sound engineer, writer and editor of the whole special. It’s a literal one man show. No production crew is present; no other actor is there to bat lines back and forth. It’s pure Bo Burnham. This might sound indulgent. It is a little. But Burnham is a skilled storyteller and the restrictions of the lo-fi production actually give it the wings to fly.

Be it song or screen, Burnham knows where the story lies. This is most evident in his directorial debut Eighth Grade (2018) which perfectly captured the life of a teenage girl in transition from middle to high school, but it also plays out perfectly well here.

We see Burnham begin Inside not far from where we saw him in his 2020 turn in Promising Young Woman (Emerald Fennell, 2021), handsome, tall, a little nerdy and awkward, a glimmer of charm and mischief to his smile. By the end, he’s dancing in his underwear, skinny as a rake, beard patchy and unkempt, and hair down to his shoulder. The once hopeful and charming smile is replaced by an expression of fear, boredom, and hopelessness. Burnham could at this point easily morph into Martin Sheen’s Captain Benjamin Willard in the opening scenes of Apocalypse Now (Francis Ford Coppola, 1979). It’s a cinematic journey in the sense of a man losing the plot and turning his own personal hell into sad art. 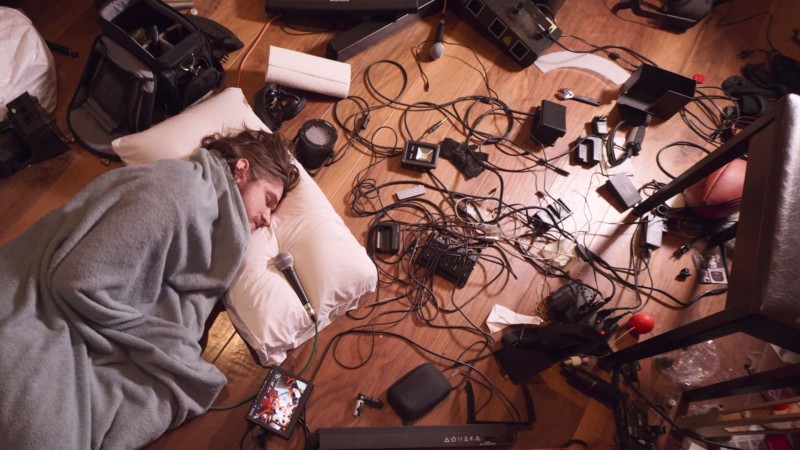 That really is the only narrative that is present in Inside. As it plays out, Burnham performs his trademark shtick of singing catchy as hell songs that broach political commentary (“How the World Works”), awkwardness (“Facetime With My Mom Tonight”), mental health (“Feel Like Shit”), internet culture (“White Woman’s Instagram”), aging (“Turning 30”), dating during a pandemic (“Sexting”) and the world going to hell (“Comedy”). We could consider all this the soundtrack to the Burnham cinematic experience, and his lyrical observations are something to be admired. He causes the listener to jump from a chuckle to a sob in just a single verse. For example, the lyric “20,000 years of this; seven more to go” from the song “Funny Feeling”, a song that details the end of civilisation, choked me up wit its realisation that humanity is in the end game if we don’t smart up and drop overconsumption in the next decade or so.

His gift as a songwriter and performer in stirring up those ancient human yearnings that only music can do are apparent in his compositions. Why he hasn’t hit the big-time as an astute singer/songwriter baffles me. Actually, scrap that. The last thing this burning world needs is another Ed Sheeran. Keep it comedic forever, or until we’re all dead.

His sock puppet performance of the song “How the World Works” dishes out more class consciousness than Marx can muster in all three volumes of his Das Kapital. Okay, that’s an exaggeration, but the song certainly can summarise well the past year of social upheavals, discontent and injustice that the pandemic has brought to light for many that perhaps weren’t affected before. The song contains the best radical political satire since Stereolab’s 1994 song “Ping Pong”. Welcome to the resistance, Comrade Bo!

When he’s not singing for his supper, there are moments in between in which Burnham will try to tell a joke, or a funny anecdote. Mostly these fall apart by either not fulfilling their potential – it’s hard to find the punchline when nobody is laughing – or by breaking down in tears. The saddest part of the film is when a large digital clock turns to 00:00 and suddenly it’s Burnham’s 30th birthday. A realisation kicks in for Burnham and for the audience of the moments we have lost during this pandemic: the birthdays, the weddings, the potential relationships and friendships lost or never had. These small moments etched around Burnham’s party-style anthems are where Inside finds its true heart.

Of course, one could argue that there is a certain white male privilege at play here. The fact being that Burnham was allowed and fully funded by Netflix to write, film, and perform a comedy special while in lockdown. Most of us had, and maybe even still have, no such luxury of humor. Thankfully he peppers his songs with a knowing nod to the absurdity of his situation and his white maleness, and in doing so eases the viewer into knowing none of what he is experiencing is fake in any way.

For a comedy, there are not many laugh out loud moments to be found. That’s not a criticism. Inside keeps the viewer teetering on the edge of existential joy and despair from start to finish. My own viewing experience had to be taken over a two evening period due to the fixed grin cramping up my facial muscles. My cheeks are still twitchy.

Inside might not be cinema in the big C sense of the word. Yet it is cinematic in its scope. But what even is cinema these days anyway? When Martin Scorsese releases his latest films direct to Netflix and Zack Snyder forgoes a cinematic release of his spectacular four-hour Justice League movie and places directly to streaming services, can we still expect film to be different from what Netflix and Amazon class as “content”? The internet made Bo Burnham the performer he is today and it’s fitting that he returns to it for what might be considered his second directorial effort. Every skit is suited to the cell phone or laptop screen, every song is consumable on its own, every frame could be memed to hell. It is perfect internet-based cinema for an age of attention deficit and self-obsession. As Burnham sings in the song “Hands Up (Eyes on Me)” the audience must have “All eyes on me, all eyes on me”. Don’t we all want that?

To my mind – and granted my mind is warped towards thinking this – Inside has more in common with the eerie cinema of David Lynch than the extravaganza of a Ricky Gervais or Jerry Seinfeld stand-up special. It’s like a Lynchian fever dream that Burnham just so happened to witness and thought appropriate to reproduce. It’s his Lost Highway (Lynch, 1997).

And to end, I hope that reproduction isn’t on any other comedic performers mind. This type of comedy could only have been done by Burnham. He surfs the existential crisis in a way that allows the viewer to be sympathetic, and considering he spends the entire special alone in a single room, reaches out to many of us who have also felt alone, vulnerable, and despairing at our current state of the world and makes it feel okay. We are not alone. We never were. We were just inside.

Bo Burnham: Inside is available to watch on Netflix.

Doctor Jekyll and Miss Online: what happens when your online and real-life persona disconnect from each other? Splendid teen drama is out in cinemas Friday, April 26th [Read More...]