"Greasy movie"
Claustrophobic Irish horror about hapless man tempted by the lure of easy money gets under the skin of viewers, while also echoing the rabbit hole trope - on VoD on Thursday, June 3rd

Many like myself would have been introduced to malice disguised as kindness by the witch offering Snow White the poisoned apple. It’s unlikely I registered the moment’s significance when I was a child, the simple childish view of a monochrome world, void of moral contradictions was penetrated and made murkier.

For Isaac (Jonathan French), the protagonist in Damian Mc Carthy’s Irish horror film Caveat, a sinister proposal by his landlord risks leading him down a precarious rabbit hole he may never escape. His instincts tell him to be cautious, but the lure of money, coupled with his ego, assures him he can handle the situation.

Caveat is another cautious tale of being wary of propositions that seem too good to be true, and just as Snow White was seduced by the lush red apple, so to is Isaac tempted by the lure of easy money. He agrees to look after his landlord’s niece Olga (Leila Sykes), for a few days. His original suspicions that this was too good to be true are confirmed, when he learns she lives in an isolated house on a remote island, in Cork, Ireland. The only access is by boat, and Isaac can’t swim. Once in the house, he’s then instructed that he must wear a leather harness and chain that restricts his movements to certain rooms.

The stage is set for a story in which a man walks around a strange house. It’s hardly enticing, but Mc Carthy spices it up with a violent game of cat and mouse between Isaac and Olga. Meanwhile, untangling the truth and the lies of what happened to her parents, as well as uncle Barret’s (Ben Caplan) unclear motivations, linger like a fog.

Caveat is an effective and unassuming piece of filmmaking. It’s unlikely to have you racing up to the rooftops to shout about, but it gets under your skin, and it has an aura of cinema of a bygone era. The cuts feel rough and noticeable in moments, echoing the cinema of the 1960s and 1970s. Unlike the polished look and feel of big budget horror, Caveat’s edit in moments recalls The Wicker Man (Robin Hardy, 1973), that through the rough aesthetic honoured the anxious and nightmarish ordeals of its character’s reality. 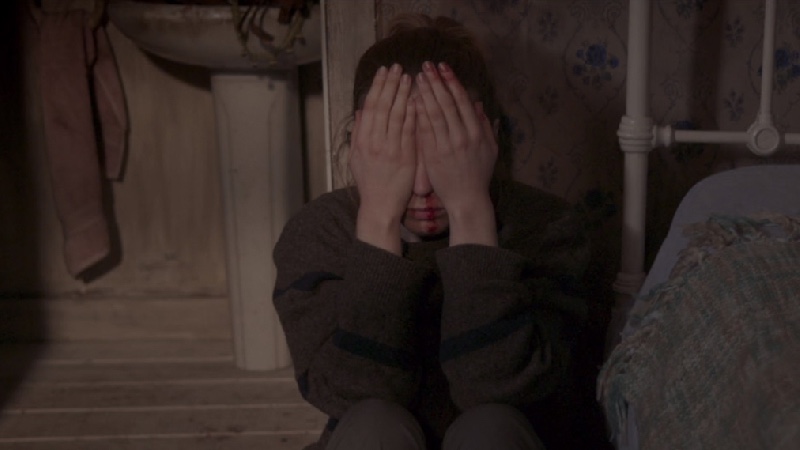 Sitting down to watch a horror film, we enter into a stare-down. The filmmaker dares us to not look away, to listen, unsettling us through sight and sound, but also through narrative should that be a tool at their disposal. Early on Mc Carthy who not only wrote and directed, but edited the film, along with his re-recording mixer, Richard De Mowbray, and sound mixer, Hugo Parvery, deliberately emphasise the diegetic sounds. Richard G. Mitchell’s score is used sparingly, and it heightens our hyper-arousal to sound, triggering our fight or flight instincts of fear. Immersing us in the drama, we are lured down the rabbit hole. We find ourselves disoriented, heightened by an effective use of the image and narrative ambiguity.

Caveat never descends into cheap attempts to frighten us, nor does it refrain from appreciating the value of a well placed jump scare. Transitioning from shock to morbid curiosity, we linger on the horror, familiarising ourselves with the sight, and scrutinising why we should be scared. In the moments following Isaac’s arrival, the suspense gradually builds, and in one playful scene featuring a portrait painting, the director toys with the idea of whether it’s the house or the painting that’s haunted. Later in the film, he follows up a jump scare with the lingering gaze of the camera, before cutting back and forth, creating suspense through our anticipation of what we’re about to see, or what we could see happen.

Mc Carthy is wise enough to understand that it’s a film that will succeed for its atmospheric eeriness, and the complicated relationships between the characters. We must be kept on the cusp, never quite allowed to reach an orgasmic high. He achieves this in part through making Caveat not about the why, but about what happens.

Similar to a dream or a nightmare, the events that unfold seem to make sense, but the motivations of Barret, and what happened in the past remains shrouded in ambiguity. We should also remember that Isaac’s naïve choices that lead him down the rabbit hole, have that eerie feel of peril and despair we find in the dreamscape. We could be forgiven for thinking that Isaac will wake up from a dream, but if he does, it’s after the closing image.

The distrust and paranoia, the tangled up narrative of the past, the ulterior motives, are an echo of our times. Our political system and its figures have erected façades, and Brexit has sown the seeds of division and distrust, anger and frustration. Caveat echoes the rabbit hole of our decrepit reality.

Caveat is streaming exclusively on Shudder from June 3rd.

A man in London embarks on a reckless journey of self-discovery with manic, inexplicable fervour - low-budget, low-stakes thriller/drama is now also available on Netflix [Read More...]