For those put off by the overblown histrionics of The Woman in the Window (2021), Framed offers a far more effective low-key and lower budget alternative riff on a classic Rear Window (1954) premise. Telling the story of a young amateur photographer who becomes obsessed with snapping the woman across the street, it is a film of actual substance, unlike Joe Wright’s excessive A-list nonsense.

Thomas Law stars as the entitled Karl who begins the film quitting his job to become a full-time amateur photographer. One assumes he has amassed a significant savings fund to live in a studio apartment in London without a job, where opposite in a nondescript apartment building is a woman with no qualms about strutting around the house in her underwear with her clothes off.

Like the protagonist of the Krzysztof Kieslowski’s masterpiece A Short Film About Love (1988), his voyeurism doesn’t appear to be sexually motivated — rather he sees his project in terms of its artistic potential, wanting to create an exhibition entitled “The Stalker & The Exhibitionist.” When the woman sends notes asking for more pictures, they build a strange relationship built on watching and being watched.

Working with a limited budget and a constrained amount of sets, Framed isn’t particularly interested in going down the lurid thriller route, rather using its premise as a means to explore the nature of consent, the relationship between the sexes and the relationship between life and art. Lottie Amor plays Karl’s friend and confidant Virginia, who is appalled by the photos, acting as the film’s feminist conscience. Rarely given much interiority of her own, Amor (in a debut role) shows an impressive naturalism in certain scenes but does tend to overplay her hand in others. 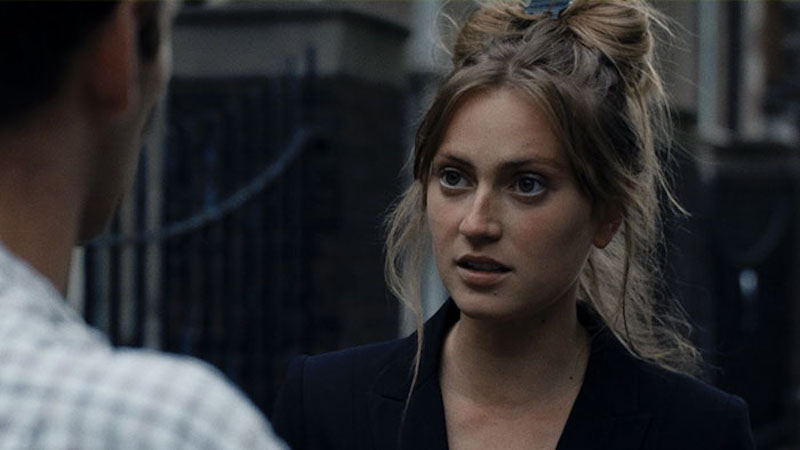 Conversely, Law does a great job of conveying male pride and privilege that leaks beneath a “nice guy” persona. He knows what he is doing is wrong, but believes that as he hasn’t got any bad intentions, then it doesn’t matter. His convoluted views of gender and relationships — including seeing nothing wrong with a man insisting on paying the entire bill — seem to stem from this same wellspring of male chauvinism, all the more sinister considering how nice he seems from his exterior. This persona seems to remain intact throughout the film, a brave decision considering how easy Framed could have fallen into false moralism by the end. Instead, we are invited to watch alongside Thomas and come to our own conclusions.

A late-in-the-game twist — featuring blackmail, a private detective and a political scandal — does little to dispel the academic nature of the film, which remains firmly fixed in second gear throughout its short runtime. Nonetheless, given its micro-budget and modest aims, Framed is a confident debut from Nick Rizzini that provides far more to chew on than the empty $40 million The Woman in the Window. Not quite Hitchcock, and not quite Kieslowski either, it charts its own dogged path through sexual politics and the compromised nature of much male-created art.

Framed is now available to stream on Prime Video.

An eye for a lie: this Indian thriller has elements of Hitchcock and Dostoyevsky, but the moralistic tone prevails over the subversive aspects of the movie - from the London Indian Film Festival [Read More...]