"Greasy movie"
Humour hooks us in a subversive and non-sanitised slice of nostalgia, as the fate of the universe is decided in small-town America - out on Thursday, May 20th

We’re not short on stories about good versus evil, in the midst of which the fate of Earth and the wider universe hangs in the balance. Steven Kostanski adds to this echo chamber with an independent American sci-fi, horror, comedy, that’s a little subversive and non-sanitised.

Siblings Mimi (Nita-Josee Hanna) and Luke (Owen Myre) unwittingly resurrect an ancient alien overlord, who was entombed on Earth millions of years ago. Nicknaming him Psycho Goreman, PG for short, they discover they can control this tyrannical force, that once threatened to destroy the universe, with a magical amulet. Forced to abide by Mimi’s childish whims, PG’s presence is detected by allies and foes from across the galaxy, and in this corner of small town America, the fate of the universe will be decided.

Kostanski threads the film with a through-line of humour, and the storytelling burns with the energy of its authors own passion. If it missteps here and there, which it does in at least one drawn out comedy montage, the humorous interaction between the youngster with attitude, versus the Archduke of Nightmares, sees its charm endure throughout. 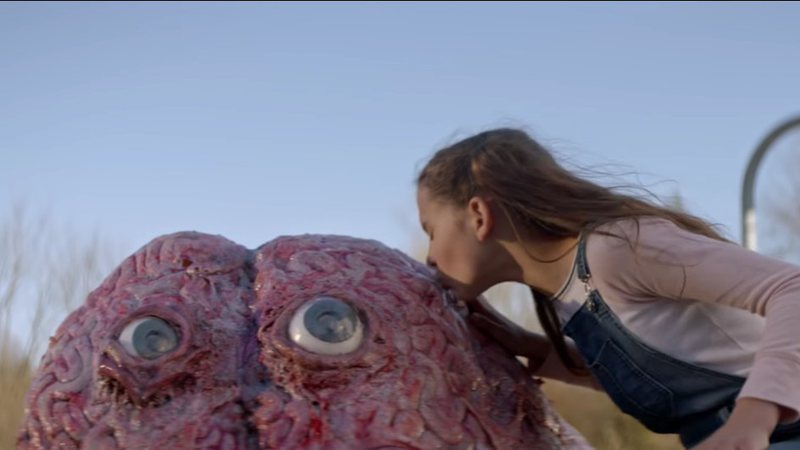 We never come to feel bored or disinterested with the overly familiar story. The razor-sharp wit hooks our interest and keeps us immersed, even if Kostanski becomes enthusiastically over zealous. The spirit of the film lies in Mimi and PG’s interaction, layering beneath the larger tale of a conflict of good versus evil, a pleasant yet cantankerous intimacy.

A throwback to previous decades, particularly the ’80s with its practical effects and story of kids living out an adventure, it’s not an archetypal and romanticised view of adolescence. Mimi is a different beast entirely, her childish whims, her arrogance and sense of self-importance turned up a few notches. It contrasts with Spielberg’s family friendly ET (1983) – the thought of Elliott apologising for not having brought E.T any pornography to amuse himself is a strange one, and sits outside of the realm of possibility. Kostanski delights in an irreverent and darker humour that also panders to our antisocial and anti-authoritarian feeling. Often in life we’d like to speak our minds more freely, but we’re forced to bite our tongues. Mimi and PG speaking openly is an act of wish fulfilment, a moment for us to fantasise about verbally letting rip.

Leaning towards irreverent adult humour, Psycho Goreman is able to retain an innocence to the storytelling. It has the feel of the imagined, it’s not a perfectly sculpted narrative, although it was likely never Kostanski’s intention. Instead, he wanted to give us a childlike fantasy.

For those of us that have kept our inner child alive or seek nostalgic reminders of what genre cinema once was, Psycho Goreman will delight. For others its charm may be enough to win them over to see this as a curious film with heart, that does not betray itself with cheap sentimentality, but lets such feelings emerge naturally.

Psycho Goreman is streaming exclusively on Shudder from May 20th.