"Dirty gem"
Argentinean drama about an unruly dog, a meteor and a fishbowl helmet blends surrealism with deadpan to impressive results - on all major VoD platforms on Monday, July 26th

After desperate complaints from his neighbours about the noise of his dog, Seba (the filmmaker’s brother Daniel Katz) is told he can’t bring the animal into the office either. The Argentine drama then finds Seba at different intervals throughout his life, eventually encountering a meteor that poisons the air above four feet off the ground. These snippets of working from home and infected planetary atmosphere may sound familiar, but the telling is anything but.

Director Ana Katz walks a tightrope between the natural and absurd, starting with the titular dog who in reality does appear quiet as a mouse. The surrealism is treated in perfect deadpan, even when people have to start walking in a squatting position so as to not breathe the air above four foot. Katz’s (the director’s brother) face never suggests anything is untoward for the 73-minute duration, as though we’ve collectively forgotten what normality looks like.

Like Kurt Vonnegut’s Billy Pilgrim, Seba becomes unstuck in time as the movie jumps forward to show snapshots of his life, some barely lasting longer than a minute. In one moment he awkwardly catches the eye of a fellow wedding guest, the next they are expecting a baby, and moments later fitting the child with a fishbowl helmet that allows him to breathe as if floating in space. The effect is like watching Boyhood (Richard Linklater, 2014) on fast-forward on a submarine. 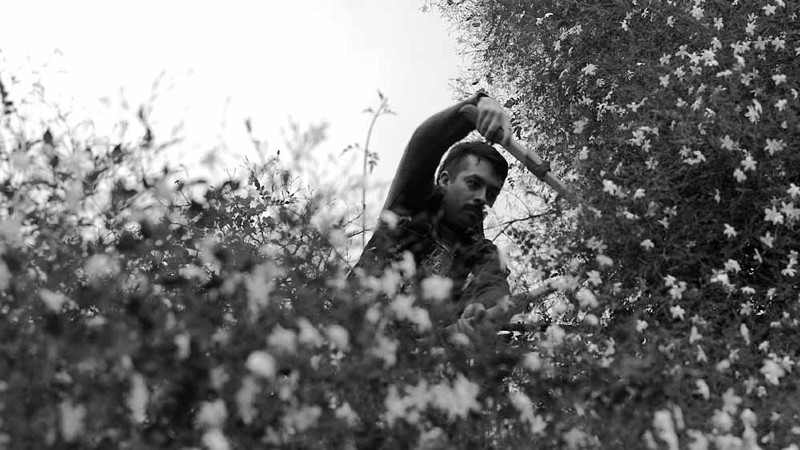 The difference (apart from the obvious weirdness) is that Katz avoids Richard Linklater’s philosophising, never feeling the need to draw attention to moments of quiet profundity, which are left suspended in the poisoned air. The filmmaker augments beautiful black and white photography with hand-drawn frames and unusual closeups, including a shot of a sandwich on a train seat that lasts nearly a minute.

Tempting as it would be to underscore its themes of rushing through life or failing to connect with one another, the film is too transient and enigmatic to condescend or pin down, eschewing the linear notions of time and ageing that plague our stories of work, life and family. Yet for all its lyrical absurdism and sci-fi detours, The Dog Who Wouldn’t Be Quiet could hardly feel more human, even lifelike. Maybe that’s a true sign of the times.

The Dog Who Wouldn’t Be Quiet is on exclusively on Curzon Home Cinema on Friday, May 21st. On other platforms on Monday, July 26th.