Truman Capote and Tennessee Williams had a lot in common: they were more unapologetic homosexuals in a society not used to such behaviour. They both changed their birth names (Streckfus Persons and Thomas Lanier wouldn’t look particularly good on the silver screen). They were both highly successful writers (Tennessee was a playwright), who saw their works consistently turned into Hollywood movies. These films were more successful than the original pieces, earning both writers a comfortable life. They both were addicted to various drugs. And they both died at a similar age and similar time (Tennessee passed away in 1983 aged 72, while Truman died the following year shortly before his 60th birthday).

The most remarkable similarity, however, is in the subversiveness of their work. Both men wrote pieces that challenged the orthodoxies of the time: marriage, fidelity, consumerism and sexuality. They incorporated overt bitchiness into writing. They wholeheartedly embraced depravity and immorality (or what was perceived as such at the time). And these pieces made it to the mainstream, even if Hollywood often watered down the dirtiest elements. Tennessee Williams recommended that viewers walked out of the cinema theatre five minutes before the end of film, presumably in order to avoid the saccharine-doused endings. Adaptations discussed in this documentary include Tennessee Williams’s Baby Doll (Elia Kazan, 1956) and The Night of the Iguana (John Huston, 1964), and Truman Capote’s Breakfast at Tiffany’s (Blake Edwards, 1961) and In Cold Blood (Richard Brooks, 1967).

Naturally, their art was an extension of their hedonist-turned-tragic existences. Both men confess to being highly promiscuous at young age, and struggling with various drugs (the movie names alcohol and barbiturates, but there were many more) and depression as they grew older. They “goaded each other in the agonising task to turn life into art”, Tennesse explains. 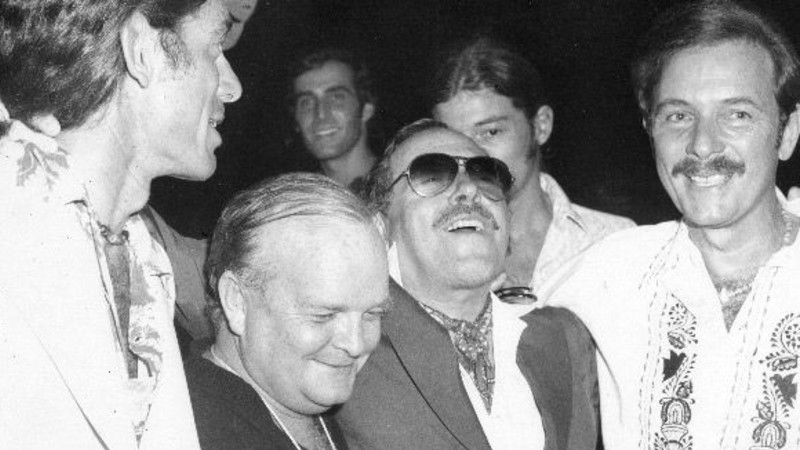 It’s only at the end of the movie that we find out that these two men did indeed share a warm-hearted affection and mutual respect for each other and for each other’s work. They were good friends, yet they never had sex. Some sort of intellectual bromance. They are both quizzed during a talk show about the nature of love and sex, and they both seem to think that the two didn’t necessarily belong together. Such sexual candidness was very unusual at time, and I imagine that such interviews raised a few eyebrows at the time.

This 86-minute documentary is engaging and informative enough to convert new fans. The extensive television interviews are blended with a vast voice-over of sharp and witty remarks made by the two writers (voiced here by two narrators). This is interspersed with footage from the various Hollywood films named above and more. Interesting trivia include the fact that Truman Capote wanted to cast Marilyn Monroe to play the lead in Breakfast at Tiffany’s, and that he was never consulted about the director’s choice Audrey Hepburn.

Truman & Tennessee is on the VoD platforms on Friday, April 30th.

Documentary sheds on the life of the flamboyant and openly gay American writer, with a focus on his unfinished novel Answered Prayers - on VoD on Friday, January 29th [Read More...]

The real-life beauty and the bitch! Graduate student has to contend with the ultra sadistic horror writer Shirley Jackson, as she moves in with the her husband into the author's mansion - American drama starring Elizabeth Moss is in cinemas Friday, October 30th [Read More...]