What if the director is a murderer?

Indie American filmmaker Gillian Wallace Horvat talks about her feature debut: I BLAME SOCIETY, a dirty horror story in which she plays herself committing murder, and questions the ideology of filmmaking - in an exclusive interview

Filmmaker, critic and film programmer Gillian Wallace Horvat steps in front of the camera to play a twisted version of herself in the American feminist horror-comedy, I Blame Society. When someone tells her that she “would make a good murderer”, she’s unperturbed by this randomly strange compliment. The proverbial lightning in a bottle, she decides to not dismiss the idea, and instead sets off to make a documentary about committing a murder.

Her previous films include the shorts Gunplay (2007), Kiss Kiss Fingerbang (2015), and Whiskey Fist (2017), and she produced the documentary A Fuller Life (Fuller, 2013), about the legendary maverick director Samuel Fuller. She also produces documentary shorts for Arrow Films and Kino Lorber, and has contributed to Sight & Sound, and is a guest columnist for Filmmaker Magazine.

In conversation with DMovies, Horvat discussed confronting the issues of indirect discourse in cinema, and the “personal and psychological discomfort” of starring in I Blame Society.

Paul Risker –
Why film as a means of creative expression? Was there an inspirational or defining moment for you personally?

Gillian Wallace Horvat – I originally came from theatre and then I started to hate it [laughs]. Theatre has a tyranny around the actor and you’re completely beholden to them. You can rehearse and give notes, but ultimately it’s them on stage in front of a live audience, and they’re going to do whatever they want to do.

With my control issues that just wasn’t going to work, and so I latched onto film as a medium where not only is there more control for the writer and director than in theatre, but there’s also a complex grammar in filmmaking to express ideas. I thought that would be a worthwhile and lifelong goal to understand that grammar, and to develop a style within it.

PR – How does the dialogue you enter into with film criticism influence your filmmaking, and vice versa?

GWH – They’re both self-informing and it’s the best of both worlds. When I write criticism or I do some form of scholarship, I can bring my own personal experience and understanding to bear to know where a filmmaker’s head was at. Of course, you never know what was going on in someone else’s head, but it gives me a certain place to project from. When I’m doing my filmmaking, I must be influenced by the multitudes of perspectives that you know can be applied to a film, and certain academic perspectives as well, and that can be inspiring.

When we were making I Blame Society, I was thinking about the ideology of the apparatus when it comes to the role the camera itself plays, not only as the object that is capturing the film, but as an object that you see within the film.

PR – The character talks to us, aware that she’s on camera and that she’s making a film. It opens up the discussion of the literary versus the cinematic, specifically how the camera hinders our access to the mind of the character. The camera is its own entity with its own point of view, and as much as the frame tries to adopt the points of view of one or more character’s, we must begin by accepting that the camera is a contradictory entity within film.

GWH – That’s actually something [Pier Paolo] Pasolini wrote about in an essay, where he talked about the indirect discourse of literature and how that is harder to achieve in film. I think he used some examples from 19th century novels – you look at indirect discourse and you look at narration that’s in the third person, but then somewhere in this third person narration you realise there’s a point of view, an interiority of a specific character. Film often has that perspective of a third person narration, but it’s just the camera is plunked down, pointed at somebody, so how do you find that subjectivity and understand whose journey you’re on? Who are we supposed to be feeling for, and what am I supposed to be feeling? And am I supposed to be questioning what I’m feeling?

You’re right, I Blame Society in some ways attempts to subvert that problem of cinema, of a certain kind of distanciation from the audience by making it more intimate, and presenting it as the document of the filmmaker. It’s a direct communication with direct address. 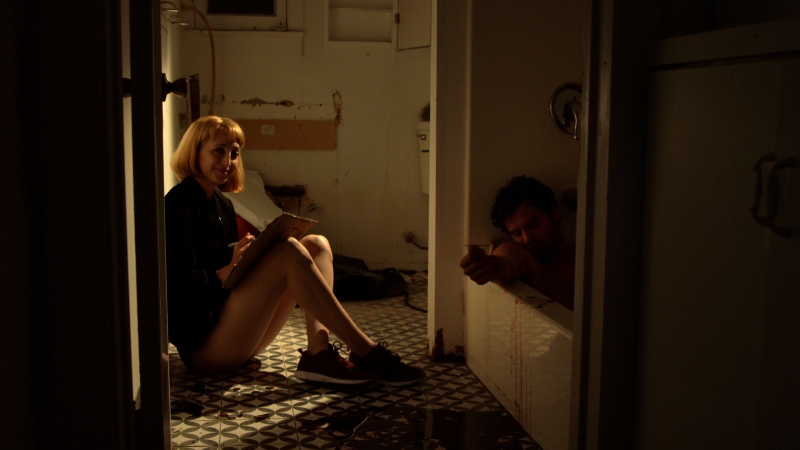 PR – Here you invite the audience to become active participants, but would you agree that ambiguity and subversion can be a means of creating a space for the audience to enter the film?

GWH – I definitely have certain intentions in mind, and they’ve been my intentions with everything I’ve made. I want the audience to laugh, I want them to be scared, and I want them to be kind of turned on at different places in all of my films. I’m looking for an overlap there, and as they’re feeling those three things in alternation and then also in combination, I want them to appreciate and also resent me for doing that, and then afterwards appreciate that they resented it. So I want everyone to feel complicated about everything that I do.

PR – What I Blame Society hinges on is us hitting that moral quandary, realising we shouldn’t have entered this dance with the devil.

GWH – Yeah, and there’s a pleasure in that, in subverting expectation. It’s fun, and there are a lot of great films like American Psycho (Harron, 2000) that trade on the charisma of a character, to get you to root for them even as they do something abhorrent. Those films are dangerous, but they’re also really fun.

PR – I felt that there was an air of improvisation to I Blame Society, and recalling Pablo Larraín telling me that a film is found in the final cut, would you describe your approach to filmmaking as an act of trusting your instincts, as a journey of discovery?

GWH – That’s the impression we wanted to give, but actually it was created more meticulously. There’s certain scenes that are improvised and we add to those to give the rest of the film a bit of a spontaneous feeling, because that’s really exciting too in a horror movie, that feeling of what’s going to happen?

I had a very specific idea with the script and I had a very specific idea in the cut. There wasn’t too much experimentation, and I appreciate filmmakers who do have a much more impressionistic way of making a film, or they’re like, “I grabbed some stuff here and I grabbed some stuff there, and oh, then I had this other idea for how we should do the scene…”, and then they find the film like they made a documentary. They just look at the footage and they find the film, but I can’t do that because like I said, I have control issues. I need to know what’s going to happen and how to execute it, and then I know I at least did it how I intended, and hopefully well.

There has to be so much more faith in yourself and in the medium if you’re going to go about it the other way – it’s inviting chance and collaboration. Pablo Larraín is probably less neurotic than I am, and I love his movies. Whatever he’s doing, he’s doing it right, but I couldn’t do it that way. If he were to ever teach a film class, I’d probably take it so I could figure out how to do it that way.

PR – Filmmaker Christoph Behl remarked to me: “You are evolving, and after the film, you are not the same person as you were before.” Do you perceive there to be transformative aspect to the filmmaking process, where you change as a person?

GWH – We’re all the sum of our experiences, but for me what you said reminded me of the personal and psychological discomfort I felt finishing the film, because of the transformation that the character went through, and also my physical transformation. I had to cut my hair onscreen, pluck my fucking eyebrows off, and bleach my hair. It was so unnerving, dissociating and alienating. At the end of the film I had to look in the mirror and see another person – this character that was still holding on. I didn’t feel the movie was over until all of my hair grew out and there was no blonde left in it anymore.

Yeah, that felt really good and once that happened, I felt like I was the other person on the other side, but I felt like I lingered so much in this liminal, half-psychotic place for a while. It was frightening to look in the mirror and not see yourself anymore.

I Blame Society is out on Digital on Monday, April 19th.

Feminist horror comedy made on a shoestring budget is is a savage stake into the heart of faux-woke Hollywood - on Digital on Monday, April 19th [Read More...]

A jazz musician and his lover find their love affair hitting the rocks on the Cornish coast, in a captivating British drama with withs in the French New Wave and Italian Neorealism - available to stream and download [Read More...]

Melancholy study of a Korean immigrant family in the Reagan-era US is leavened by winsome performances and cinema’s cheekiest child - available on VoD (and finally also on Sky Cinema and NOW) [Read More...]