"Dirty gem"
James Luxford sheds a new light on the dirty comedy classic from the late 1990s, just in time for the release of its special edition on April 19th

When you think of Austin Powers, chances are you think of characters or jokes from the sequels, 1999’s The Spy Who Shagged Me or 2002’s Goldmember (all directed by Jay Roach). The latter two films in the trilogy were far more popular, each grossing around five times the original films’ box office. They have also ensured the series’ downfall, with characters such as Fat Bastard and Verne Troyer’s Mini Me having not aged well over two decades.

However, we’re here to talk about Austin Powers: International Man of Mystery. The 1997 first movie that satirised spy movies from the 1960s, nearly a quarter of a century on, has aged surprisingly well. Creator Mike Myers stars as Austin Powers, a charismatic British secret agent who enjoys two things – free love and saving the world. In 1967, his nemesis Dr. Evil (also Myers) freezes himself while evading capture by Powers. The secret agent also has himself frozen, waking up in ‘progressive’ 1997 when Evil re-emerges in Nevada. As the mastermind hatches a plan to hold the world hostage, Powers must overcome his old-fashioned attitudes if he’s to save society from destruction.

Just as the story looks back on the flower generation with affection, viewing this film invites a kind of nostalgia. A modestly budgeted spoof that clearly has no idea of the cash cow it’s about to become, Myers reinvents himself as a multi-character comedian in the vein of Peter Sellers. As Austin, he darts around the screen being silly and giggling at his own childish gags (“allow myself to introduce…myself”). He then plays Evil with a cartoonish deadpan, a would-be Bond villain trying desperately to hide his own ineptitude (the “One MILLION Dollars” and “sharks with lasers” scenes are still hilarious). 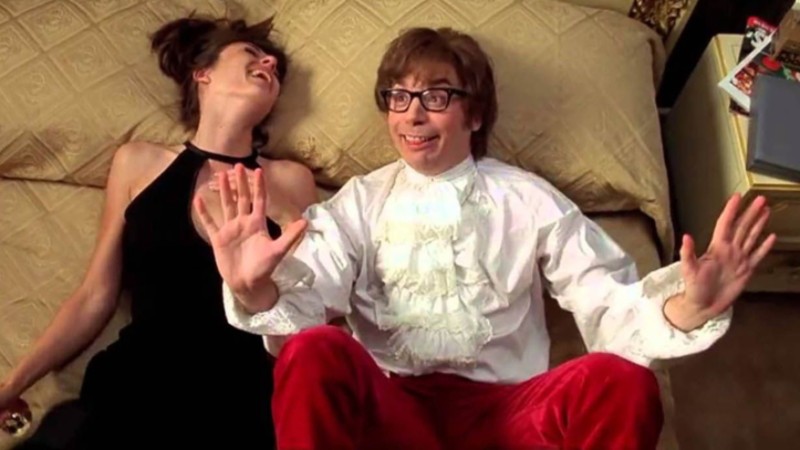 Taking good natured jabs at everything from Bond to The Persuaders via Our Man Flint, there are clever observations such as Dr. Evil’s son Scott (Seth Green) pointing out the flaws in his father’s plan. There’s also a repeated bit where we are asked to think about what happens to the families of henchmen, which is still sharply observed today in the era of Marvel superheroes amassing huge body counts.

However, this dirty classic from the 1990s is most effective when being harmlessly silly. The ludicrous asides like Dr. Evil recalling his childhood while in therapy, or introducing Frau Farbissina as “the founder of the militant wing of The Salvation Army”, is the kind of clever nonsense Myers does best. Michael York’s impossibly chipper M equivalent, Basil Exposition, is a joke within a joke that might sneak under the radar at first glance.

He’s joined by Elizabeth Hurley, who was quickly dispatched in the second film but becomes both straight woman and conscience to Powers as fellow agent Vanessa Kensington. A clear pastiche of Emma Peel, she never tries to compete with Myers for laughs, but becomes essential in giving him an arc as she tries to teach him that the recklessness and misogyny of the 1960s have no place in this new era.

What’s interesting is, whereas many 1990s’ comedies might draw a horrified wince from future generations, the film is relatively unproblematic. At least, for a film featuring penis pumps and literal toilet humour. Most of the jokes are at Myers’ expense, because he’s normally the only one on screen. Indeed, the very nature of the story is to move on from old thinking. At one point, the relentlessly randy Powers declines the advances of Vanessa, as she’s too drunk. It’s not flawless, but in its own daft way does its best to show the ridiculousness of the mindset he’s defrosted with.

The special edition of Austin Powers: International Man of Mystery is out on DVD, Blu-ray and Digital on Monday, April 19th.