"Filthy genius movie"
Feminist horror comedy made on a shoestring budget is is a savage stake into the heart of faux-woke Hollywood - on Digital on Monday, April 19th

This isn’t the only feminist movie out this week. British black comedy Promising Young Woman (Emerald Fennell) is being released to a lot more fanfare, yet this low-budget American movie is a lot dirtier. It’s the first feature directed by Gillian Wallace Horvat, who also co-wrote the script and stars in the film. Horvat’s day job is directing short documentaries, mainly for the Olive Films Signature Line.

Horvat uses the actors’ real names and have them play fictionalised versions of themselves. Horvat plays a filmmaker whose latest script has been rejected. When she is complimented by someone how says she “would make a good murderer,” she decides to make a documentary about her becoming a murderer. because auteurs are psychopaths. She is also taking meetings with absolutely film executives who want something with a “strong female lead” and spurt out buzzwords such as “intersectionality” without having a clue what they mean. It’s all portrayed a mumblecore–meets–Man Bites Dog fashion, and expertly uses iPhone, security cam and GoPro footage.

Gillian Wallace Horvat’s performance is absolutely fearless, and has a wonderfully awkward energy to it. Her character is refreshingly narcissistic, weird and obsessive, doing things for herself, and being something that is dreaded in Hollywood: “unlikable“. The fact that she plays a version of herself gives the film a layer of authenticity that would be impossible with a professional actor. 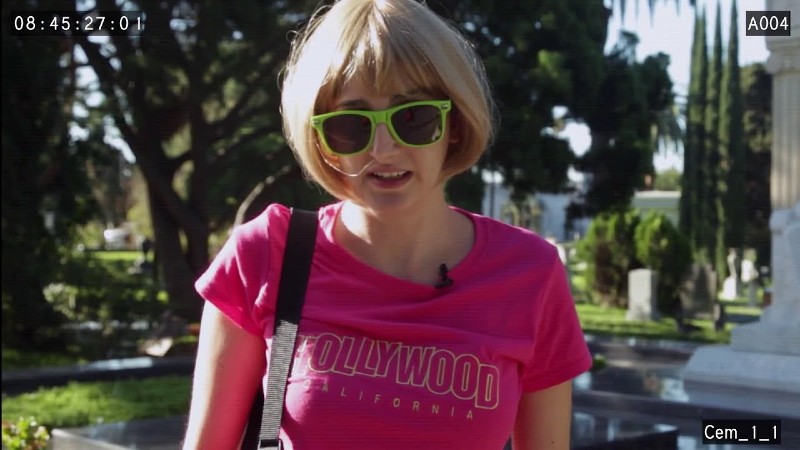 The murders that eventually take place are more therapeutic than any of the ones on offer in Hollyweird. Chase Williamson – who genre fans will recognise as Dave from John Dies at the End (Don Coscarelli, 2013) – is Gillian’s creative partner in the film. Horvat hilariously nicknames his girlfriend (Alexia Rasmussen) “Stalin,“ and she is is the main focus for Horvat’s homicidal anger. Williamson also co-wrote the script.

Two of Horvat’s shorts have producer credits for Daniel Waters, the screenwriter of Heathers (Michael Lehmann, 1979) whose acidic black humour has had an undeniable influence on I Blame Society. There is one scene where a character starts killing people and making it look like suicide, which is a clear reference to the dirty classic.

I Blame Society is one of the most refreshingly deranged films in recent memory. It’s also hilarious: her loser boyfriend character has an “Elevated Sci-Fi David Lynch Graphic Novel” that he is always saying he is going to finish. This startling debut feature is equally angry with the male gatekeepers as it is with the woman filmmakers who put up with their own oppression. The ending scene is absolutely killer and sums up everything wrong with Hollywood’s obsession with a “strong female lead” instead of just letting female filmmakers and screenwriters write complex female leads. It’s a film that any creatives, not just exclusively female filmmakers, who feel mistreated by society, can relate to. For some it may too uncomfortable, but art isn’t always a warm, cosy blanket.

I Blame Society is out on Digital on Monday, April 19th.

The cult classic that helped to catapult a very young Winona Ryder and Christian Slater to fame is now 30 years old, but is its black humour still effective so many decades later? [Read More...]