"Greasy movie"
A jazz musician and his lover find their love affair hitting the rocks on the Cornish coast, in a captivating British drama with withs in the French New Wave and Italian Neorealism - available to stream and download

Cinema and the love story are no strangers to one another – old acquaintances by now, many lovers have stared long and hard into one another’s eyes, shared a first kiss, first dance, and had a lust filled or romantic tryst. This has led to either a happily ever after, or many a broken heart.

In director Justin John Doherty and writer Neil Fox’s British drama Wilderness, it’s the turn of touring jazz musician John (James Barnes) and Alice (Katharine Davenport). When they meet after a gig, their one night-stand develops into a full-blown love affair. The pair take a romantic getaway to Cornwall, and after spending an evening with John’s former touring mate Charlie (Sebastian Badarau) and his wife Frances (Bean Downes), their bliss is rocked when their vulnerabilities and flaws are exposed.

It’s necessary to acknowledge that Wilderness comes out of the same creative stable that produced Mark Jenkin’s Bait (2019). Associations are like double-edged blades, and as much as we may try, we cannot help but consider the two films together. Completed two years before the release of Bait, that rare near-perfect masterpiece we crave, always searching for the next one, Wilderness is not that film. With that said, it’s a captivating work that along with Bait, echoes those moments in cinema of stylistic explosions as seen with Italian Neorealism and the French New Wave.

Wilderness like Bait has that same visual out of film vibe, a jarring feeling that goes beyond what Jean-Luc Godard did in À bout de souffle (Breathless, 1960), and differing from the extremes of British social realism. It’s a short sharp gasp of what cinema can be, escaping the neat and tidy aesthetic that we so often see, to offer something more expressive.

Scripted and shot with a deliberate intent, it’s unlikely Wilderness is as improvised as it is liable to feel. To liken it to music, which is fitting given the jazz musician and the soundtrack. it’s not as extreme as “free blowing”, where the musician improvises without restraint. The rhythm of the dialogue and performances looks, feels and sounds different, but it’s the strong expressive voice that mid-flow can mistakenly feel like the filmmakers are improvising with the filmic language. 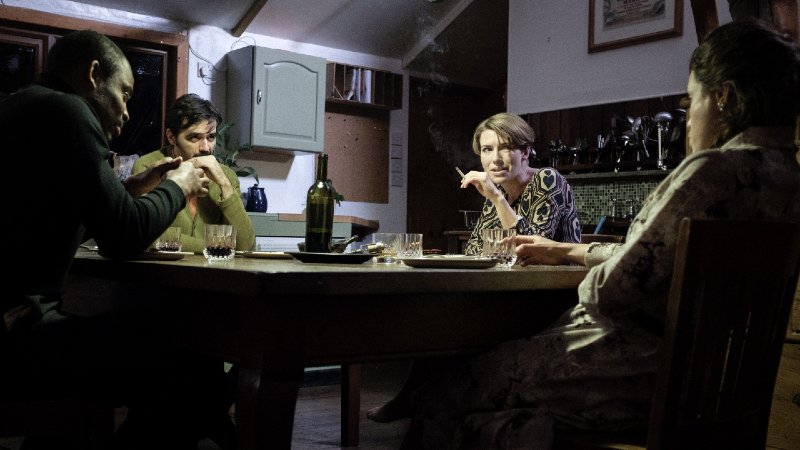 The inflections on the words, their mannerisms have the feel of actors learning their lines, scrutinising their meaning and how best to play the scene. It has the rawness of stage performance, a deliberateness, that the camera frame, the edit and the music creates a visceral hybrid of the sense of feeling provoked by the aesthetics of the screen and the stage.

The overall execution conveys the feeling that John and Alice are real people talking to one another, interrogating their thoughts and feelings. This is not authentic realism, it’s an expression of it within the scope of the cinematic language. The visual playfulness contrasts to the austere style of British social realist films, with words not always in synch with the action onscreen. We watch their tryst as we hear phrases that are likely from a post-coital conversation. The editing disrupts a natural chronological rhythm, the camera mimicking a person’s gaze and concentration gone astray.

If we are to find its roots, we should look to the Nouvelle Vague, that tried to convey realism through the art house aesthetic, as well as through plainer dramas such as François Truffaut’s Les Quatre Cents Coups (The 400 Blows, 1959), and the more stylised À bout de souffle. It’s here that Wilderness nestles itself somewhere in the in-between, as it attempts to find the border between reality and the realism of drama, always with an artistic sensibility.

The core moment of the drama is when John and Alice interrogate their besotted feelings for one another. They can only feel this impulsive attraction, but they cannot understand it. Wilderness is about how we try to find certainty, and specifically our habitual desire to want to hold on to a moment. This invariably creates anxiety, and these lovers don’t want to believe this intoxicated feeling will end up as only an emotional flash-point in their lives.

Together they experience the imperfections of love, a mix of angry words, as much as it is loving gestures. Neither can know what the future will hold, and the most significant observation is how falling in love is not only an act of exposing yourself to your lover, but how it’s a confrontation with your own vulnerabilities and flaws. Maybe Alice is right when she tells John, “Be an adult and live in your confusion.” It’s okay to allow ourselves to momentarily live in the future, but the confusion and uncertainty of our present is our home. The words “the end” pre-credits, is less of a statement and more a silent question, a fitting end to a captivating critique of the mysteries of love and lust.

Wilderness is available to stream on various platforms such as Amazon Prime, Google Play and YouTube.

Melancholy study of a Korean immigrant family in the Reagan-era US is leavened by winsome performances and cinema’s cheekiest child - available on VoD (and finally also on Sky Cinema and NOW) [Read More...]

Mother and son face each other off, in this probing American crime drama starring Elisabeth Röhm - from the London Independent Film Festival [Read More...]