Sex and death, the beginning and the end

As part of our Peter Greenaway series, Jack Hawkins looks at two inextricably linked topics that recur in every single one of his films

Peter Greenaway, one of British cinema’s greatest outsiders, is defined by his affinity for the Baroque masters Caravaggio, Rubens, Rembrandt and Velazquez, whom he deems the “first four film directors”. Naturally, their influence on Greenaway’s work is sumptuously visual; his films are galleries in motion, staged with exquisite symmetry. But despite the grandeur of his images, Greenaway’s films always return to the earthiest of subjects: the connection of sex and death.

The most obvious link between sex and death is one of narrative; sex causes beginning and death causes end – they bookend the universal experience. But the relationship between sex and death can also enter the depths of taboo, sometimes to the extremes of debased carnality. In every case, Greenaway’s films are about sex and death rather than a mere showcase of them, and they go against the grain of what he dubs a “deodorising, romanticising, and sentimentalising attitude towards sex and death” found in Hollywood fare. Viewers are made to feel both the visceral consequences of sex and violence and how human psychology and physicality can flitter between them. Everything outside of sex and death, Greenaway believes, is “ephemeral”.

This notion is seen throughout his work. Between the pillars of sex and death we see a medley of passing emotions and actions – pride, deception, jealousy, rage – and all of them are linked to the narrative of sex and death. An early example is found in The Draughtsman’s Contract (1982, last picture on this article), a quasi-murder mystery set in an English manor house during the late 17th century.

The titular draughtsman is Mr. Neville (Anthony Higgins), a cocksure young artist who’s commissioned by Mrs. Herbert to create twelve drawings of the estate while her obnoxious husband is away, allowing them to indulge the contract’s salacious clause regarding sexual favours. However, when Mrs. Herbert’s husband is found dead in the grounds, it transpires that she and her daughter have framed Mr. Neville. They humoured his arrogance and libido by

beguiling him with easy sexuality, earning Neville a roguish reputation among the extended family of the estate and making him easy to frame, which they do. Neville’s resulting summary execution concludes the death of Mr. Herbert, whose estate is transferred to his widow and daughter. This is sex and death as strategy and connivance in the 17th century culture of wealth, inheritance and legacy. And it’s all rather cold and calculated.

Peter Greenaway’s 1989 The Cook, the Thief, his Wife and Her Lover (1989; pictured at the top of the article) offers a surrealist, neo-Baroque vision of lust, masculinity and jealous sadism. Much like Mrs. Herbert, the wife Georgina (Helen Mirren), abhors her husband Albert (Michael Gambon). The thief is a repulsive gangster who parades her during nightly feasts at La Hollandais, his new restaurant. Albert holds court with Georgina and his goons, ranting, raving and even physically attacking his patrons. As he crashes through the restaurant like a human wrecking ball, Albert’s bullying reveals him to be obsessed with sexual prowess and virility. For instance, he tells his meek entourage to keep their trousers zipped because Georgina doesn’t want to see their “shriveled contributions”. He even mocks Georgina’s lack of maternity: “you’ve never had to use your tits”. Also, in an attempt to make a man of the young goon Mitchel (Tim Roth), Albert teaches him that mussels will make him “virile… they put hairs on your bollocks”. 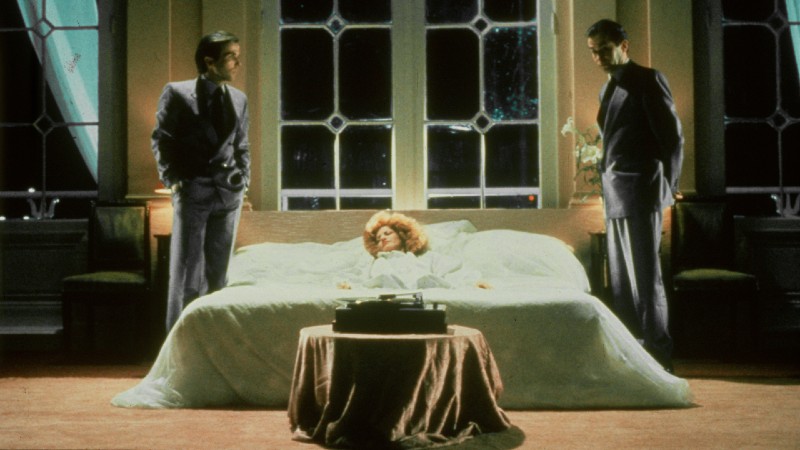 Disgusted by her husband’s boorish manner, she forms a lustful attraction to the lover Michael, an urbane gentleman in the restaurant’s corner. Soon, the attraction becomes an affair in the stark, whitewashed bathroom. They use sex as escapism, she from the thief’s uncouth savagery, and he from his bookish intellectualism – but it is a reckless act. Fear hangs in the air. Their indulgence leads them on an inexorable path to death, because when the thief discovers his cuckoldry, vengeance is delivered cruelly and fatally. The lover’s death does not go unavenged, though. Prostrate with grief, Georgina persuades the cook Richard to cook her lover’s body, which is served to Albert at gunpoint in a Jacobean act of revenge. She makes a mockery of Albert’s obsession with sexual power, telling him to “try the cock… it’s a delicacy, and you know here it’s been”. As he sinks his teeth into the lover’s flesh, Georgina puts a bullet through his brain, punishing him for his final act of consumption.

This horrific denouement confirms The Cook, The Thief as a revenge tragedy loaded with the entwining instincts of sex, violence and death. We see the visceral cause and effect of these instincts, how lustful sex is punished with deathly violence, begetting the wife’s final act of vengeance that is satisfying as it is macabre and morally dubious.

Although The Draughtsman’s Contract and The Cook, The Thief, his Wife and Her Lover brim with the idiosyncrasy, style and themes for which Greenaway is best known, it is A Zed and Two Noughts (1985; pictured above) that is the quintessential example of his work. That is because Greenaway values image over narrative, and A Zed and Two Noughts is perhaps his most visual and metaphorical film. The static camera compositions border on exhibit and installation.

The story – a meditation on the randomness of birth, death and decay – concerns Oliver and Oswald, twin zoologists whose pregnant wives are killed in a car crash involving a large swan. Wracked with pain and loss, the characters attempt to rationalise the terrible accident through the prism of evolutionary biology.

Oswald creates obsessive time-lapse videos of decaying animals, while Oliver forges a strange bond with snails – “I like snails because they’re a primitive form of life and they help the world decay… and they’re hermaphrodite and can satisfy their own sexual needs”.

The pair also become wrapped up with Alba Bewick, the lady who was driving during the accident, losing her legs and a pregnancy of her own in the process. They blame her for the crash yet become sexually involved with her, forming a morbid love triangle in which the brothers can’t tell the difference between pleasure and grief.

An example of their jumbled prejudice occurs when Oliver learns of Alba’s abortion of an earlier pregnancy, leading him to accuse her of purposefully crashing the car to induce miscarriage. It is here that – despite the brothers’ scientific discipline – a biblical bent is revealed in their attempt to understand their wives’ death. Earlier in the film Oswald bites an apple and puts it under a spotlight, recording its decay. Later, we see this footage of the rotting apple as Oswald talks of decay beginning ‘near the womb’, drawing a parallel to the scene in which Oliver places an apple in Alba’s lap as she lays broken in a hospital bed. This absurd allegation – that Alba has intentionally destroyed the fruit of her womb – is derived from one of humanity’s oldest tales of sex and death: Eve’s seduction of Adam, bringing sex and mortality into the world.3

This biblical reference is an obvious reminder that the subject of sex and death’s connection does not begin with Peter Greenaway. For example, the old French expression “la petite mort”, meaning “the little death”, likens the sensation of post-orgasm to death. Orgasm, like death, is an escape from the stressors and banalities of life. One may pursue orgasm in order to achieve dissociation, to disconnect from their thoughts, memories and surroundings. Those tying a noose or raiding their medicine cabinet will have similar aims, for death is the permanent realisation of this. The act of autoerotic asphyxiation is for the compromisers; until la petite mort is fatally prolonged, that is.

An obscene act, some may say, but positively chaste in the dark world of the Marquis de Sade, the infamous 18th century French aristocrat whose writings on sex, violence and death would cause German psychologist Richard von Krafft-Ebing to coin the term “sadism”, in reference to the nobleman’s surname. Marquis de Sade turned sex on its head; instead of affection, sensitivity and even the quaint notion of love, his sexual behaviour was powered by cruelty, selfishness and violence, traits that he loaded into his writing. 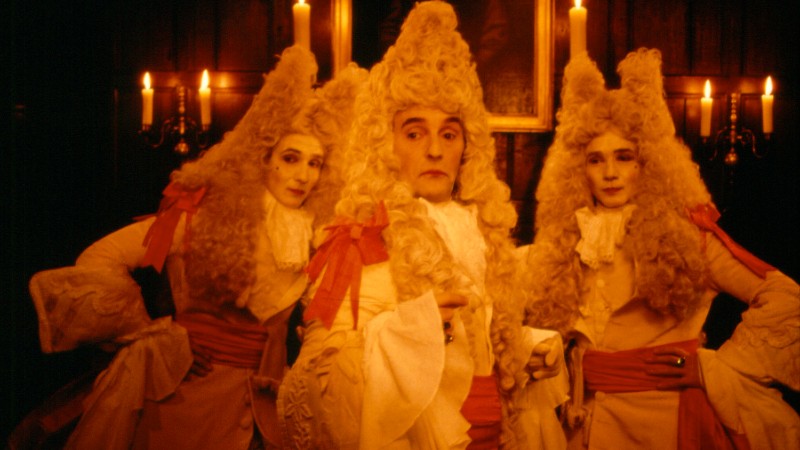 Perhaps the most revealing insight into Sade’s sex addled brain is his 1785 novel 120 Days of Sodom, which he deemed “the most impure tale ever written”. The premise concerns four affluent male libertines who conspire to achieve peak sexual gratification by keeping 36 teenagers, both male and female, in a Black Forest castle. As the title suggests, the victims are subjected to 120 days of exploitation, beginning with sexual abuse and torture that advances in sickening increments towards their slaughter. There is no clearer and more disturbing link between sex and death: libido can only be sated by murder. Pier Paolo Pasolini famously adapted Sade’s magnum opus into the film Salo, or 120 Days of Sodom (1975), set during the fascist era.

This grossly exploitative relationship between sex and death has manifested in contemporary works of fiction, with American Psycho (Mary Harron, 2000), the postmodern satire of greed and materialism, being a potent example. Patrick Bateman, its narrator, is a wealthy investment banker whose dedication to status and appearance has rendered him empty vessel of hate and prejudice. For Bateman, sex and death allow him to escape his vacuous reality in the most barbaric ways imaginable. Much like for the aristocrats in 120 Days of Sodom, death is the logical conclusion of exploitative sexual practices: he eviscerates the bodies of young women in a psychotic attempt to break the conditioning of his surface world.

It is impossible to ascertain whether relationship between sex and death is pleasurable or painful. Greenaway has said, “audiences love my films or they hate them–and the vehemence with which they hate them knows no bounds”.

Film professor Douglas Keesey derided The Cook, The Thief as a “putrid, pointless and pretentious piece of filth”, while film critic Gene Siskel named it a ‘bold, strident, purposefully aggressive film’. Then consider the legacy of Marquis de Sade, some regarding him a great writer and philosopher, others the personification of evil. It is not uncommon for a transgressive subject like sex and death to provoke such strong reactions.

There will be those who are compelled and those who are merely offended – and it is often knee-jerk reactions of disgust that are the loudest. “Pleasurable” might not be the best word to describe the feelings of those compelled by the relationship between sex and death and its depictions. Pleasurable in so far as they are intellectually stimulated, perhaps, but not pleasurable in the common sense of the word, that the link between sex and death is somehow enjoyable. What a pain!

P is for painting, P is for puzzle; P is for Peter Greenaway

As part of our Peter Greenaway special series, our writer Redmond Bacon discusses the intimate connection between cinema and painting [Read More...]