Poly Styrene: I Am A Cliché

"Dirty gem"
The fascinating life of frontwoman for the British the punk rock band X-Ray Spex is the subject of this documentary, directed by the singer's own daughter - available on all major VoD platforms

This is a very personal account of the life of Poly Styrene, whose birth name was Marianne Joan Elliott-Said. The film is co-directed by Celeste Bell, Poly’s only daughter. Celeste narrates her mother’s complicated and endlessly fascinating life. The documentary uses the book Dayglo: The Poly Styrene Story: The Creative Life of Poly Styrene as its blueprint. Celeste compiled the book with music journalist Zoë Howe. Howe is also a credited writer on the film, along with Celeste and her co-director Paul Sng.

The film provides an excellent overview of her life up to her death of metastatic breast cancer in 2011. Poly Styrene is well known for being the lead singer of the early British ‘punk’ band X-Ray Spex, which was musically more adventurous than most of the first wave of punk. Sonically, they are more akin to post-punk than the Sex Pistols or The Clash, and the addition of Lora Logic on saxophone was one of many aspects of the band that made them stand out from the crowd. Poly was a mixed-race woman of Somali and Scots Irish descent, which was rare in the punk scene around the Roxy in London, and she had a fashion sense that was out there even for punk, with her love of plastic neon clothes, military jackets and helmets. She also famously wore braces on her teeth.

X-Ray Spex blew up in a big way, and was one of the first British punk bands to be commercially successful, with three of their five singles landing them on Top of the Pops. The songs were rallying cries about consumerism, environmentalist, identity and capitalism. While Styrene was a feminist, she also had an ambivalence about being labelled as anything. She was always going to do everything on her own terms.

The film quite effectively refutes the talking heads route in favour simple audio interviews with band members, friends, family and admirers like Kathleen Hanna and Thurston Moore over the top of a treasure trove of archival footage, news clippings, photographs and flyers. The film may slightly suffer from one or two unnecessary scenes of Celeste rummaging through her mother’s belongings, but it’s also Celeste’s story of coming to terms with her complicated relationship with her mother. 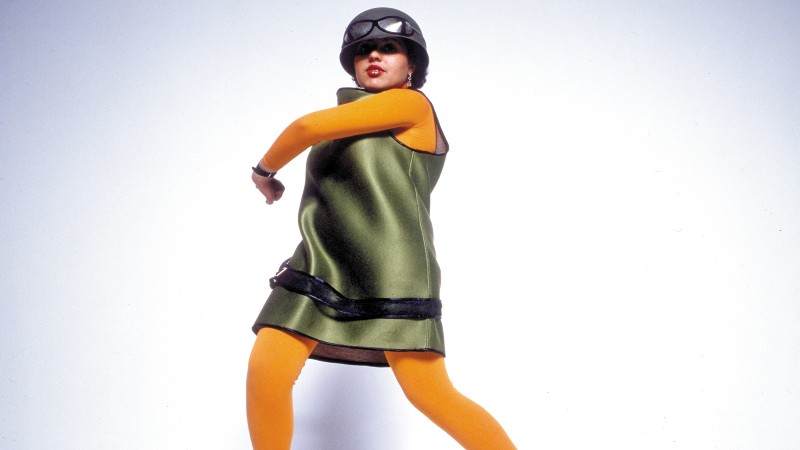 America was calling, and specifically the birthplace of “punk” as we know it today, CBGBs in New York. X-Ray Spex did a legendary residency at the venue, but it changed Poly. It’s not completely known exactly what triggered it. Was it maybe mental illness? Was it too many drugs? Poly lost her innocence, and by the end of the year she had a serious mental breakdown, which coincided with the split of X-Ray Spex. It’s a cautionary tale of the insane pressures of fame, which play havoc with the mental well-being of young women in the music industry. That topic is very much in the news today with the movement to end the conservatorship of Britney Spears so that she can have some control over her life instead of her lecherous father. In her own fashion, Poly eventually found some peace, but repeatedly in the documentary band members express regrets that they didn’t take a break or take her mental illness more seriously. She would end up being sectioned and misdiagnosed with schizophrenia in her early 20s.

Celeste narrates in an upfront fashion the difficult childhood she had with a mother who was always dancing on the edge. Celeste was born in 1981, the year after Poly Styrene’s ill-fated attempt at a solo career with her baffling twee-jazz album Translucence. Poly soon became a devoted Hare Krishna, and spent a large chunk of the ’80s living at temples around Hertfordshire and London, often neglecting her young daughter. The film does fail to mention the short-lived reunion of X-Ray Spex in 1995, which spawned a second album, instead focusing on the 2008 Roundhouse show (which I’m still kicking myself for not attending) and her final solo album, which came out just weeks before she succumbed to cancer.

Poly Styrene: I Am a Cliché certainly focuses on the good times. Two thirds of the film portray her early life and meteoric rise to fame with X-Ray Spex, yet it’s not afraid to delve into her complicated later and troublesome life. Poly’s relentless individualism is completely on show and will inspire generations to come. Poly’s story is a perfect reminder of how punk liberated everybody, especially this sensitive soul with braces who would’ve never started a band if it weren’t for seeing the Sex Pistols in 1976. If you don’t own the Germfree Adolescents album and the singles already, you will be hunting them down on Discogs and eBay – heads up, they aren’t so cheap these days. Hopefully a big reissue is on the cards for the near future.

Poly Styrene: I Am A Cliché showed at year’s virtual edition of SXSW. Available on all major VoD platforms from May.