"Mostly clean movie"
Biopic of Alan McGee, the co-founder of Creation Records who changed the face of British music, is just as messed up as the man it portrays - on Sky Cinema on Friday, March 19th

Ts is extremely loosely based on Alan McGee’s eponymous memoir, although the book is never credited. McGee was the man who founded Creation Records and also managed most of the Creation bands, up to and including Oasis, and who made them into a very big record company. That is the least interesting part of the entire story, of course. Creation Records had its origin in the post-punk era, and the first band they signed that had any major impact outside of indie-pop circles was The Jesus and Mary Chain. They were followed by a string of great acts like Primal Scream, My Bloody Valentine, House of Love and Teenage Fanclub.

The film is directed by Nick Moran, who is better known as an actor (and turns up here as Malcolm McLaren). His previous films include Telstar: The Joe Meek Story (2008), a far superior movie film about British pop music. The script was written partly by Irvine Welsh (how much of it is questionable) and Dean Cavanaugh, who is working with Welsh on another project.

Creation Stories is a mess of epic proportions. It desperately wants to be 24 Hour Party People (Michael Winterbottom, 2002). I was surprised that Tony Wilson doesn’t show up—they were friends, so why not? The story is wrapped around an interview with a female journalist called Gemma (Suki Waterhouse), who McGee keeps meeting up with throughout the ’90s, and ends at an unspecified, more recent time. The timeline is fractured, although there are long chunks that are chronological. It starts with McGee (Ewan Bremner, i.e. Spud in Trainspotting) being a glam kid, then punk happens, and he escapes his abusive dad in Glasgow (played by Richard Jobson of The Skids) for a move to London.

The very best scene in the film is when McGee books Television Personalities. It’s a joyous sequence, and the only one where the band is actually live. That makes all the difference. The pop art anarchy of Television Personalities is on show, and it’s a beautiful mess of a performance. They were the band that inspired McGee to start thinking about releasing records himself. It’s also good to see a nod to Dan Treacy, because he got brutally beaten some years later and has been in a assisted living facility ever since.

Strangely, the movie rarely mentions McGee’s own band until 1991, Biff Bang Pow. They only briefly appear as the support band at the Television Personalities. McGee always longed to be a pop star himself, which might explain his later excesses. The band was named after a song by The Creation, which also lent its name to the record company. This is never mentioned in the film.

Soon McGee is introduced to Joe Foster, played by Michael Socha, who gets plenty of screen time. Foster was important to the story: he was Television Personalities’ manager and occasional guitarist, and became the in-house producer for most of the early records released by Creation. The film zigzags back and forth in time, and eventually gets to where the peak should be, with the rise of The Jesus and Mary Chain. 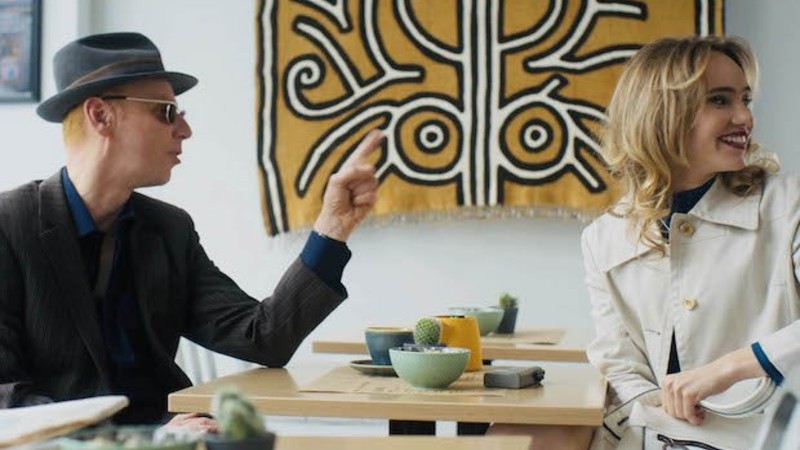 The live Mary Chain performance is satisfactory, but the actors don’t look that much like them. There’s that eureka moment for McGee, and then another when he sees Oasis at King Tut’s in Glasgow. There’s also an interview with The Jesus and Mary Chain. The band gave notorious interviews, where they deliberately messed with journalists—e.g. saying Joy Division were awful when actually they loved them. The actors playing the Reids look a bit too old and and not cool enough. Even their famous hair is off. This sequence is a hodgepodge of interviews available on YouTube. A 49-year-old Bremner is way too old to play McGee, who was 23 when he founded Creation Records.

The story of McGee as a manager lacks a few well-known moments, like his being fired by JAMC at Wimpy’s. That would have been a great scene—why isn’t it there? Bobby Gillespie’s hair in the interview scene is also completely off, it’s quite long. He doesn’t have this infamous bowl cut, which every indie pop kid has since tried to copy.

This is a very cheap-looking film. The picture montages (from magazine covers such as Mojo and Uncut) have a strange aspect ratio, and archive footage is often distorted by stretching it too far. There are some poorly-crafted hallucinatory scenes, including one in the toilet, reminiscent of Trainspotting (Danny Boyle, 1996). At least there are a few laughs and funny lines as McGee get into amusing situations.

And then there’s the Jimmy Saville scene. Those who know the McGee story know that when Oasis got big, they were co-opted by New Labour as part of their bogus “Cool Britannia” publicity. Something McGee now deeply regrets. There is a very strange scene when they are at Blair’s mansion (Blair too is miscast) and Saville shows up. McGee is creeped out by Saville. His narration mentions the Public Image Ltd. interview in which Lydon said Saville was a paedophile in 1978. But that interview was never broadcast, so how would McGee have known? Painting McGee as a crusader against paedophiles is a very awkward revisionism. All in all, the filmmakers did not spend much time doing their research. And with a film that needs to appeal to hardcore fans, that’s a big mistake.

Creation Stories is out on Sky Cinema on Friday, March 19th.