The Obituary of Tunde Johnson

Tunde Johnson (Steven Silver) is a high school student of Nigerian heritage. He lives with his well-to-do parents Yomi (Tembi Locke) and Ade (Sammi Rotibi), in the smart end of Los Angeles. They are part of the right on, sophisticated middle class that inhabit Lalaland. Tunde even goes to therapy once a week.

Tunde, however, dreams that he is on his way to a friend’s birthday party but is pulled over by the (white) police and is shot. He dreams that he is inoffensively walking down a suburban street and is suddenly tackled to the ground by the police. He dreams that he is standing outside a supermarket and is wrestled to the ground and choked by the police. After each of these dreams a solemn voice announces his death and the dates of his short life. This happens several times in the film and with it brings a recapitulation of events up until his death.

This includes Tunde going up to an open balcony space at his high school where his friends socialise. Among these friends is Soren (Spencer Neville) to whom he is making love in an out of the way old warehouse. Another person who has her eyes on Soren is Marley Myers (Nicola Peltz), who is having vigorous sex with Soren in the same warehouse. This causes Tunde anguish as he loves Soren. So, Tunde is conflicted in his gayness, which his boyfriend Soren is not prepared openly to acknowledge for fear of the social consequences, and his blackness which can, in the U.S.A., be lethal. 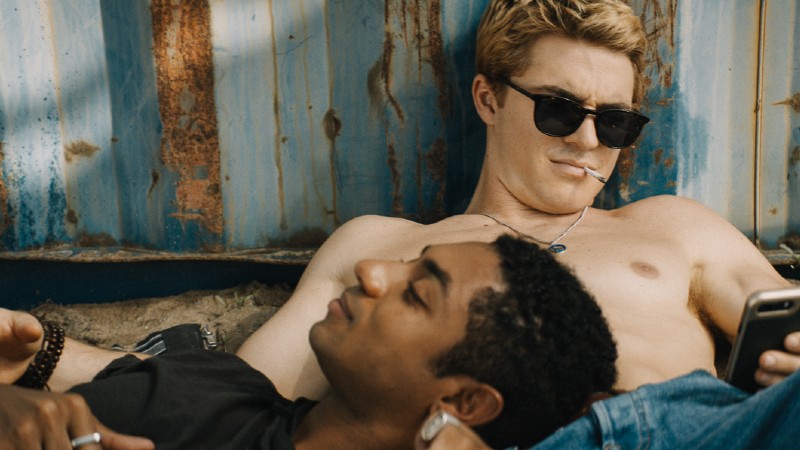 Valid although these concerns are, this film does not sustain its focus. Tunde is by any standards a very privileged, young man. His parents are not old-fashioned Africans. Indeed, his mother starts talking about finding him a “nice boy” as soon as he comes out. If the police are so stupid to pull over a black person in a car in Tunde’s neighbourhood, they are as likely to find Spike Lee or Denzel Washington behind the wheel as a kid from the ghetto (class matters in America too).

Los Angeles is hardly lacking in gay people. True, Tunde is stuck at his high school, having to put up with the talent on offer. Soren may be gay, but he could also be bisexual. Either way, he is a sniveling little coward. He sits on a sofa opposite Tunde’s parents assuring them how much he loves his son and then he is next seen at a party beside Marley as they were a unit. Marley is also hopping mad with Soren. When Soren has an opportunity to tell his right-wing talk show host father that he is gay (with Tunde sitting beside Soren), all he could do is say how hurt he was that his father didn’t turn up at his last lacrosse game. Tunde needs to find a new partner. After high school he needs to go out into LA and find that man that really values him, whatever his identity.

Indeed, the most effective moment in the movie on race is when Marley tells Tunde that Soren may be having sex with him, but he wouldn’t really want to be to be seen with the likes of Tunde when it comes to anything more important than sex. For social reasons, Soren needs a white girl like Marley. This is racism on stilts. Tunde has to realise that, however, privileged he is, he is only OK for sex. This where this movie makes a very valid point about the blank wall of racism that many black people have to contend with everywhere. This is more effective than continuous reenactments of black people being shot by white cops (which eventually become tedious).

The Obituary of Tunde Johnson premieres at this year’s virtual edition of BFI Flare: