Francis Lee’s follow up to the superb God’s Own Country (2017) is another story of forbidden love in a far-flung corner of England. Ammonite tells the story of real-life palaeontologist Mary Anning (Kate Winslet), noted for her discovery of rare fossils along the English coastline during the 19th Century. Making a living from selling artefacts and tourist trinkets from her small shop, her reputation leads her to meet aristocrat Charlotte Murchison (Soairse Ronan). Murchison’s husband (James McArdle) pays Mary to allow Charlotte to shadow her in her work. After an initially frosty reception, the pair begin to fall in love, and find a kindred spirit amongst the rocks.

The drama comes to the screen with a small amount of controversy. Many have argued that Anning’s sexuality was never disclosed, with evidence pointing to her and Murchison only being friends. Lee has defended the choice, rightly arguing that there are many historical figures who are ‘assumed’ straight, and that LGBTQ+ stories are often erased by both cinema and historians.

Arguments aside, is it any good? Disappointingly, considering God’s Own Country sidestepped so many Queer Cinema conventions, Ammonite feels like a film we’ve seen many times before. The story feels detached, never truly getting to the heart of who these two women are. Filmed with minimal flourishes and sparing dialogue, instead of filling silence with subtext, there are many moments when the audience and cast simply stare at each other. 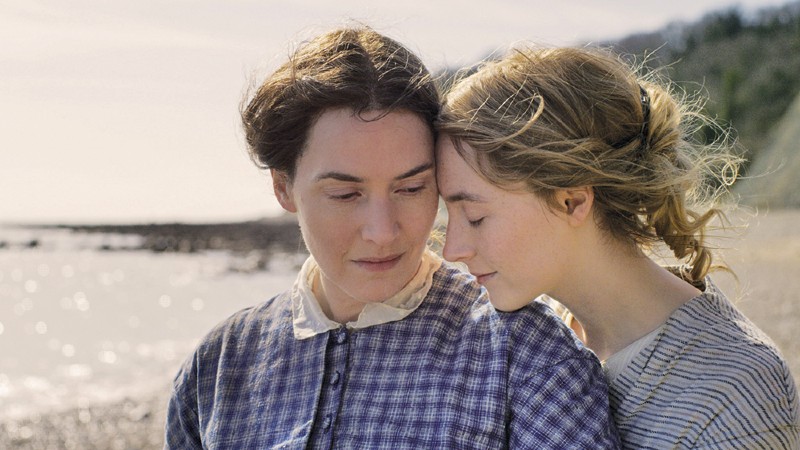 It doesn’t help that the subject is thematically quite close to Céline Sciamma’s wonderful Portrait of A Lady On Fire (2019), which bursts with passion where this film shrinks with introspection. There is, of course, the elaborate love scene that often comes with awards season LGBTQ+ stories, which balances the grit of Lee’s filmmaking with the unleashed desire of the characters. They feel like moments of truthfulness, rather than something crammed in to make headlines.

Any film starring two of the most talented performers working today is lifted simply by their presence. Both convey characters whose true nature is suppressed by a male-dominated society. Ronan does a lot with the sparse characterisation, trying to excavate Mary’s true nature just as the pair do with fossils.

It’s Winslet who is the real winner, however, given the extra dimensions of the role. Brusque and unwelcoming to begin with, an abusive relationship with her mother (Gemma Jones) and doomed past relationships make Mary’s inaccessibility understandable. The British actress shines in the film’s final act, where it becomes increasingly evident that the couple’s pasts create a barrier to their future.

Ammonite is missing an extra dimension, that devastating blow that makes these stories of forbidden love unforgettable. Despite the efforts of two wonderful actors, it is perhaps destined to be one of those films that becomes lost in the awards season shuffle.

Ammonite is out on all major VoD platforms on Friday, March 29th.