In the opening of Spiral, the first short movie, the gay couple Karim (Alexander Abdullah) and Dan (Emil Lindberg) make love shortly before they fly off on a trip. Dan says that he must leave their flat for “one last thing.” Karim, suspecting that Dan has been gone too long, must dive into the underbelly of nightlife in Malmö in order to find Dan. After several enquiries, he ends up in the flat of a man called Olsson where he makes a horrific discovery. This film is about obsession, sadism and the weird end of the male gaze. It seems to follow a miserabilist tradition in gay filming. Directed by Gustav Olsson, this is the least satisfactory of the five offerings.

Floating Melon is fun even if it doesn’t start off that way. Set in the Chinese city of Chengdu, two gay men (Vincent Xi Chen and Sirui Wen) make vigorous love in a sparse flat, aided by drugs. After waking up in the morning, the host finds that his guest is not reacting. Terrified that he has killed him with the drugs, he flees the flat to two female friends to enlist their support to get rid of the body. When they get back to the flat, the body has gone. Horror! How will they solve this mystery? Well, they do with the help of a large, rubbish disposal barrel but I won’t tell you how. It’s amusing. The two directors Roberto Canuto and Xu Xiaoxi created an accomplished little dirty movie.

Poof (directed by Dean Anderson) is a predictable enough gay film of a sort that has been made by many others, but it is no less worthy for that. Aaron (Aiden Nord) is a nice lad who meets a pleasant, older man Mike (Miles Higson) just outside a party. His dad (Howard Harling) is a nice guy too, although he is a bit worried that the shirt, he is trying on for an evening out is a bit too “poofter”. Aaron helps his dad in his building business. Aaron manages to get the weekend off from helping his dad. He spends an idyllic weekend with Mike but when he returns and has spent too long away from home, his dad is none too pleased. Eventually, he abandons Mike because he cannot tell his dad that he is, after all – a poof. This sort of tragedy is acted in any number of towns all over the world, never mind Britain, and makes the film worth viewing for that. 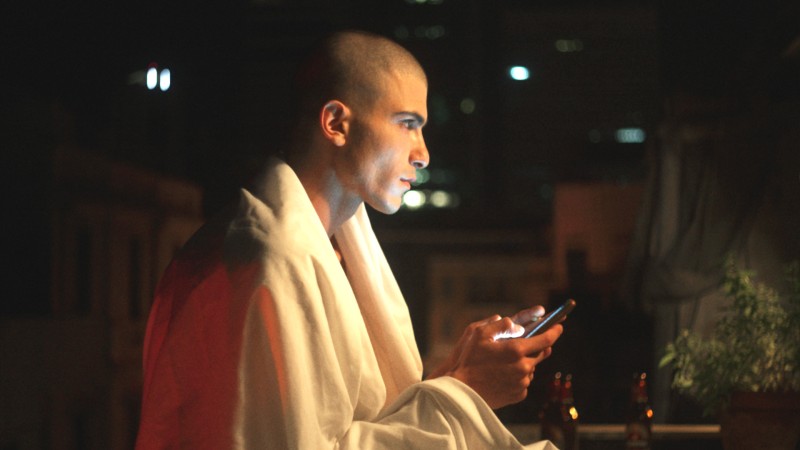 The tragedy is acted in Poland as well as we see Pawel (Piotr Biedron) meet up with his lover Clément (Tijmen Govaerts) from Brussels. Clément, a typical Western European, is totally relaxed about his gay identity. Pawel is anything but relaxed. Stuck in a soulless post Stalinist housing estate, surrounded by among others, female friends who have their eye on Pawel, Pawel is terrified that his gayness will be discovered. Clément tries to initiate an evening of love making but Pawel leaves him. Clément must retire to bed but then suddenly Pawel comes to him and there then commences one of the tenderest gay loves scenes I have ever seen. Torn between passion, hesitancy and tenderness (Pawel puts his fingers over Clement’s mouth to make sure he doesn’t make any noise), both actors deliver a performance that is extraordinarily moving. Pawel ends up in tears at the end.

Night of Love is a cheerful, life-affirming film from Israel. Yonatan (Omri Loukas) is a fit, 18-year-old hunk serving in the Israeli army. Despite his attractiveness, he is lonely and very naive. His parents live apart and his tiresome partner Orek won’t put him up over the weekend. He turns up at a contact Saïd’s flat in Tel Aviv, where he is invited into a gay sex party. The party is relaxed, where men cheerfully hump each other on the sofa, while others stand around and snort substances. There he catches the attention of Saïd, an older Christian, Palestinian, gay man. A foursome breaks out but Yonatan is worried about the lack of condoms. The other men find this boring and declare that they are off to the sauna. Yonatan is then left alone with Saïd, who makes love to him vigorously. Yonatan is worried in the morning that he must rush away. Saïd is sad to see him go but tells him how much he adores him and wants to see him again. The kind older man affirms Yonatan without any reference to the differences that separate them. On his way back on the train, Yonatan catches the gaze of a very dignified, old lady opposite him. His gaze is severe, masculine and very military. She exudes wisdom and understanding. Eventually they both break into a smile, looking at each other. This is a film about kindness, how difference can surmount appearances if people will only meet each other as they are.

The Male Gaze: Nocturnal Instincts is out on Amazon and Vimeo on Monday, March 15th.

NQV Media presents five short films from Sweden, Switzerland, the Netherlands, Croatia and Kosovo well worth looking into for their sensitive portrayal of masculine problems round achievement, protection and love - on VoD on Monday, February 8th [Read More...]