The first fiction feature by Hungarian writer-director Dénes Nagy, Natural Light, which has just world-premiered in the Berlinale’s Competition, is a story of the human condition, set in that most testing of environments: war.

Corporal Semetka (Ferenc Szabó) is one of 100,000 Hungarian soldiers who supported the German troops in their attack on the Soviet Union in WW2. His unit is tasked with rooting out partisans and controlling the population of the occupied territories. As the film opens, they are in a thick forest, and as they reach a river, they find two men on a raft with a moose carcass. Sure enough, the soldiers will cut all the meat off the bones, right there on the raft, and leave the men with just the skeleton.

As they trudge on through the mud left by the recently melted snow, they reach a small village and set up camp there for three days. They eat the villagers’ food and sleep in their beds, like occupiers would. We do not witness any torture or rape, but they do visibly wield their power.

Once the company decides to move on down the path suggested by the village chief, they run into an ambush, and the company’s commander is killed. Semetka is now the de facto leader, and they return to the village, where they find the chief killed, with a “traitor” sign hanging from his neck. They round up all the villagers and put them in a barn, and soon, reinforcements come: a larger, better-equipped and definitely more cruel company, led by a major who turns out to be Semetka’s old friend. 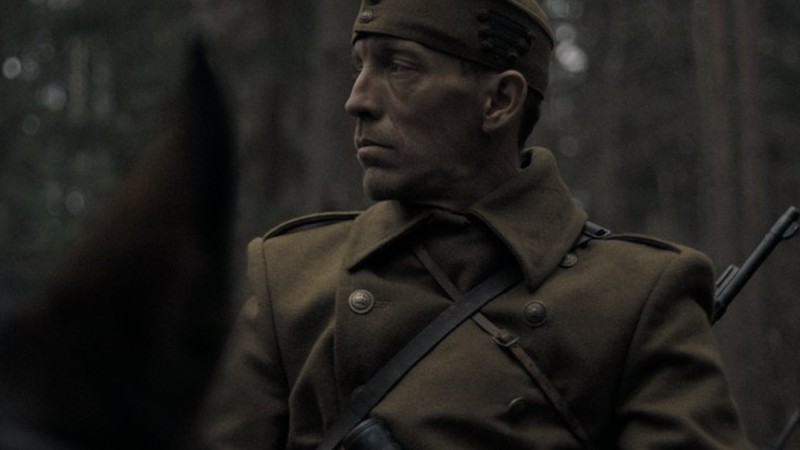 Nagy based the script on the eponymous novel by Pál Závada, which actually covers the period from 1930-1950, and the filmmaker only used three days of it in 1943 for his film. Starring non-professionals cast in rural Hungary, there is barely any dialogue. Semetka represents the most human contradictions in us: he protects two young women in the village, but not to the extent where it might put him in danger. While he is stony-faced during most of the film, apparently always weighing up his options, the other soldiers act more like you would expect a bunch of occupiers to behave, getting drunk, talking dirty about women and harassing the villagers.

Semetka is not like this. He is the subject of DoP Tamás Dobos’s camera most of the time or, more precisely, his face is – a tad handsome in that folksy, weather-beaten way, and always thoughtful. Since Szabó is not a professional actor, what we feel and think about him comes from the context that Nagy builds around him. His World War II is the dusk of a civilisation, a world fading away like the saints in the icons of the bare-bones Russian Orthodox church near the end of the film.

Natural Light is a hardcore auteur film, intense, slow and deliberately paced. The silences between the rare lines of dialogue are filled with impressionistic sound design, and while the violence always happens off screen, and often away from Semetka’s eyes, Nagy makes sure we hear everything.

Filmed in Latvia, almost the whole film happens in a thick forest, where the dark greens and browns overlap with the colours of the soldiers’ uniforms. This visual murkiness is likewise related to the dreary human condition in the most inhumane of times, as one man tries to hold on to his humanity – but also stay alive. One does not have to think too hard to find a parallel with today’s world, and with our own condition.

Natural Light has just premiered in Competition at the Berlinale. It won the Silver Bear for Best Director.