Eye of the Storm

"Dirty gem"
Documentary investigates the life and the work of late Scottish painter James Morrison, and it's as aesthetically accomplished as its subject - in virtual cinemas on Friday, March 5th

James Morrison (1932-2020) was one of Scotland’s most accomplished landscape painters. The British Royal family own several Morrison paintings, as does J. K. Rowling. Documentary filmmaker Anthony Baxter (You’ve Been Trumped, 2011) followed Morrison for two years as the artist battled fading eyesight while aiming to create one final landscape painting. This led to the creation of Eye of the Storm, in which Morrison serves as the narrator and central figure as the documentary chronicles his artistic journey from his college days in Glasgow to his final solo exhibition, From Angus to the Arctic (January 2020) at the Scottish Art Gallery, Edinburgh.

While watching a film on a renowned painter, it is inevitable to draw comparisons with films of the past, on famous painters. They include Pirosmani (1969) by Giorgi Shengelaia on Georgian primitivist painter Niko Pirosmani and the 2010 film Nainsukh by Amit Dutta on the eponymous 18th-century Indian miniature painter. Unlike Pirosmani – which focused on the artist’s tragic personal life – Eye of the Storm traces Morrison’s career and interlinks his significant works to various events in the painter’s life. In that sense, Baxter’s film is more similar to Nainsukh.

It becomes somewhat mandatory for a film dealing with painting as its subject to be aesthetically accomplished and Eye of the Storm doesn’t disappoint. The film’s aerial photographer Graham Black captures some breathtaking visuals of Scotland’s lush farmlands, meadows, majestic mountains near the coast of the North Sea, and the ice-cold beauty of the Arctic region. Baxter, who also dons the role of editor and cinematographer employs wide-angle shots to replicate the vast landscape and skies portrayed in Morrison’s paintings. He intelligently uses the music of Dominic Glynn and Karine Polwart’s songs to accentuate the beauty of the Angus landscape and also to heighten the emotional quotient of the film during key moments.

Some of the past incidents of Morrison’s life have been recreated through animation done by Catriona Black, who takes us through her process in the film. I was reminded of Amit Dutta’s films which bring alive miniature paintings using animation done by his wife Ayswarya Sankaranarayanan. Catriona Black’s work during the sequences in the Arctic of Greenland stands out from the rest. Baxter also intersperses archival footage of old BBC films that had documented Morrison’s life in Montrose during the ’70s. The other aesthetic highlight of Eye of the Storm is the periodic insertion of intertitles on a black background displaying inspiring quotes from some of the greatest painters. 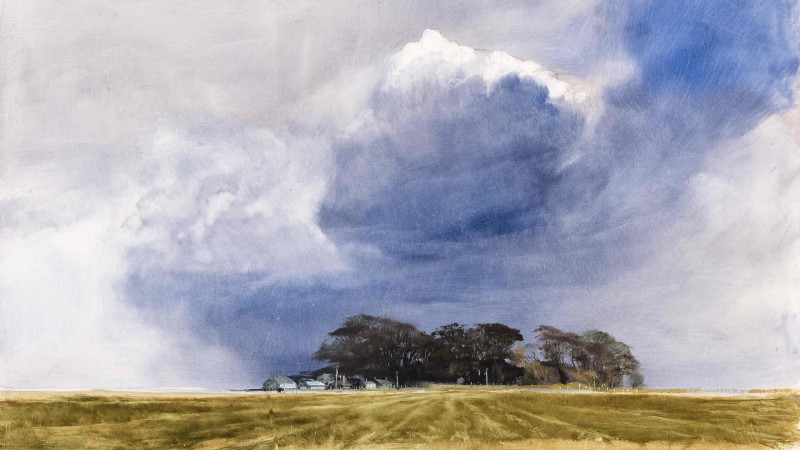 Born in Glasgow, Morrison started his career after graduating from Glasgow School of Art in 1954, by painting tenements and the city landscape. Even back then, he never included a single human in his paintings. In 1960, he moved to the fishing village of Catterline on Scotland’s east coast. There he painted some impressive seascapes and wooden fishing boats in the stormy ocean waves. Morrison moved with his wife Dorothy to Montrose in 1965, where he joined the Duncan of Jordanstone College of Art to teach painting for the next 22 years.

An old clip of Morrison in Montrose shows him talking reverentially about his friend and painter Joan Eardley who died of cancer at the age of 42. Of the various anecdotes shared by Morrison in the film, he speaks very fondly of his trips to the Sennelier Art Shop in Paris from where he used to purchase all his paintbrushes and colours. He gets emotional while showing his 2006 landscape painting A Lady Remembered, which he refers to as a portrait of grief since it was created after his wife’s death.

The film also has scenes of Morrison’s son John, who is an art historian, talk about the influence of pre-Impressionism era European painters on his father. Morrison’s writer and broadcaster friend Dennis Rice narrates the impact of Morrison’s paintings on him as they altered the way he saw and felt the world! Morrison was one of the few artists who has painted the untouched lands of the high Arctic regions. He jokes that he might be the only painter to have held an exhibition in the Arctic. Eye of the Storm ends with the Scottish Art Gallery presenting Morrison’s 25th solo exhibition and the legendary painter gracing the venue with his presence, accompanied by his son and daughter. Six months later on 31st August 2020, James “Jim” Morrison breathed his last but his legacy lives on!

Eye of the Storm is in virtual cinemas from Friday, March 5th.

Roy Andersson's last film is less funny and yet no less potent than his previous features, and it is a fitting swan song for the peculiar Swedish auteur - on various VoD platforms from January 1st, 2020 [Read More...]

Documentary shows Donald Trump in all his magnificent repulsiveness, but unfortunately it's more an encore than a sequel to its sterling predecessor - on VoD on Tuesday, August 18th [Read More...]