"Dirty gem"
A young queer woman from Brighton struggles with many tempers, in a movie bolstered by the protagonist's performance - on VoD on Friday, March 5th

J[/dropcsp]ustine longs to escape. She’s told to go travelling. Others tell her to start teaching. And her psychiatrist thinks she’s hiding something. But Justine knows she isn’t. She’s following her heart in the middle of urban Brighton. Justine happily spends the time ticking away the hours that make up the dull day by traipsing the very beach that has attracted so much custom. Caught in the perfume of youth, Justine distracts herself in a series of endearing escapades, convinced that the town isn’t drowning her like everyone tells her it is. That is, until she sits alone in her bath, where the still water projects a demon even more ominous than the characters of her wildest imagination.

Jamie Patterson’s film follows a similar narrative beat to British comedy series Fleabag, and though the script isn’t as biting as Phoebe Waller Bridge’s, Justine is nonetheless a multilayered and gingerly made portrait of a woman on the verge of a nervous breakdown. But rather than throw herself in the arms of an uncommonly handsome priest, this character chooses alcohol as her way of escaping life’s cruel answers. Tallulah Haddon is excellent, doubling as the dilettante and the dejected person parading through Brighton’s crisp, kaleidoscopic streets. For it is here that legend and history have met, as the city that serves Justine as a teenage retreat, is also a bastion of Queer Rights. And with the arrival of Rachel (a particularly haunting Sophie Reid), Justine comes face to face with a ticket out of the precipice, and headfirst into the arms of an adult who loves her. 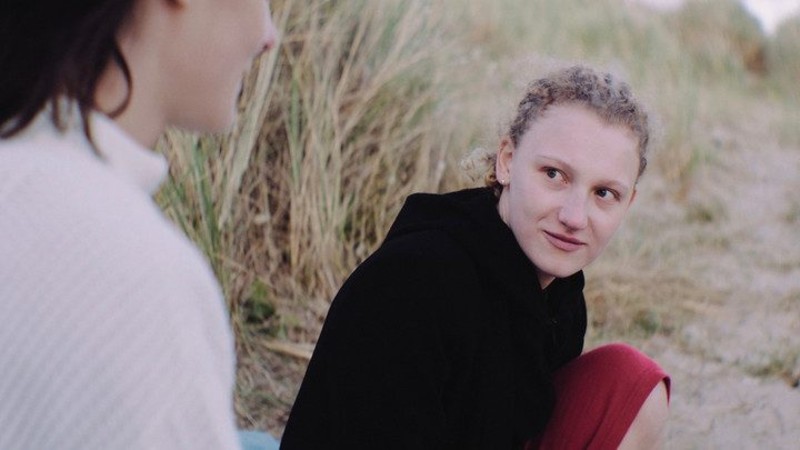 As a love story, Justine proudly takes hold of the decade it is set in, as the two women embrace each other in the front of a café’s parlour. However comfortable her situation, Justine finds herself unable to enjoy it, as each time she visits her parole officer she is reminded of her parents’ numerous failings. Rather than confront the past, Justine is reminded of the prescient importance of the here and now.

Brighton looks beautiful on screen. However, the most colourful and revelatory moments are those Justine shares on her own. Caught in the whirlwind of her thoughts, Justine forces herself to recount the many horrors that have stripped her from buoyant to brash, arguing with the many tempers that marked her life’s voyage. And beneath the palette of piercing, purple outfits that decorates her waif frame, Justine is ultimately a warrior battling with the weight of the world on her shoulder.

Justine is out on Curzon Home Cinema on Friday, March 5th.