"Dirty gem"
Wide-ranging documentary contextualises the tragic last days of Jamal Khashoggi in light of Saudi history, geopolitics and the pernicious influence of social media - from the online version of the Glasgow Film Festival

Lightning strikes twice for documentary director Bryan Fogel with sophomore outing The Dissident. His Oscar-winning debut Icarus (2017) was a jaw-dropping exposé of the widespread doping that plagues international sporting competitions; a found tale that evolved from self-experimentation and personal bests to something much bigger through the fortuitous discovery of key witness Dr Grigory Rodchenmov. Here Fogel walks a different path, with a story that has already been combed over by the press, the facts laid bare. It is no less astonishing for this. The sheer breadth of issues that feed into and reverberate outward from the death of one man deserve spotlighting and the ground covered by The Dissident may well frame upcoming legal, technological and political battles for decades to come.

To wit, in late 2018 Jamal Khashoggi entered the Saudi consulate in Istanbul to obtain marriage documents from his home nation. He never left. A staunch, unapologetic reformist and journalist, Jamal had spent many years away from Saudi Arabia after his vocal position against the authoritarian status quo became untenable. Living under a nebulous, existential fear during this time, he yet persevered with his message, pushing for democracy from exile and building the formidable media presence that sealed his fate. With one critical byline too far, Saudi operatives entered Turkey with the express purpose of assassinating Khashoggi in the consulate. The clinical plotting of the act and the murder itself were caught on tape by bugs previous planted in the building by Turkish intelligence and, understandably miffed by the extrajudicial killing on their soil, the damning evidence was then shared quite freely. It is a geopolitical clusterfuck of unprecedented proportions.

The Dissident thus weaves the tragic tale of Jamal’s final days through a kaleidoscope of history lessons, talking heads and somewhat ropey digital graphics. It is a tessellating spirograph of a Venn diagram, touching upon: Trump, Twitter troll farms, UN procedures, the investigations of the Turkish police, a potted history of Saudi Arabia, international cyber espionage, Jeff bloody Bezos and finding love in exile. Now breathe.There are a lot of plates to keep spinning and this is achieved admirably, with but the slightest of cracks showing in the crockery. Highlights include a primer to the insanely powerful position that Twitter holds in Saudi Arabia, with 80% of citizens on the service, and the glimpse into the deadly, extortionate court machinations of the Saudi royalty, more Game of Thrones than Game of Thrones. 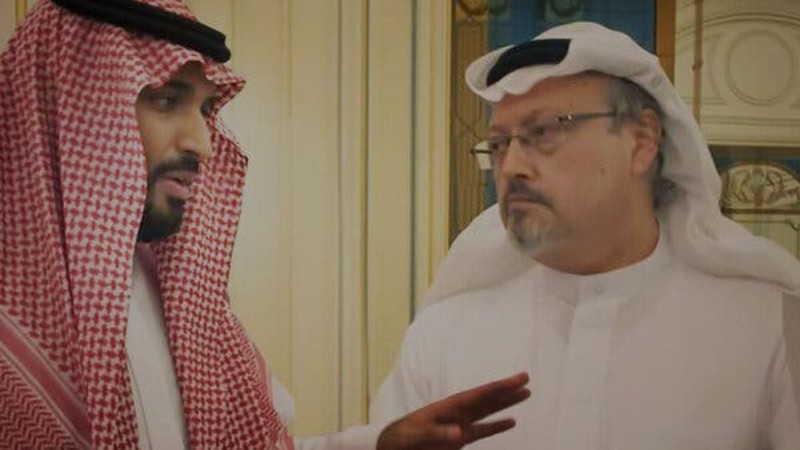 However, repeating a trick from Icarus, almost equal weight is given to individuals as to the big picture stuff. Indeed, The Dissident is a study in collating personal experiences. Each of the many interviewees are extremely forthcoming, with arresting testimonials helped along by the innate media savviness of people from the world of journalism or international relations. Props to the Turkish police and prosecution who are palpably disgusted by the brazen assassination on their home soil and Agnès Callamard, a UN special rapporteur attached to the case.

Most effective however are the segments that closely follow Hatice Cengiz, fianceé to Kashoggi, and Omar Abdulaziz, a younger, tech-savvy seeker of political asylum in Canada. Hatice was present on the day of the murder, forced to wait outside the consulate for hours on end with the dread certainty of something having gone wrong. She is a veritable wellspring of strength, forced to endure unimaginable sorrow and yet pushing for justice on the global stage. Conversely, Omar is weaponising YouTube and Twitter to criticise the Saudi leaders, despite his family and friends being held hostage in prison without formal charges. The film unpicks his relationship with Jamal in their final days and details their collaborative dissidence that may have given the final push to villainous Crown Prince Mohammed bin Salman.

Despite the smorgasbord of themes, some questions are conspicuous in their absence. The legitimacy of the transcripts from the consulate tapes is never questioned. There are interesting ethical and political quandaries to consider here, presumably jettisoned to keep the Turkish participants on side. Moreover, links between Kashoggi and Qatar Foundation International have emerged, an organisation from a Saudi Arabia rival. The idea of cold warring nations using proxy mouthpieces to undermine one another is intriguing but buried beneath the mountain of context and contributory factors. With that in mind, it is perhaps a story better suited to a multi-part documentary, with an obvious home on Netflix (other, less good streaming services are available). However, decisions have been made and the proof is in the final edit, constantly watchable throughout its two hour runtime. It is vital viewing for understanding an active, evolving situation with many trillions of international investment dollars on the line, thus shaping current global events. The film ends with an invitation to educate yourself. Truer words were never spoken in these trying days.