"Mostly clean movie"
Warring sheep herder brothers is a concept with legs, let down by clichéd storytelling and lacklustre everything else - now also available on Mubi

The Sam Neillaissance thunders on, showing less chance of stopping than the -aissance suffixaissance. Catapulted out of pre-2000s obscurity with winning, curmudgeonly turns in Hunt For The Wilderpeople (Taika Waititi, 2016) and the BBC’s Peaky Blinders, Neill is set for blockbuster stardom once more with his imminent return to the Jurassic Park franchise. Amidst all this excitement, time enough for a brief layover with Rams, a parochial tale of sibling rivalry set in the world of Australian sheep ranchers. It is a theme esoteric enough to suggest potential in the right hands, somewhat squandered here with an overlong and trite showing.

Colin (Neill) and Les (Michael Caton) own neighbouring ranches, inherited land split in twain by their bullish refusal to speak to one another. This is played for laughs, with establishing scenes showing them butting heads over fencing, gates and their shared dog. All the fun of the farm. Disaster strikes when an obscure ovine disease hits their flocks and the community entire is brought low, forced to terminate infected and healthy livestock alike and leave their lands fallow for two years. The contrasting responses of the brothers and the herder neighbours provides the meat of the film, with the looming spectre of perennial bushfires telegraphed throughout as a potential flashpoint. 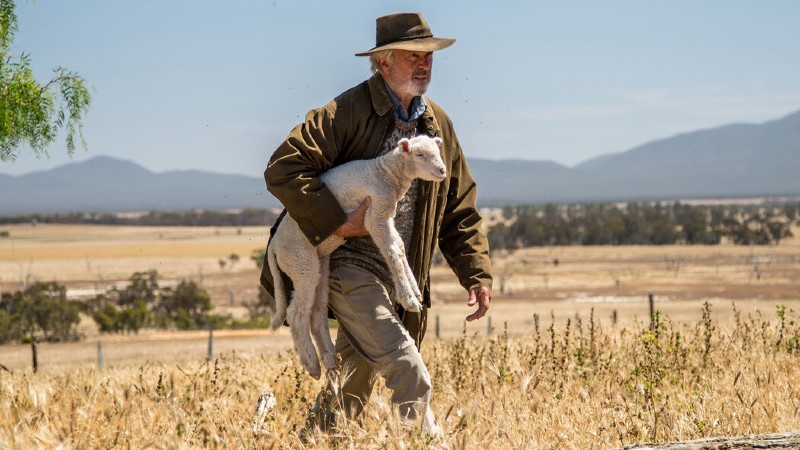 The film stakes all on Neill’s brusque affability, affording him the lion’s share of the screentime and he is reliably good here. The bond between man and sheep is sold well and the clumsy romantic through line with Miranda Richardson’s British veterinarian is fine. However, for a tale that revolves around the split between two men, the film is left as a one-and-a-half hander, with rum-steeped Les given little to do except act menacing and sozzled. A more even approach could give weight to their central dynamic but this is eschewed for drip-fed, drawn out storytelling over the true nature of their dispute (they each keep nostalgic photos of their childhood despite their differences!).

Alone, these aren’t issues that torpedo the film directly but the wider cast of characters and ensemble scenes drag the affair down further. Here, Rams cannot quite decide whether to pitch itself as a more serious affair or an out-and-out comedy. There are too many jokes for the former but not enough driving force for success as the latter. Aside from a few visual absurdities, nothing lands. Gags are either flaccidly specific sheepherding jokes or half-hearted Aussie bants from the other local ranchers, with none of the actors seemingly confident enough in the material to bother trying very much. Most egregious is the hapless Big City agricultural department rep (Leon Ford) who just doesn’t get that this very valley is built on mutton, damn it! The blasé nature with which he discusses disposing of the tainted herds whilst marveling at the lack of phone signal on an outback farm is meant to be funny, maybe? In another director’s film it might very well be. The whole project derives from a 2015 Icelandic original film of the same name. Perhaps something is lost in the translation of setting from icy tundra to scorched earth.

Rams is on Sky Cinema and NOW on Sunday, June 20th. On Mubi on February, 6th (2022). Also available on other platforms.