"Dirty gem"
The Frankenstein novel gets transposed into the life of Mary Shelley: the author gives birth to a monster just as she pens her masterpiece - on VoD on February 4th

You’ve seen the story of Frankenstein many times, but you’ve never seen it like this before. American director Nora Unkel pivots focus from the monsters and men that have steered the narrative for the last two centuries back onto the woman who birthed the modern Prometheus in the first place. And in keeping with a myth that long abandoned any sense of reverence to historical precedent, Unkel carves a story that cares more for the contemporary woman than it does for documenting the lives of those underserved by the protocols of the 19th century. As a treatise of despair, Unkel’s decision to work with a mixed race cast is not only bold, it’s brilliant.

Like many promising mothers, Mary Shelley lost a child early in her pregnancy, before burying her news somewhere deep in the vortex. As with most discarded truths, the words return with a mighty vengeance, swallowing a more wholesome Mary caught in the midst of love We find her on the lakes of Geneva, where poetry and passion intertwine in a challenge set by lord and laureate, Byron. There, drowning in the thoughts that have carried her across water, Mary (Alix Wilton Regan) channels the history she has shared with her Percy ( Giullian Yao Gioiello).

A Nightmare Wakes is a lyrical elegy, a beautiful work that holds a flavour of its own, and proves there’s much to sift from the monster that many had consigned to a grave of Hammer Horror offshoots. Right from the opening frame, the picture envelopes a lush, pastoral quality that draws viewers back to an England of agriculture, apathy and acidic penwork. The camera serves as a peephole into the whirlwind where madness, misogyny and macabre come together in a single, solitary moment. 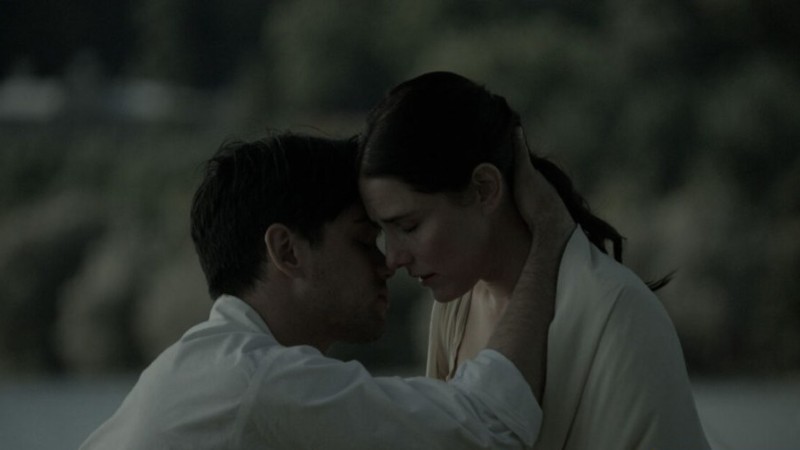 Women, however the precocious their craft, fade into the shadows of their male companions; leviathans lunge from the confine of memory, and into the hallucinatory sequences that mirror Mary on the demons within. There’s a sex scene simply too traumatic to commit to this review. Not all the emotional beats land. There is one too many languishing shots of an artist jilted by their peers. You’d be loath to find a set piece any less piercing than that of the titular woman trapped in her bed, with nothing for company but a bell. Every time she chimes the instrument, the author/lover/mother stands one step closer to losing the very child that has given her some purpose in a landscape that robs every woman of her courtliness.

Caught in a man made art form, Unkel emerges as the film’s most triumphant character – particularly when we realise the importance of metaphor within the story. When the allegories that wrap the texture come to light, Unkel and co. steer the film to an angular, even emotional closing note. The film, uncompromising in its resolve, maps out a legacy even denser than the tale we have so wholesomely put on Frankenstein. Tellingly as ever, behind every great Frankenstein comes the great woman who birthed it!

A Nightmare Wakes is available on Shudder from Thursday, February 4th.