"Greasy movie"
This dystopian British drama has a satisfying amount of violence and carnage, mixed with laughter and emotion, yet ends disappointingly - also available on Skye Cinema and NOW on Thursday, June 24th

Based on Scott K Andrews’s School’s Out book trilogy, this vaguely dirty movie feels eerily prescient. The country is in the grip of a pandemic, and 15-year-old Lee Keegan (Oscar Kennedy), who has been expelled from St. Mark’s School for Boys, is left home alone when his father dies. His mother, who is trapped abroad instructs him to return to school and wait for her there, but he can’t bring himself to tell her that he has been expelled. Returning to the prestigious school in the south of England, he finds only a handful of survivors. When a local parish council set up a militia and declare martial law, outside and inside the school becomes a battleground for the students, their one surviving teacher Mr Bates (Alex Macqueen), and the matron (Jasmine Blackborow).

A school prank has surely never been accompanied by such majestic overtures as George Frideric Handel’s, Zadok the Priest. Performed at the coronations of British monarchs, it’s opening is characterised by an air of dramatic anticipation. So it’s not out-of-place that it accompanies the tomfoolery of a staged locker accident in the first scene of School’s Out Forever, yet in honouring our expectation that a liberal amount of violence and carnage will follow, it’s far removed from the ornate majesty of the piece.

It can feel that reality quickly becomes a stage for genre cinema to thrust its characters upon, but any number of films, including Cillian Murphy’s waking up in 28 Days Later (Danny Boyle, 2002), and walking through an abandoned London have echoed our obsession with viral pandemics and Armageddon. Often, the survivors or those trying to survive have to fight a war on two fronts – against the virus or the walking dead, and one another.

Watching Lee take out the rubbish and hearing the distant voice singing Jerusalem, a truly patriotic English hymn, suggests that Milburn is not without a little scathing wit. Lee’s street with uncollected refuse waste and a society plunging into panic and chaos could be interpreted as a rolling of the eyes at the patriotic spirit. The timing of the film’s release positions it as a response to a country economically and politically fractured, both through Brexit and Coronavirus. Whether it positions the Tory mandate to “Build back better” as a romanticised echo of a new Jerusalem in “Englands green and pleasant Land”, is not important. The inference is enough, and the specific use of the hymn is an echo of tensions surrounding devolution, of Scotland, Ireland and Wales as provinces of majestic old England. 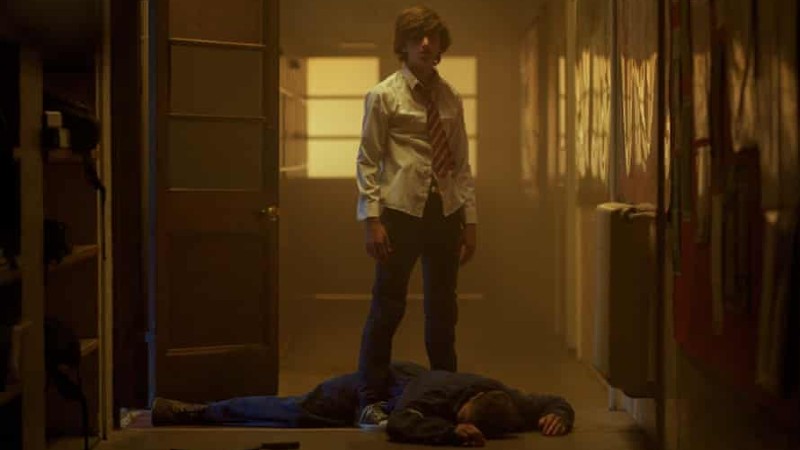 School’s Out Forever is no game-changer, nor does it want to be. Milburn succeeds in finding the emotion and humorous beats of the story that gives it merit beyond the spectacle of violence. While narrative can feel old and less stimulating, emotion or humour are more robust. We laugh, and we feel the anxieties and struggles of the characters, whether it’s Lee’s longing to see his mother, or Pugh’s (Sebastian Croft) unresolved anger towards his father, an MP, and the establishment he represents. The characters draw us into their dystopian reality, and then the film suddenly finds its voice when Claire Baker (Freya Parks), head of parish militia offers a polemic on the savagery laying within us.

Lee’s response feels clunky, yet real. The adrenaline of his stand-off with the militia, his anger and anxieties impair a calm and perfect eloquence. After all, the students, led by Pugh, who make the choice to defend the school are self-described as, “An army bought up on Call of Duty.” A more adolescent version of Sam Peckinpah’s Straw Dogs (1971), lacking the serious and hefty themes of class and masculinity, it still forces us to think about the relationship of civility and violence. It considers how impulsive the latter is and the difficulty of guarding the moral lines to prevent unnecessary and excessive acts of violence, as well as protecting oneself from becoming lost in one’s capacity for violence.

We can hear the film creaking under the weight of the polemic because as welcome as it is, the themes and ideas need to be subtly expressed. They should be left for us to recognise and not preached to us, and Milburn strikes the right tone until the closing scene that feels like a sarcastic punchline. The film however does not have the serious and weighty themes to support it, and this error in judgement, that is not short, ends the film on a lacklustre note.

At its heart, much like Home Alone (Chris Columbus, 1990), it’s an act of placing young people in adult roles. There’s a playfulness to these films that reminds us of the way the young dream of being more grown up, or significant than they are, and we were unlikely no different.

School’s Out Forever is released on Digital on February 15th and on DVD and Blu-ray on April 12th. On Sky Cinema and NOW on Thursday, June 24th.