"Greasy movie"
A critique of China's cultural aping of the American way of life, Cathy Yan's debut feature satirises commercialism and the Westernised idea of a successful life - on Mubi on Friday, February 12th

Adopting a multi-narrative format, the film is inspired by a real-life incident in which thousands of dead pigs were found in Shanghai’s Huangpu River. This drives the story of one of the five lead protagonists, Old Wang (Haoyu Yang), a farmer in neck-deep debt as all his pigs have mysteriously died and his investments have gone bad.

The common behavioural trait cutting across four of the five characters is that of dissatisfaction with their lives. This is owing to the prevalence of a materialistic culture that pressurises people to strive for a higher social standing and attributes happiness to monetary success. Old Wang’s son Zhen (Mason Lee) is a waiter in a posh restaurant but pretends to his father that he is affluent and has made it ‘big’ in life. He befriends a wealthy girl who realises the shallowness of a superfluous high society lifestyle and longs for genuine human connections.

Then, there is an American architect Sean (David Rsydahl) working with a real-estate giant Golden Happiness, who is trying to put behind his failures in America and wants to become ‘something’ in the foreign land of China. His nationality aids him in gaining respect and acceptance from his Chinese colleagues. He is also recruited by another American, Angie (Zazie Beetz), for sideline work as a model for promo events, pretending to be an American celeb or reality TV star. Yan shows us the absurdity and craze of a developing nation’s fascination and reverence for all things Western. 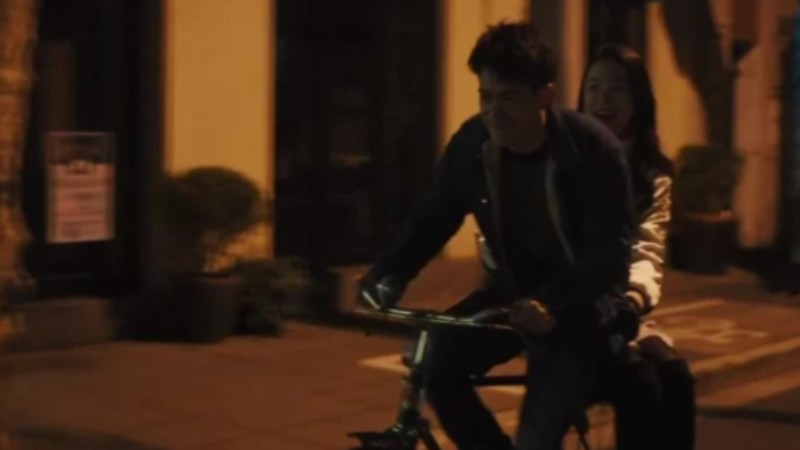 The only character in Dead Pigs who is shown satisfied with her life and without self-worth issues is Old Wang’s sister Candy Wang (Vivian Wu) – a beauty salon owner who lives alone in her parents’ rickety old house which her brother wants to sell off to repay his debt. Candy stands in the way of Golden Happiness that wants to demolish her house to build a Barcelona styled luxurious township to house affluent residents. She can see through the facade of ‘development’ and is the sole house owner in a rubble-strewn waste ground who has refused to vacate her family home. Through her defiance, Yan slaps the consumerist mentality of China’s culture that tries to mimic Western materialistic progress and modernisation.

There is a good mix of drama, comedy and social commentary in Dead Pigs that have been weaved well in its screenplay. The film takes time to build the lives of its characters but picks up pace in its final act. Yan’s deployment of background score is impressive as she heightens the tension and emotions during the crucial scenes. Overall, a promising debut by a talented filmmaker whose next move deserves more eyeballs. Last finished her sophomore feature, a movie entitled Harley Quinn: Birds of Prey.

Dead Pigs is on Mubi on Friday, February 12th.