"Dirty gem"
Set  in the midst of Clinton's America, a same sex couple are introduced to evils even greater than those that target LGBT clubs - out now on VoD

Queried about the picture’s significance, lead actor Jeffrey Bowyer-Chapman explained in an interview: “…I do know that as an actor, having a platform or a place or a genre where I can go, and other people who are like me and like you—queer people, other marginalised individuals – can go and have our stories be the main narrative, where we can be the protagonists, where we can be the heroes, where we can be the ones who are solving the mysteries and saving the day..”

Bowyer-Chapman’s Malik is certainly heroic, thrust into the centre of an ominous village where weird, weary glances are determined to follow him and his partner, Aaron (Ari Cohen). Through his stepdaughter Kayla (Jennifer Laporte), Malik presents a certain normality, the place that he now calls home seems determined to rid him of his sanity and singularity. There, his sexual preferences make way for a more esoteric plain where nuance and nihilism are intertwined in a probing work that aims as much for the heart strings as it does for the head.

Yeah, we’ve seen the story ” a million times before” – family moves into a new town, where welcomes are welcomed by the most ominous of folk – but we’ve never seen it quite like this before! Behind the set pieces that merits this a horror film par excellence, comes a more prescient story of love conquering through a time of great hardship. The story, as much historical fiction as it is horror, puts together a portrait of a decade that made lives difficult for members of the LGBT communities all over the world. 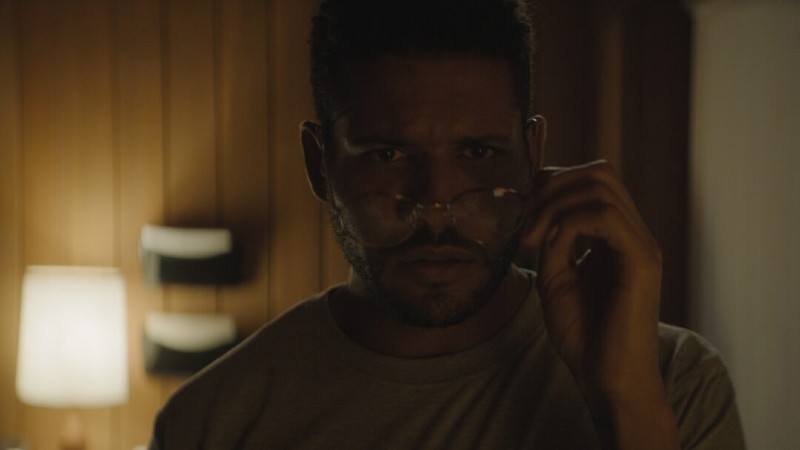 Truthfully, the idiosyncratic elements are there to make the treatise more palatable for cis viewers, because this is unchartered territory for mainstream cinema. Jordan Peele subverted cinema tropes in 2017’s Get Out, eagerly presenting an America shaded by ingrained racism and intolerance. Kurtis David Harder furthers the metaphor by focusing his attentions through the eyes of a gay black man, giving extra clarity to the widened stares that haunt the viewers every where they turn.

Bowyer-Chapman is phenomenal, doubling as the lover and parent he sorely wishes to be. He brings gravitas to a story as striking now as it was 25 years ago, earmarking a comforting figure among the stylistic flourishes that piece this effort to it’s seismic close. The cinematography does lustrous variations on a domicile decorated by fever, fear and flavour, but without Bowyer-Chapman, there simply isn’t a film. He finds welcome honesty in a genre that regularly discards authenticity for something more earnestly shocking – and the film is guilty of some cheap scares, a la the opening sequence set at a lake-but the film works best when it aims for an LGBT audience, rather than pander to the more conventional target of cis horror aficionados. And from that first kiss, to those most intimate embraces every couple shares, the film pays great tribute to those who survived the 1990s as it does applaud the changing times that we are fortunate enough to live in.

Spiral is out now on Amazon Prime.