Judas and the Black Messiah

"Dirty gem"
American biographical drama of African American activist is a rock-solid political crime drama, and it will make you indignant of the actions of the FBI - on VoD on Thursday, March 11th

This is a movie about the life and assassination of Fred Hampton, the chairman of the Chicago chapter of the Black Panther Party (BPP). He was seen as a rising leader within the Black Panthers: a high-profile local leader in a city with a major Black population. Obviously, the FBI wanted to keep tabs on Hampton, so they got a young Black petty criminal and gave him the usual deal: become an informant or go to jail. His name was William O’Neill, played by Lakeith Stanfield, the lead from Sorry To Bother You (Boots Riley, 2018), who also appeared in Get Out (Jodan Peele, 2017), who turns in the best performance in the film. It’s a more complicated role, because O’Neill is somewhat sympathetic to the BP cause, but he’s sold his soul to the FBI—that conflict makes it a much more interesting role. Hampton is played by British actor Daniel Kaluuya the lead from Get Out, and Jessie Plemons (or as Breaking Bad fans refer to him, Meth Damon) plays O’Neill’s FBI handler. Kaluuya has the bigger performance, of course, with Hampton’s speeches to deliver.

It’s a rock-solid political crime drama that is rightly infuriating. Martin Sheen plays Hoover, and turns in a great performance. Some people haven’t liked it, saying there were too many prosthetics used, but Hoover was very ugly indeed, both inside and out, so that was probably necessary. 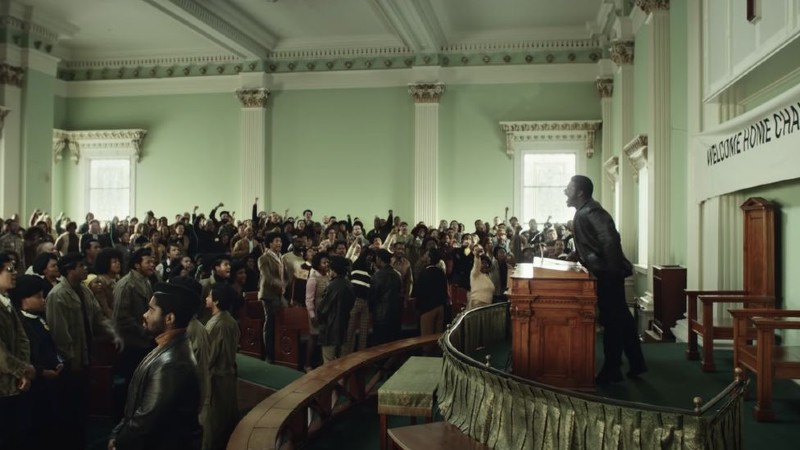 The research, production design and clothes are very well-done: getting that wrong is often the death knell for these types of movies for me. The film vividly depicts the roots of Jesse Jackson’s Rainbow Coalition, an idea that has become a huge political concept over the years up to the present with Bernie Sanders’s project. There’s also a scene that connects it to The Trial of the Chicago Seven, which covered intersections between white and Black radical activities in the late ’60s. It shows how horrendously off the mark the FBI was at the time, as they constantly conflate the Black Panthers with the Klan – there were obviously issues within the Party, including some crimes, but the comparison is ridiculous.

Judas and the Black Messiah is undoubtedly one of the best ‘Oscar-friendly’ movies of the year. It’s a gripping film with two knock-out performances at its centre, so it will be a big awards contender, especially in a year where many competitors have been pushed back. It has a very valid message, and gets into the inner workings of the FBI in that specific time when they were busy bugging, following and entrapping people on the Left. One of the things that makes it really good is that it shows how O’Neill is enmeshed in a messed-up system where he is forced to sell Hampton out. It never makes him out to be a truly evil character, and that avoidance of black-and-white narratives (and having a great actor in the role) makes it much more interesting.

Judas and the Black Messiah premiered at the Sundance Film Festival, when this piece was originally written. On VoD on Thursday, March 11th.