At an unnamed seaside venue, an unusual storm complicates preparations for a wedding. When Anav (Grace Van Patten), a restaurant server, is asked to go down into the basement to flip the switch after the power has short circuited, sparks fly. She wakes up on a rugged coastline where she meets a group of female soldiers, led by Marsha (Mia Goth), who are fighting an endless war against men. Over the radio they pretend to be damsels in distress, luring the sailors to their deaths. As Ana trains to be a sharpshooter, she comes to realise that she’s not the ruthless killer they expect her to be, and in spite of feeling empowered in this alternate world, she knows she must find a way home.

When we daydream, there’s always the separation between the dream and one’s physical reality. Watching Ana’s transportation to an alternate world reminds us of the impossibility to physically enter our dreams. The simple pleasure of this American drama, Mayday, is it offers is that teasing thought of what if we could conquer the impossible? It’s a longing for that, and the warmth of how it feels to lose yourself in your imagination.

Up until this point late in Karen Cinorre’s debut feature, there has been little to hang the film’s identity on. It’s not psychologically incisive or heavy on themes and ideas. Instead, it’s a simple film, bookended by a beginning and an end that structurally recalls The Wizard of Oz (Victor Fleming, 1939). This is no coincidence, because Cinorre has stated that she was dazzled by Fleming’s film.

I’m still not wholly sure of the filmmaker’s intent, whether aspects of the film are accidental, or even is Cinorre being a little crafty? The tone of the film’s opening before Ana’s transportation, especially the bathroom scene where we first see Marsha as the bride, and meet the bathroom attendant, later June (Juliette Lewis), feels off. The female characters are only briefly introduced as minor figures to the men, none more so than the head waiter who is verbally abusive towards Ana, and controlling towards the bride. Alongside the brief closing scene that feels like someone thinking they’ve woken up, is Mayday a dream within a dream? The specifics of the restaurant and its staffing protocols, the extreme response of women at war on the coastline, and the brief ending, could suggest so. In hindsight, we should ask whether we have met the real Ana, or only the dream figure in either her dream or someone else’s? 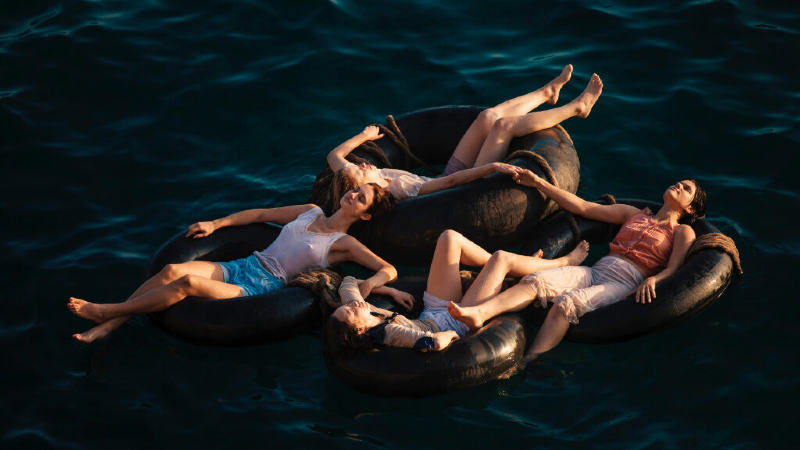 To criticise it’s lack of themes and ideas would be to miss the point. Mayday is a story for the dreamers in us, and especially those with a penchant for creating worlds in their heads, to escape the anxiety of their everyday lives. Simplicity allows the filmmaker to emphasise that teasing thought of what if? The story often seeks to play on our emotions, and it’s not without a mix of joy and sorrow.

In one moment when it’s suggested that Ana’s departure will jeopardise this world’s existence, we’re suddenly confronted with a dilemma. In as much as it’s Ana’s choice whether to sacrifice her desire to leave, we find ourselves interrogating it in such a way that it feels a matter of life and death. It’s a reminder of how a story can become real, the choices of the characters not only their own, but an emotional weight that’s placed upon us.

We accept that our own dreams are false, but Ana’s experience is shared with us and so it’s not her own. A sadness shrouds Mayday that’s similar to The Wizard of Oz. It’s the pain of departures and connections to a reality we have come to believe in, similarly manipulated to good effect by M. Night Shyamalan in The Sixth Sense (1999).

At the heart of the film is a message about empowering oneself. Cinorre’s film has a Jungian dimension, specifically the role dreams play in solving the problems we cannot solve in our waking state. What the director expresses is that it’s not necessarily a clear-cut resolution that is found, more a resolute feeling that empowers Ana. When one of the girls says to her, “You’re going back to so much darkness”, she replies, “In the dark I’ll see the stars.” The story manages to provoke an emotional response, and express an idea about the need to change our thoughts and feelings before we can change our lives.

Mayday had its world premiere at Sundance, and its international premiere at the International Film Festival Rotterdam (IFFR), when this piece was originally written. It shows in October at Raindance in London.

Prisoners of the Ghostland

A criminal is enlisted to rescue the governor's granddaughter from a possibly supernatural place, in crime thriller starring Nicolas Cage and directed by Japanese filmmaker - in cinemas Friday, September 17th [Read More...]

Ever dreamt of erecting your own nation in the Mediterranean? Italian dramedy tells the true story of an extraordinary utopia, but sadly overplays the bizarreness of the tale, diminishing its epic nature - now on Netflix [Read More...]