"Dirty gem"
NQV Media presents five short films from Sweden, Switzerland, the Netherlands, Croatia and Kosovo well worth looking into for their sensitive portrayal of masculine problems round achievement, protection and love - on VoD on Monday, February 8th

The first offering Pojkarna (Isabella Carbonell, from Sweden) follows the induction of Markus, (Sebastian Hiort af Ornäs), a young paedophile entering an institution for sex offenders. The full clinical, efficiency of the Swedish welfare state is on display here, with a chillingly effective scene in which Markus describes his offence to a judge. His young life is totally ruined. He is the modern equivalent of a witch. This is compassionate film making at its best by its Director Isabella Carbonell and has already won an award at the AFI Film Fest in Los Angeles.

The second short film Ioana (Simon Pfister, Switzerland) is also a compassionate portrayal of male powerlessness, trying to offer protection and love. Adrian (Max Krause) is a young Romanian migrant hustling on the streets, desperately trying to drum up enough cash to get his sister Ioana to Switzerland. He is handsome but not gay and he loathes the life of exploitation he must lead where he is merely a commodity. A client tries to anally rape him by refusing to use a condom, which Adrian always insists on. In desperation he picks up a vase and smashes it across the client’s head. Adrian is left desperately surveying the rooftops of Zurich, knowing his much-loved sister, who has been sacked from her job for refusing the sexual advances of her boss, can’t come to Switzerland, he might have contracted HIV and that the police may eventually be coming to get him.

The third film is called Tomer and Elias (Cleo Julia Mullis, Netherlands). It is miles away from the previous scenarios, and jars somewhat with the tone of the other films. We are in the very tolerant world of the Netherlands. The mother of two young brothers Sven (Mingus Claessen) and Alex (Noah de Kruijf) notice that they have new neighbours – a single mother and two young boys, one white and the other, intriguingly, of mixed race. The mother introduces her two sons – Tomer and Elias – they are, indeed, brothers but their fathers are different because their mother has got rid of them after they have fathered their children. She doesn’t really like living with men, but she is happy to have children. This alarms Alex. If the fathers of Tomer and Elias are got rid of by their mother, it means one thing – the mother is not having sex with the fathers. His Mummy and Daddy are having sex because they are staying together, and he does not want to be separated from Sven. His intriguing and very innocent way of solving the problem of sex and staying together must be seen to be believed. This rather charming Dutch fairy tale is a satire on the extremes of the feminism and mocks the concept of the disposability of men. 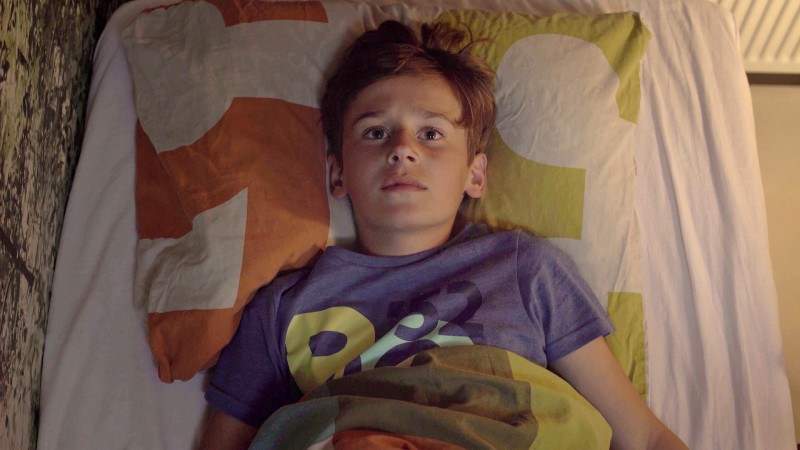 Picnic (Jure Pavlovic, Croatia) involves young Emir who is on a day trip to his father in a penitentiary. Emir is a sensitive boy, and he wants to love his father, but his father is a crude, rough type who wants his son to be “manly”. His father bores him with stories of the war in former Yugoslavia and then wants a bout of fisticuffs. Emir delivers a sharp blow, which cuts his father, but his father is delighted. Then the meeting has got to end, and Emir is taken away, tearful and confused. This is, indeed, the titular “Desire in the Dark”, which men and boys are often not allowed to express the fullness of their feelings.

Boys Feels: Desire in the Dark is out on Amazon Prime and Vimeo on Monday, February 8th.

I am what the Germans call an “Augenmensch” (an eye person). I love s...