Prisoners of the Ghostland

"Dirty gem"
A criminal is enlisted to rescue the governor's granddaughter from a possibly supernatural place, in crime thriller starring Nicolas Cage and directed by Japanese filmmaker - in cinemas Friday, September 17th

This was one of the most hotly anticipated movies at the Sundance Film Festival this year. It marks the English-language debut of maverick and extremely prolific Japanese filmmaker Sion Sono, director of Suicide Club (2001) and Love Exposure (2008). The film continues the long and strange career of Nicolas Cage, who is on record as claiming this is the craziest film he’s ever done – which is saying something!

As much as the film has anything resembling a coherent plot, Cage plays a criminal (known only as The Hero) who is enlisted in an Escape From New York scenario by the Governor (Bill Moseley) to rescue his granddaughter from a place known as The Ghostland. As the place’s name indicates, it may be slightly supernatural. The Hero has to wear a leather jumpsuit during the effort that connects bombs to different parts of his body, including his arms, neck, legs and, erm, crotch. If he is violent towards any women, bombs will explode… He has five days to find the girl, during which he’s up against The Ghostland and everyone in it.

The film is an odd mixture of Mad Max (George Miller, 1979) and Escape From New York (John Carpenter, 1981), with The Ghostland being a sort of Gilliamesque junkyard. Sono is one of the craziest directors in Japan, and he brings to it some elements of Samurai films or Westerns to come up with an incredibly unique result. It is pure unadulterated Nic Cage insanity, although I don’t think it ever quite reaches the glories of Mandy (Panos Cosmatos, 2018). Moseley has a great time in his villainous role here, which is a better part than what he normally gets. It doesn’t make a huge amount of logical sense, but Sono definitely makes wildly inventive movies. 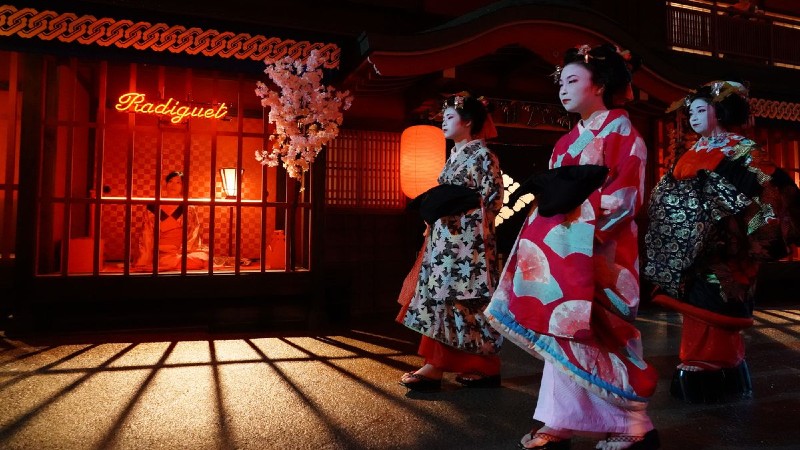 Cage is someone who makes a lot films these days: nearly 30 in the last five years alonr. The moment people will remember is probably the way he says “testicles” and “I’ll karate chop you!”, which will join the list of great Nic Cage line readings. The film goes on some strange tangents, with unconnected scenes and flashbacks. There are plenty of little sub-plots (Sono’s known for doing this) maybe he should’ve just stuck to a simple John Carpenter-type plot.

If you liked Mandy and Colour Out of Space (Richard Stanley, 2020), you’ll want to pump this into your veins immediately. It’s completely surreal madness from two of the most eccentric people in filmmaking today, delivering an overwhelming experience. It won’t be for everyone: unlike Mandy, which is a strange movie but has a fairly straight-ahead revenge plot, the story here is much more convoluted and some may find that irritating after a while. If you get on board with it early on, you will have a lot of fun. The film has an impressive set design as well. Hopefully fans of the film will check out some of Sono’s other work as well. This is the first of his films where Sono has not written the script, and maybe it would have been even better if he had done so.

Prisoners of the Ghostland premiered at Sundance, when this piece was originally written. In cinemas on Friday, September 17th.