The Queen of Black Magic

"Mostly clean movie"
Indonesian horror haunted by mistakes of rhythm and tone becomes all bark and no bite - exclusively on Shudder now.

In Kimo Stamboel’s reimagining of the 1981 Indonesian horror classic of the same name, Hanif (Ario Bayu) returns with his family to the rural Indonesian orphanage where he was raised. He’s joined by his best friends who have returned to pay their respects to the gravely ill director. Their homecoming turns into a nightmarish ordeal when they’re terrorised by someone using black magic to avenge past evil deeds. The men will learn the truth of the events that they played their part in years before, but will they or their family leave alive?

The Queen of Black Magic is a frustrating and drawn out experience that struggles to impress itself upon us. By exceeding the 90 minute mark, the filmmakers fail to appreciate brevity, especially as it’s a lean film without an emphasis on ideas and themes. It’s the type of horror that relies on suspense and a delight of gruesome set-pieces, yet unfortunately, it struggles to satisfy on this rudimentary level.

Stamboel and screenwriter Joko Anwar struggle to show an understanding of rhythm and tone, of building to a crescendo, and even before its end, it has let us off the hook. 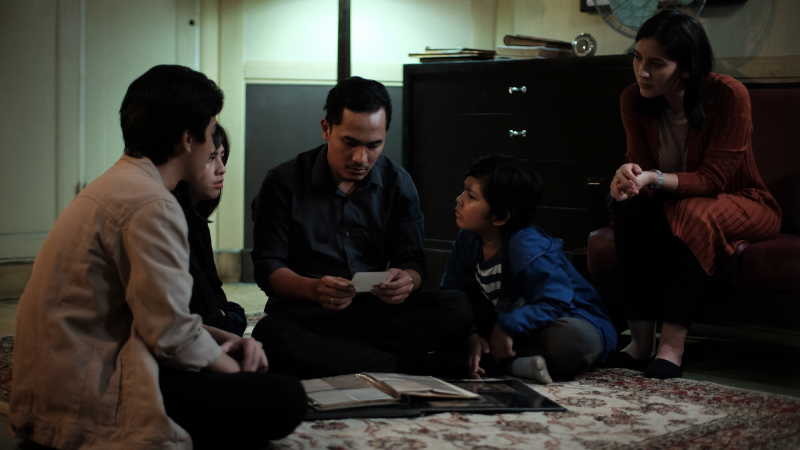 Stoking this frustration is how we’re ready for it to become a horror film long before it does. The competing tones of the drama, the suspense, and the supernatural horror are a hindrance. Early on the film shows signs of promise, when the camera doesn’t immediately cut away from an empty hallway once the characters are out of frame. Holding on the space provokes an uneasy feeling of a presence that we can’t see, but is either there or is near by. There are other moments early on that tease, but the mishandling of rhythm and tone thwarts the suspense paving the way for the visceral horror that is to come.

At around or just past the halfway mark, there are a couple of terrifying sequences, after which it’s a decline that feels like an exercise of smoke and mirrors – the horror is all bark and no bite. Also troubling is rather than the normalcy of the drama being interrupted or intruded on gradually by the suspense, the shadows are not closing in on the characters, the suspense is being overwhelmed by the drama itself. Add to that a clichéd twist that injects a little energy into the film, or hope that it’s a turning point, but The Queen of Black Magic is haunted by mistakes of rhythm and tone that it cannot escape.

The Queen of Black Magic is streaming exclusively on Shudder now.

Two couples on holiday suspect that there's something sinister with their rental house, in this welcome addition to the "secluded vacation spot" subgenre - American horror is available now on Amazon Prime [Read More...]

Documentary sheds on the life of the flamboyant and openly gay American writer, with a focus on his unfinished novel Answered Prayers - on VoD on Friday, January 29th [Read More...]

A Jew pretends to be Persian in order to avoid death in a concentration camp, only to be forced to teach the language over which he has no command - on Amazon Prime on Sunday, April 18th (and also on other platforms) [Read More...]