"Greasy movie"
Two couples on holiday suspect that there's something sinister with their rental house, in this welcome addition to the "secluded vacation spot" subgenre - American horror is available now on Amazon Prime

The debut directorial effort from Dave Franco comes at a time when the idea of a group of friends or family members gathering in remote locations for a quick break from the drudgery of everyday life has become popular once again.

In the current world of lockdowns and stay at home orders, the thought of a relaxing getaway is the one thing that many of us are dearly holding onto when this awful pandemic passes. Some obvious examples of this recent trend are Jordan Peele’s Get Out (2017), David Koepp’s You Should Have Left (2020) Darren Lynn Bousman’s The Death of Me (2020), Jeff Wadlow’s Fantasy Island (2020), and most obviously Veronika Franz and Severin Fiala’s The Lodge (2019) and Madeleine Sims-Fewer and Dusty Mancinelli’s Violation (2020). These films take their characters out of their usual life settings and routines and place them in the confines of shared reclusiveness, all in the name of a relaxing vacation time together. Rarely does this notion go well. Paranoia, suspicion, torture, violence and murder are the usual outcomes as the protagonists fight to escape and return to normality.

This is certainly the case with The Rental. A foursome of elder millennials attempts a relaxing getaway to a luxury seaside house, only to realize they can’t escape themselves and each other. Charlie (Dan Stevens), his partner Michelle (Alison Brie), Charlie’s brother Josh (Jeremy Allen White) and his girlfriend Mina (Sheila Vand), who also happens to be Charlie’s business partner, rent a secluded seaside villa for a weekend away from their busy urban lives. The relationship between Charlie and Josh is strained and competitive and isn’t helped by the notions of jealousy and inadequacy felt by Josh towards Charlie and Mina and the time the two spend together as work colleagues.

When they arrive at the rental property they are greeted by Taylor, the co-owner and caretaker of the property. Taylor makes a few off the cuff racist remarks to Mina (“So, how’d you end up with this family?”) and he is questioned about why the rental application was turned down when Mina attempted to rent the property but was accepted when Charlie placed the application. Taylor feigns ignorance, but we are made aware that Taylor is an untrustworthy creep. A hidden and coded door under the property sparks some suspicion that something isn’t quite right.

When the first night comes along, Mina, Josh, and Charlie take some MDMA, whilst Michelle, wishing to be fresh for an early morning hike in the surrounding woods, hits the sack. Josh eventually bails out and crashes on the couch leaving a very intoxicated Mina and Charlie to share a hot tub session together. The friendly flirtation between Mina and Charlie spills over and the two share a passionate kiss before moving inside and having sex in the shower whilst Michelle and Josh are still passed out.

The next morning Charlie and Mina stay home and nurse their hangovers whilst Josh and Michelle take a hike through the woods. They both agree that their infidelity can never happen again. Whilst taking a shower later in the day, Mina notices a small camera has been hidden in the showerhead. She shows Charlie and they panic thinking that their sordid shower session has possibly been recorded. They both instantly jump to the assumption that Taylor is the Peeping Tom who has planted the camera.

Whilst out on the hike, Josh lets slip to Michelle that Charlie has a past of hooking up with girls whilst still in relationships. Whilst knowing that her own courtship with Charlie began when he was still seeing someone else, it shocks her nonetheless, and when they get back from the hike, Michelle confronts Charlie about his past behavior. Whilst appearing content in their marriage, there appears to be some conflicts in Charlie and Michelle’s relationship which will come to the forefront as the vacation continues. As the final night approaches, Michelle decides it is her turn to loosen up and she takes a dose of MDMA, whilst the others relax. Charlie and Mina, on the other hand, are desperate for the vacation to be over. Michelle soon discovers that the hot tub is broken, so places a call for Taylor to come out and fix it.

Both Charlie and Mina are uneasy with Michelle’s action. Taylor arrives at the property a little tipsy himself and proceeds to fix the hot tub. Just as he’s leaving, Mina confronts him and asks him to take a look at the shower head with the hidden camera. When Taylor denies any knowledge, Mina again confronts him and Taylor offers to call the police to settle the matter once and for all. Knowing that police involvement may also mean the footage of her and Charlie will be exposed, she tries to grab his phone from him. The scuffle is seen by Josh as an attack on Mina, so he rushes to her aid and viciously punches Taylor out. With the foursome quarreling outside in the dark, a man, unseen until now, and dressed all in black, suddenly appears in the bathroom where Taylor is laid out unconscious. He puts his hand over Taylor’s mouth and suffocates him. 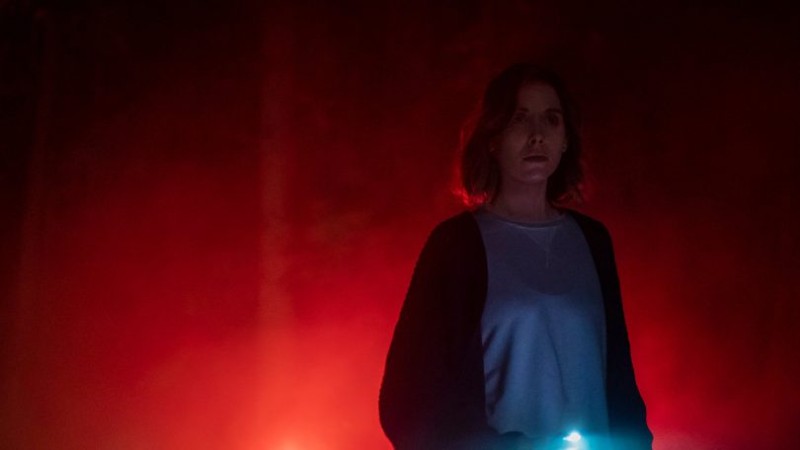 When the squad returns and finds Taylor dead, a realisation hits. Michelle wants to call the police, but Charlie insists on protecting his brother, whilst Mina agrees. They plot to throw Taylor’s body off the cliff edge and make it look like an accident. Michelle can barely believe the coldness of Charlie’s proposal. The three accomplices heave Taylor’s body to the edge and toss him over the cliff. His body snags on a rock and Josh climbs down to kick him off into the raging waters.

Whilst the body disposable is occurring, Michelle packs her bags in anticipation of leaving. The shower in the other room mysteriously turns on by itself and she moves through the house only to find a television playing the footage of Charlie and Mina’s tryst. After a confrontation with Charlie, she leaves immediately and drives away only to get a blown tire a short way down the road. Michelle texts Charlie for help, but as her text is sent, the masked man runs out of the dark forest and kills her. Charlie travels down the road to help Michelle, but finds her lying dead. He is then attacked and killed by the masked man.

Back in the house, Josh and Mina go hunting for the recording equipment that has captured Josh’s attack on Taylor. Josh receives a text message from Charlie in which a video of him and Mina discuss their night of passion. Josh rages through the house looking to confront Charlie, only to be sliced by the masked man. Mina runs out into the woods with the man in hot pursuit. In the deep fog, she tumbles over the cliff edge and is presumed dead. The masked man returns to the house and removes all the surveillance equipment. It appears the cameras were not only placed in the showers, but all over the house. The man packs up and leaves. Although he removes his mask, we are never shown his face. Later on, he enters another short-term rental property and is shown around by the owner. He installs his equipment once again, cuts a key, and as the credits roll we see groups of renters going about their business. A clip of a sleeping couple cuts just as the man charges into the room with a weapon.

The Rental is an interesting and absorbing film, and a neat addition to the current trend of films that play on the fear of inhabiting an unknown and secluded vacation spot. But the film is only a success to a certain point. It’s turn towards classic horror tropes, with the inclusion of an unnamed, and unknown masked man slaughtering the heroes in the final quarter of the film actually softens the impact. The true intrigue of The Rental lies in the disintegration of the relationships between our four protagonists. The surveillance element sets the action in motion, but in all honesty it would have been far more powerful to have had an unknown antagonist to add an element of paranoia about who or what is watching them and why.

The inclusion of the unknown man seems tacked on. It’s as if Franco couldn’t quite find the ending he desired, so pulled Michael Myers from Halloween or Jason Voorhees from Friday the 13th and placed them in this new context. With his strange mask and boiler suit-type clothing he resembles Myers. But the motives of the man go unexplored and really make no sense at all. Is he a voyeuristic killer who only murders those that break the house rules? (Josh brings his cute dog along when the ad clearly states no pets allowed. Thankfully, the little pup survives). Does he only kill those that cheat on their partners? Why the surveillance? Surely this is incriminating if he’s ever caught.

Franco has hinted that The Rental could see a sequel in the near future and a further exploration of the ‘Airbnb Killer’ could reveal some real disturbances in the character’s arc. If that’s the case, then The Rental could be an interesting starting point for a whole new saga. A film like The Rental, which involves a small cast and crew, is an easy option for filmmakers wanting to create a project during Covid restrictions. As it stands, the film offers depth in characterization from its excellent cast, unnerving suspense within the narrative, stunning location and cinematography work, and an effective directorial presence from Franco. My only wish is that instead of turning to slash and cut horror, the film had stuck it out and opted for the psychological traumas. Sometimes there is no better horror than the psychological torment we inflict upon ourselves and those around you. Sometimes the unknown is better than what we are shown. Sometimes the real villain is us.

The Rental is out now on Amazon Prime.