"Dirty gem"
British documentarist invites strangers into his house and captures the ensuing moments of both awkwardness and solidarity - in cinemas on Friday, June 25th

Marketed as “a meditation on, and a rebellion against, the act of filmmaking itself”, this clever little documentary is indeed very unorthodox. British filmmaker Marc Isaacs shoots a homeless person, his cleaner, his neighbour and a builder interact with each inside his very own house. The outcome is peculiar and engrossing.

At first, unease prevails. It’s as if the filmmaker was constantly asking: “does a camera offer healing or does it inflame the subjects?”. The builder – who has been commissioned to fix Marc’s fence – gives the helmer a dirty look when asked to “just carry on as usual” despite the pervasive and invasive device capturing his every move. He also expresses his indignation as his client haggles down the service price of just £600. The homeless man from Slovenia (Michel) is hardly used to house etiquette, promptly spreading his grubby body and clothes across the sofa in the lounge. His hair and beard are overgrown, his nails rotting, his face red and swollen as if punished by bad weather and hardship. The cleaner Maria carries on with her work duties undaunted by the presence of the unusual crowd. She share images and thoughts about her later mother. She wants to throw away some VHS tapes. Is that a riff on ephemerality of film?. The chador-clad Muslim-neighbour is fairly gregarious, too. Perhaps because it’s Ramadan and she wishes to share food and joy with others.

Gradually, these people shed their reservations and talk openly about various fiery topics. The Muslim neighbour successfully challenges Michel’s prejudices views of Muslim women. He thinks that they are stingy because they never spare any money. The neighbour explains that they are probably uncomfortable because he’s a man, and that Muslims give 20% of their wages to charity. She also challenges the view that Jews are enemies (the filmmaker himself being Jewish). There are little moments of integration, kindness and solidarity. There’s also a cat called Leno. Siginifcantly, the feline brings his prey (a dead pigeon) into the house just as the neighbour brings the Eid food which she cooked herself. Both the human and the animal are generous and willing to share their meal. Unsurprisingly, the guests prefer the human food and simply bin the dead bird. 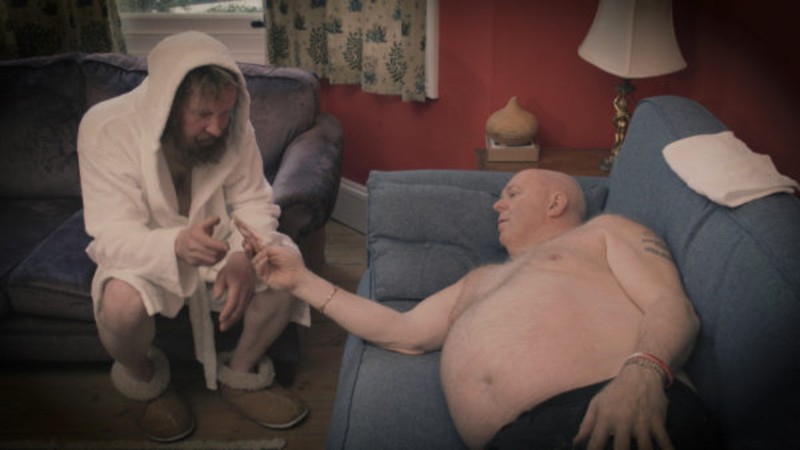 This is as close as you will get to a “homegrown” movie. There is no artificial lighting, no make-up, no lapel mics and no music score (except for the last sequence). I would hazard a guess that the budget was close to zero.

During a video call, Marc’s producer encourages him to start his own movie: “just film it, just do it”. It may sound like a simple command, but it isn’t as straightforward as it seems (in my personal case, it took me 40 years to switch a camera on). Most filmmakers require a script, a narrative and an impetus, but this British director seems ready abdicate of all of these elements. He allows the story to develop organically as these people become acquainted and share intimate details of their lives with each other. Well, at least partly. In reality, The Filmmaker’s House blends reality and fiction. Some of the interactions were staged, and you can almost tell it. They feel a little contrived. One such example is a scene in which the builder – who’s allegedly experiencing heart pain – gives the homeless man some money. The chemistry between the two isn’t entirely credible. Perhaps this contrition isn’t an issue at all. Has Marc set out to denounce the manipulative nature of documentary?

Interestingly, the director opts to stay behind the camera during the entire 76 minutes of this documentary. I believe that his face is never revealed, not even in the mirror (unless I missed a fleeting moment). Yet this is not the fly-on-the-wall type of documentary. Marc is constantly instigating and prompting his subjects. He allows his most intimate space to be occupied by very rich and flamboyant characters, a very brave feat. One thing is certain: his home will never be the same again after this movie.

The Filmmaker’s House is in cinemas on Friday, June 25th.