"Greasy movie"
Four women work together in an NGO, in this Danish psychological thriller and interesting study of workplace bullying - on VoD on Friday, January 22nd

Beyond materially productive tasks and the mundane triple-reviewing of reports, the interpersonal machinations of workplaces are fascinating. Day after day, the world over, disparate personalities from sometimes incompatible backgrounds funnel themselves into enclosed spaces in forced cooperation towards a common goal (pandemic lockdowns notwithstanding). Generally, differences are set aside, papers are filed and everyone goes home with their wages intact. Dig a little deeper into any given office, however, and before too long a reality of grudges, alliances and ad hoc power structures emerge, unmappable by even the most overthought company organogram.

Workplaces are ubiquitous but those films that are set in offices stick to these spaces for functional, narrative purposes, without examining the richness of day-to-day dynamics. It is here that The Exception breaks its most interesting ground. Four women of ill-defined journalist/archivist/secretary roles are forced together by their jobs at an NGO, investigating war criminals and historical genocides. You might think that such a lofty, ‘pure’ pursuit would attract only the most selfless of workers, immune to lowbrow office space dynamics. This assumption is quickly proven false as newcomer Anne-Lise (Sidse Babett Knudsen) is subjected to a hostile work environment; a spectrum of aggression, ranging from passive to pointed.

Beset by early-onset arthritis and fearing an impending promotion-demotion pendulum swing, Malene (Amanda Collin) acts the ringleader, leading the emotional abuse and dragging Iben (Danica Curcic) and Camilla (Lene Maria Christensen) in her wake. Iben has a reputation that precedes her in their highly specific social circles and is monikered the ‘hero of Nairobi’, having escaped kidnapping and torture on the Kenyan plains not long before the events of the film. 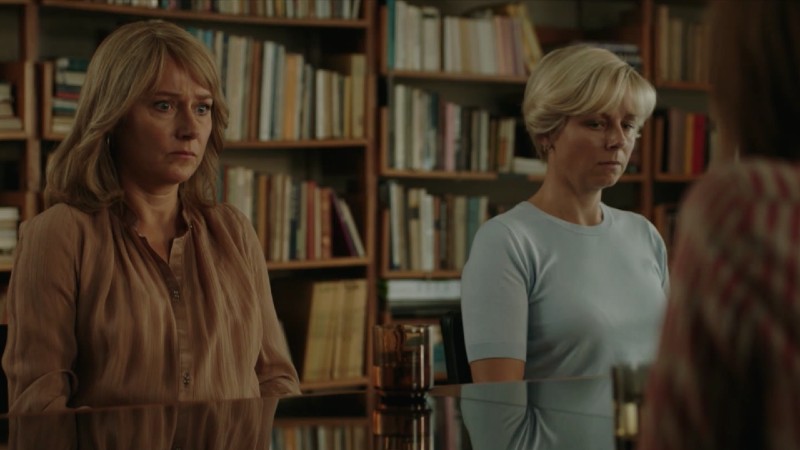 Camilla is ostensibly the most normal but something doesn’t sit quite right with her, either. All four women are thus possessed of very different baggage and, as with similarly Danish knockout Another Round (Thomas Vinterberg, 2020), the film does well to characterise its leads with strong performances all around. The manner in which their waking traumas and desires are portrayed helps to layer the tension early and consistently. Motives are somewhat understandable, if not condonable.

With bitchiness set to 11 and a marked absence of anything resembling a HR department, the stage is set for paranoid persecution. The catalyst comes with threatening emails sent to all but Anne-Lise, possibly alluding to their coverage of a serial Serbian offender. Owing to the ongoing issues at work, the women cast suspicion on one another and events quickly snowball, with the cod psychology of repressed memories and breaking points adeptly used to suggest any one of the leads as culpable. This downward spiral of suspicion is punctuated with sequences of historical war crime stills and ruminations on the nature of man, authority, conformity and inner evil. It is a chillingly effective comparison; contrasting the Nuremberg defence of atrocity perpetrators with everyday, milquetoast social transactions that mount and mount to the point of very real, personal tragedy for those at the bottom of the office pecking order.

Unfortunately, perhaps inevitably, the ramping of tension is swiftly undercut by final act revelations. It is hard not to feel disappointed at the end, when the murky tangle of motives and resentment resolves into focus. Moreover, a run-on sentence of an ending feels simultaneously rushed and overlong, with each reveal stemming two more branches of resolution. As an adaptation of a much garlanded, internationally bestselling novel, it is difficult to discern how much of this is a general fumbling of the ball by director Jesper W. Nielsen or a function of trying to remain true to similarly padded source material. Tweaked pacing could have led to a more satisfying finale. Nonetheless, there are enough interesting takes to recommend The Exception as a portrait of a lady being gaslit and a modern installment to the psychological thriller genre, seemingly underserved in recent years.

The Exception is out on Digital on Friday, January 22nd.

A husband and father reveals that he’s transgender, ripping apart his family’s concept of normality - in cinemas from Friday, October 2nd. [Read More...]

Erna at War (Erna i Krig)