"Greasy movie"
Survivalist horror becomes a metaphor of both man’s conflict with nature, and present-day America - exclusively on Shudder on Thursday, January 14th

A flirtatious encounter turns into a life-or-death struggle for Eve (Lucie Debay), when she meets a charming stranger (Arieh Worthalter) in a nightclub. She’s away from home supervising a construction project, and dodging the calls of her boyfriend or husband, she leaves the hotel and heads to a local club. She hits it off with the stranger and winds up in the back seat of his car, only for them to be disturbed by a second man. Unsettled, Eve escapes and flees into the forest, but her ordeal is far from over. Pushed to the extremes of survival by the two men in pursuit, awakens a vengeful desire.

With its clichéd heart of a woman victimised by men, tradition dies hard in French director Vincent Paronnaud’s English language horror, set in a nondescript place. While Covid-19 may be depriving us of normalcy in our everyday lives, it assures us normality can still be found in genre cinema.

Watching Hunted, I found myself provoked by the quizzical feeling of why we choose to watch these types of films, and why do storytellers continue to tell these stories? These plots are a well trodden path of violence, that can seem to have little to offer us beyond their adrenaline fuelled survivalism.

A relentless and intense nightmare, we watch Eve flee, trying to evade her pursuers. She’s caught, only to escape again, until the final showdown ends somewhat predictably. It may be that we’re supposed to see these stories as empowerment forged through violence, a defence against the recriminations of misogyny that genre cinema is vulnerable to.

Hunted is not supposed to be a comfortable experience, and it’s not solely about physical violence. Eve’s torment is treated like a twisted sexual act – the verbal abuse is the foreplay to the violent consummation. Without doubt, this is an abrasive movie: its maker doe not fear repelling and unsettling people.

As civilised as we are, there’s a primitive side to us. Therapy offers a client/patient a safe space to confront their thoughts and feelings. Cinema offers us something similar to connect with our shadow complex and our primitive instincts – the survival and the predatory. 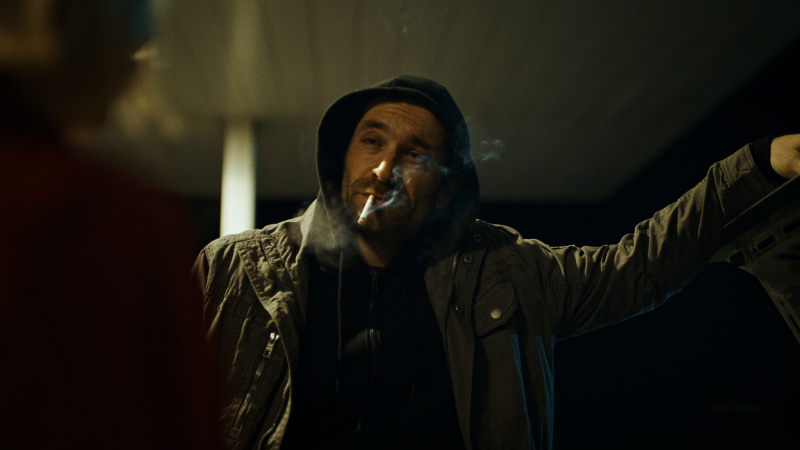 Characters like Eve allow us to experience the former, while Worthalter’s charming but sadistic killer, similar to the likes of Heath Ledger’s Joker in The Dark Knight (Nolan, 2008), should allow us to empower the darker aspects of our personality, but in a safe way.

The skill of these films is to find a means to make cruelty fun, often through the antagonist who finds the separation between our moral and shadow complexes, then whether consciously or subconsciously, they rip it open. Worthalter’s character is laced with black humour, that opposite Eve’s vulnerability and lack of confidence early on, seduces us. It’s not to say we like or sympathise with him, but there’s a part of us tickled by his cruelty. Unlike Gotham’s homicidal clown, who compels the conflicted choice of who we would aspire to be: the hero who defends society, or the villain that seeks to burn it down, the antagonist in Hunted is superficially amusing.

One of the interesting ideas Paronnaud plays with is nature as a moral arbitrator, that protects the woman in plight. Hunted can be positioned as a metaphorical film, with Eve representing mother nature, who is victim to man’s violence, and the wolves and the dogs are nature fighting back. If the red coat and the wolves are supposed to infer this is a reimagining of Little Red Riding Hood, then it’s not. There’s an awareness of the fairy tale and references, but there is no act of reimagining.

At the same time, it seems unlikely that there would be a political agenda for the director, but Hunted responds to present-day US in an unexpected way. Eve can be seen as personifying democracy. She plays with fire by allowing herself this sexual dalliance, and burning herself she’s forced into a struggle to reassert control. It echoes the American political system that frustrated with the establishment, chose the untraditional Trump. Now having burnt themselves, they’re in a struggle to reassert control, and protect their constitution and democratic values.

I often wonder whether there’s a point where survival films such as this need us to enter an emotional and psychological space, that with continued exposure becomes increasingly difficult? The insurmountable struggle for Paronnaud is that neither his protagonist or antagonist are memorable characters, fating his film to be forgotten with the passage of time. Already likely to be a divisive film, Hunted is certainly not for everyone. Genre fans may even respond with lacklustre enthusiasm, tired of the overexposure to the familiar, but for some, they’ll be moths drawn to the flame.

Lushly textured, sensitive portrayal of a Georgian woman in crisis of faith and family snatches nearly every major prize in San Sebastian, and it's one of the dirtiest movies of the year - on VoD on Friday, January 29th [Read More...]

Documentarist investigates the ideology of notorious deafblind activist, which the American establishment tried to sweep under the carpet for years - watch it now for free [Read More...]

The closing night of a Las Vegas dive bar offers a glimpse into the American soul, in this captivating blend of documentary and fiction - now on all major VoD platforms [Read More...]