"Dirty gem"
Lushly textured, sensitive portrayal of a Georgian woman in crisis of faith and family snatches nearly every major prize in San Sebastian, and it's one of the dirtiest movies of the year - on VoD on Friday, January 29th

In a sparse, remote valley embraced by Georgian mountains, Yana (Ia Sukhitashvili) prepares an isolated meeting hall for its weekly Jehovah’s Witness service. She sets up the projector and seating arrangements as the congregation dribbles in. High-spirited children are corralled and whilst husband and minister David (Rati Oneli) welcomes his flock. They settle in for a morning of scripture in a sleepy Sunday of a scene and I defy you not to lose focus, yawn or check your watch.

Suddenly, explosively, the calm is ruptured and the ongoing plight of the peaceable sect is thrown into sharp relief. Georgia is a country where four out of five civilians subscribe to the teachings of the Christian Orthodox Church. Think Roman Catholicism but somehow more oppressive. As a minority faith in this fervent society, it is made clear that the Jehovah’s Witnesses have been facing persecution for some time, with no recourse from the institutionally bigoted authorities. Beginning explores this alienation through the lens of Yana, in her unenviable position of minister’s wife – clear prey for the dogmatic Orthodox wolves.

Not that this alienation is exactly spelled out, mind. Aside from select moments of out and out savagery, the machinations of the plot are subtle and, at times, obtuse. The story is told as much by the weary bearing of Yana and her rote compliance with her Jehovah’s Witness duties than any straightforward, expository dialogue. As such, Beginning can be a challenging watch; perhaps frustrating, depending on your mood. That said, it’s an impeccable performance, stoic and impotent all at once. 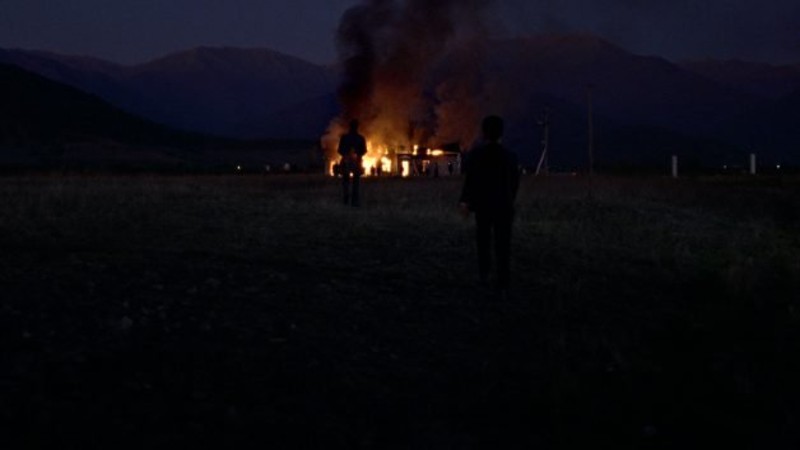 Sukhitashvili bagged the Best Actress award for it at September’s San Sebastián International Film Festival, from a jury including Luca Guadagnino of Call Me By Your Name (2017) fame and Michel Franco, director of New Order (2020). Beginning also rightly won Best Film and Best Screenplay, with Dea Kulumbegashvili walking away from the event with the garland of Best Director.

Accordingly, there is much to admire here. Beginning constantly wrongfoots its audience, teetering from sweet, sedate moments to triggering violence, from uneasy tension to contemplative landscape shots. At times the storytelling feels as alien and dreamlike as the flowing Georgian script that crops up, looking for all the world like some half-remembered offspring of Hebrew. Camera choices are also brave – where there is dialogue, the active speakers are usually offscreen, out of frame. An endearing sequence of straight-to-camera interviews with children as they explain their understanding of Heaven and Hell brings some much-needed levity to the piece.

To match this preponderance on cinematic textures, there is, too, an abundance of themes to unpick, should one go looking. Innocence and sin, persecution and sacrifice. Womanhood and agency in the institutions of religion, marriage and society. Biblical, Abrahamic stuff. All work in service to an ambiguous climax, tending full on, Darren Araronofsky’s mother! (2017) levels of allegorical. It’s as likely to rile as much as entrance but I was fully there for it. My one personal bugbear is that Nicolas Jaar, soundtrack to many a late night afterparty, is highly billed as providing the music for the film. However, don’t come expecting a moody house-inflected soundscape, as the film is mostly unscored other than a bizarrely out-of-place end credits track. Not that Beginning needs any extra layers to its dense, thoughtful offering. Go and watch with an open mind and observant eye.