"Greasy movie"
The closing night of a Las Vegas dive bar offers a glimpse into the American soul, in this captivating blend of documentary and fiction - now on all major VoD platforms

In this captivating American blend of documentary and fiction, it’s the last call for Las Vegas dive bar, the Roaring 20s. Across the course of the final evening, and on into the very early hours, barflies gather to say goodbye to their drinking hole. The conversations are friendly and humorous, with some contentious disagreements, offering a glimpse into the American soul.

Bill and Turner Ross blur the line between the two forms, playing on the reality that life is a story seen from differing perspectives. We differentiate the two with such ease, yet in an age of “fake news” and manipulating the facts, what is the truth? Under Donald Trump’s presidency it has become an increasingly flexible narrative, with no onus on integrity. His name and the question whether he can be trusted is asked here, although for the audience, it’s a question that has been answered.

The interesting observation of truth in Bloody Nose, Empty Pockets, emerges out of the generational conflict. Michael (Michael Martin), one of the older patrons who has made the bar literally his home, sleeping on the sofa and shaving in the restroom, shows a willingness to own up to his generations failings. This is opposite the anger and frustration of a younger man who tells him, “The number one reason I’m mad at you is because you’re old guy, and your generation destroyed my country.” Michael replies, “Now you can blame me generationally as much as you want, and it’s appropriate to do so because my generation fucked up.”

But did his generation mess up, or are the imperfections of society a consequence that each generation is a work in progress? Whatever the answer, what’s clear is anger and frustration not directed appropriately or constructively, will see the younger generation become the ones that people are in time mad at. 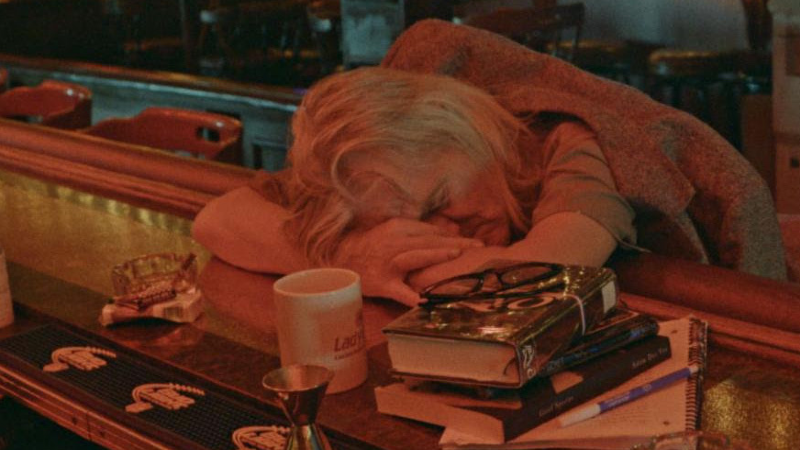 Bloody Nose, Empty Pockets is a celebration of conversation. We listen in as lives being revealed, the hopes and regret, the wisdom shared that touches upon themes of parental concern about wayward kids, feelings of being displaced, used and devalued, and not empowered by government and society, including some who served their country. There’s an amusing moment of confusion that we are the world’s heart beat, which is corrected. It however compels us to think that while the world will live on without us, these characters are the Roaring 20s.

A feeling of sadness grows as we hurtle towards the end of the film. The closure will sever the camaraderie of the group, but as much as they’ve given the bar an identity, it has reciprocated. It’s touching to see a place and people interact in a way that has vanquished a feeling of loneliness for some, especially Michael, affording them a place they feel they can call home.

At it’s heart, it’s a film about belonging and the bar is a setting to depict this fleeting feeling as the inevitable loneliness approaches. How often in our day-to-day lives are we actually alive, because while not all the characters, but it feels that some are only alive in the bar. As we watch some leave the Roaring 20s for the last time, they feel like ghosts disappearing in the light of day.

This is a simple and touching film that allows us to bond with its characters. A collage of people and lives, we watch as they come and go, and in a time of division it offers a welcome warmth of human connection.

A British indie about loneliness in the British capital acquires an extra dimension as we all isolate and shield ourselves against the virus inside our homes - watch it now [Read More...]

Sicilian docudrama about two young men on the margins of society encourages empathy over recrimination of immigrants - in cinemas and exclusively on Curzon Home Cinema on Friday, December 11th. [Read More...]

German drama captures the raw emotions and the ignorance of youth to their impending existential crisis - in cinemas and on VoD platforms on Friday, December 11th [Read More...]