Cat in the Wall

"Dirty gem"
Brexit-era dramedy showcases a South London council estate reconciling their truths amidst the backdrop of xenophobia and... erm... a very curious cat - watch it for free this December only with ArteKino

Documentarist duo Mina Mileva and Vesela Kazakova have switched from the confines of archival footage to a different style of storytelling. Bridging the gap between family comedy and drama, Mileva and Kazakova’s first fiction feature follows a Bulgarian single parent called Irina (Irina Atanasova). She is a mother eager to keep her son from the realities of a country that has voted to stop immigrants such as them. Surrounding her son with a select group of children, the diversity of race which educates her son feels at odds with the lifestyle their more affluent neighbours uphold. One family aches for universality, the other individuality, but both clash over the wonders a wandering cat brings to their homes.

Paired with nervy brother Vladimir (Angel Genov), Irina aches for a setting where neighbours and friends can discuss their problems with tactful aplomb. English falls out of her mouth with alien demeanour, and Irina – both the voice of reason and resource – finds herself as lost to the walls that hold her as the ubiquitous cat that centres the plot. The plot emerges at its own pace, capturing the frustrations of a life unsolved. Atanasova is outstanding, doubling as the mother and immigrant searching for soul in a hollowed out building that favours feline over female. 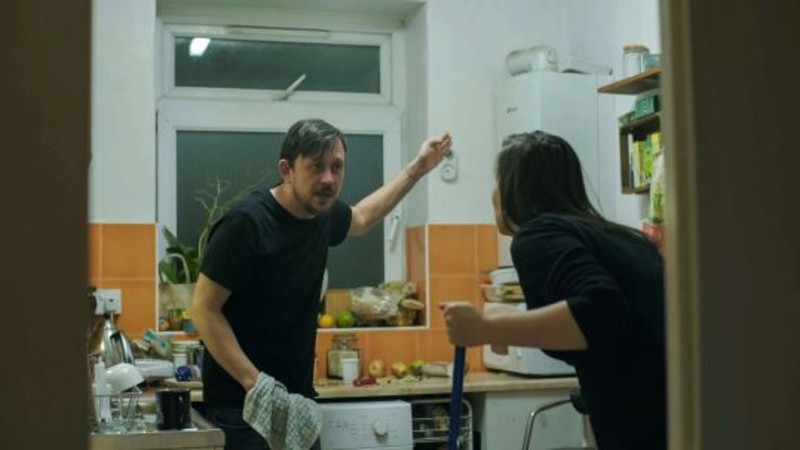 Shades of The Coen’s more cryptic approach to filmmaking seeps into the work, as tone, tempo and temperature dictates the ambience of the poetry in question. The film, by no means crowd-pleasing, shapes itself in the questions that happen between neighbours of a differing custom. David Cameron is hailed as a saviour by the people who traditionally vote for the more liberal parties, as a London comes together even more presciently than the furry character that leads the audience to its soulful, searching climax.

Clasping at the straws that holds her family together, Atanasova essays her finest, rawest work as she shadows a fireplace, eyeing the outline of a Bob Marley poster in all of its glory. In this London that burns even brighter than the soaring ballads Marley bellowed comes an immigrant lonelier than the poster that sits on the mantelpiece. But like the cat that walks her window, Atanasova purrs with an energy that channels an independence from the culture that captures her. The metaphor, however portentous at first glance, is beautiful: each of us walks a path directed by the tails that carry us, however flimsy the tail might be.

Cat in the Wall is showing in December for free along with another nine dirty gems of European cinema only with ArteKino – click here for more information.