The Baltic nations have struggled to reconcile integration with their Russian minorities and anti-Soviet sentiment, and Latvia is no exception. Director Ilze Burkovska Jacobsen grew up in the final decades of the USSR, a time still very oppressive despite the impending collapse of the the Union. She encountered few venting outlets for her journalistic and creative ambitions under a regime that nobody suspected was about to collapse. My Favourite War is a culmination of her resentment towards her occupiers.

This 85-minute animations combines handmade drawings, soviet propaganda art, footage of historical events and recent images of Ilze is her chosen home of Norway. The drawings are not plush and vibrant. Instead the colour palette is dark and sombre, somewhere between grey and blue, with dashes of communist vermilion. This is representative of the repressed dreams of a young girl. The eyes of characters are shiny black, a little bit like insects. Or tragic humanoids. They do not look like happy people enjoying a life of freedom.

Ilze grew in the cynically self-proclaimed “happiest country in the world”. This conceit happiness lay mostly in the fact that people could not make choices. They were taught to be content with what they had. Her mother was profoundly embarrassed of her husband’s early death and – perhaps more significantly – that she made her daughter claimed two packages of butter from the local store (when people were only allowed to purchase one item). A secret she had to conceal at all costs. Non-conformative acts were deemed profoundly subversive, and the punishments were very harsh.

Allegiance to the regime wasn’t an option, either. Ilze’s mother had to join the Communist Party otherwise she would lose her job. Ilke’s first job as a journalist at the age of 10 was for the equally indoctrinated Pioneers newspaper. Yet, this stint turned out to be a powerful weapon for a mind bursting with original ideas and dreams (one of such dreams was to make a movie, which materialised in the shape of this very feature). Journalism was a very competitive field in the Soviet Union, and Ilze had the opportunity to dabble with topics such as recycling paper and sports. 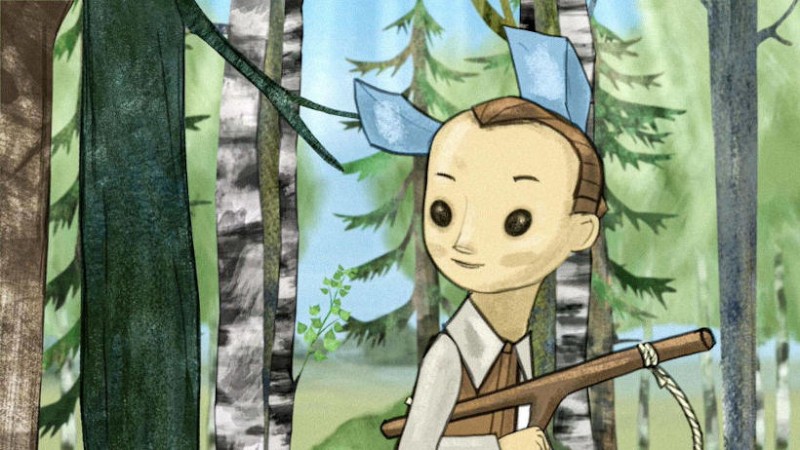 Surprisingly, the film title refers neither to Ilze’s quiet resistance nor to the Cold War, but instead to WW2, a conflict with which she was obsessed as grew up. There was abundant literature about the defeat of the Nazis available to Ilze and all Soviets, an achievement that the regime was keen to commemorate. At one point Ilza encounters human bones in her playground, and speculates that they must belong to a German soldier (as a Soviet soldier would be buried in a cemetery). The far more sinister and bizarre truth is revealed at the end of the film. It lends a whole new meaning to the expression “skeletons in the closet”.

The movie is dotted with Soviet iconography and songs, providing a peculiar snapshot of life under the USSR. At times, it feels a little nostalgic (despite the director’s rather unambiguous sentiments towards the Union). The story wraps up with real footage of the 770,000 signatures, the 600km human chain and two million people holding placards demanding the withdrawal of the three Baltic nations from the Soviet Union. This was the outcome of years of peaceful resistance, mostly through letters and songs. A watershed moment in the life of Ilze and all of her countrymen and women. The fact that Ilze opted to close the film real footage instead of animation conveys the message that the her country has finally come of age, beautifully bursting into an independent adulthood. Very moving indeed.

Strange, however, is the fact that the movie is almost entirely narrated in English. This prevents us from understanding Ilze in more detail. For example, I’m not entirely sure whether the director is an ethnic Latvian or Russian (all three Baltic nations have a sizeable Russian minority).

My Favourite War showed at the Tallinn Black Nights Film Festival as part of the Baltic Competition, when this piece was originally written. It took nearly six years to complete, and it was inspired by Marjane Satrapi’s Persepolis (2007) and Ari Folman’s Waltz with Bashir (2008).

It shows at the virtual edition of the Glasgow Film Festival, which takes place between February 25th and 28th.