A member of the Romanian Gendarmerie faces up to the secrets of his personal life in the LGBT drama Poppy Field, a gripping, minimalist tale from first-time feature director Eugen Jebeleanu. Essentially comprised of two elongated scenes, it subtly refracts upon itself to deliver a fascinating tale of being closeted in a hyper-masculine society.

Cristi (Conrad Mericoffer) is hosting his French Muslim boyfriend Hadi (Radouan Leflahi) at his flat. They cannot keep their hands off each other, almost instantly falling into bed. Life outside of the bedroom isn’t so simple. When Hadi broaches the idea of visiting the mountains for a night, Cristi waves it away with a variety of weak excuses. There is the sense that he is hiding something, boiling over into an awkward encounter when his seemingly well-meaning sister comes over to visit.

The second, longer act of the film puts Cristi’s tortured complexity into context. On the police beat, he is called to the scene of a queer cinema screening that is being blocked by ultra-nationalist protestors. Based on the true story of the 120 BPM being blocked by religious protestors in Romania, we are shown this scene in realistic detail, Jebeleanu creating a sense of chaos and spectacle through handheld framing and overlapping dialogue. When Cristi meets a former lover at that same screening, he quickly spirals out of control, potentially causing controversy when the encounter turns violent. 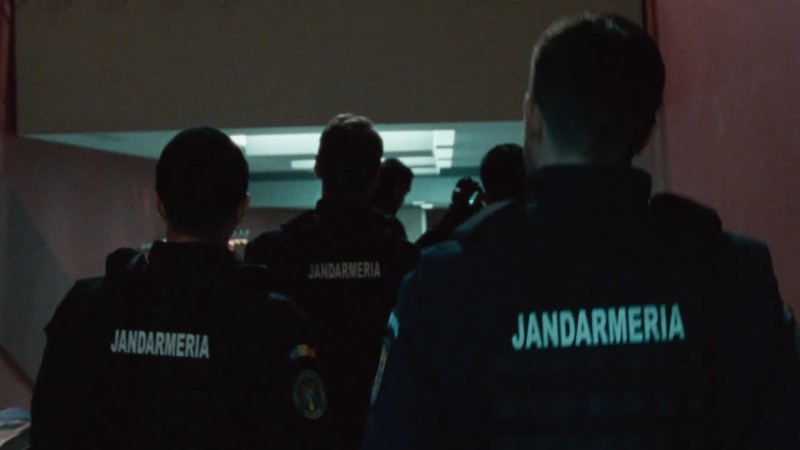 The film is shot in a classic Romanian New Wave style: stripped of artifice and filled with elliptical dialogue. Cinematographer Marius Panduru employs multiple long, intense takes that don’t call attention to themselves while maintaining a tense and claustrophobic environment. This simple and unadorned approach creates a true sense of authenticity and specificity, allowing us to reflect on the particular environment Cristi is trying, and mostly failing, to navigate, indicting wider Romanian society in the process.

Some viewers may be put off by the single-minded approach of the film, which only uses a couple of locations to convey the conflicted inner state of its main protagonist. I found it absolutely engrossing, especially the way the other cops — who occupy a strange middle-ground between the LGBT friendly theatre-goers and the religious zealots — try and calm Cristi down through the use of monologues that are alternately sad, funny and a little strange. Often shot in just one take, they betrays a great amount of confidence in the cast to carry scenes with words and subtle facial gestures alone. Mericoffer, in particular, is brilliant, able to convey the difficult inner life of his protagonist without relying on any unnecessary or overblown gestures.

Simply put, this is an exciting, morally grey film tackling a complex topic within a country that is still in the process of fully recognising LGBT rights. Stressing realism over didacticism while realising the full humanity of nearly all its players, it’s more proof of the rich and exciting potential of contemporary Romanian film to make fascinating art out of simple premises.

Poppy Field played as part of the First Feature competition at Tallinn Black Nights Film Festival, running from 13th to 29th November, when this piece was originally written. It premieres in the UK in March, as part of the BFI Flare London LGBT Film Festival.

Try walking in the shoes of this 17-year-old pregnant female from rural Pennsylvania who cannot rely on her family - Eliza Hittman's third feature film is on VoD on Wednesday, May 13th [Read More...]