The performance of the eponymous David Byrne stage show was filmed at New York City’s Hudson Theatre shortly before the pandemic hit. “Thank you for leaving your homes”, says the British-American singer during its intro – an especially poignant remark in hindsight.

The artist takes centre stage in a concert that features himself, a band of 11 musicians… and pretty much nothing else. As per his explanation, the goal was to create a musical experience that retained only the vital elements – which turned out to be only the players and their instruments. Apart from a curtain made of chains that conveniently hides the backstage while also providing access to it, the viewers have nothing to look at.

Byrne and co. stun and dazzle as a borderline-possessed chorus line, performing some of the most cherished tunes of the British-American indie rock songbook, while allowing space for cherished but lesser-known tracks and oddities. For example, watch out for the rendition of Lazy, the singer’s collaboration with Brit house duo X-Press 2, and witness the crowd go wild. While its origins and name suggest a focus on Byrne’s latest album – entitled American Utopia – the tracklist is heavy with songs of his former band, Talking Heads. This means the audience gets to see energetic renditions of all-time classics such as Born Under Punches (The Beat Goes On), Burning Down the House and the incredibly prescient Once in a Lifetime.

The decision to include these songs elevates the concert from a simple promotional tool for his latest work to a tribute to his extensive career. It also makes the production a spiritual sequel of sorts to Stop Making Sense (Jonathan Demme, 1984), often described as “the best concert film of all time”.

Byrne embraces the comparison wholeheartedly. Elements such as the suit attire and the band members entering the stage piecemeal are callbacks to the earlier film, but the perspective is completely different. In Stop Making Sense, Byrne was a young paranoid warning the audience of the perils of consumerism. In American Utopia, he is an old man looking at the man-made carnage of contemporary life and calmly saying there is room for change. 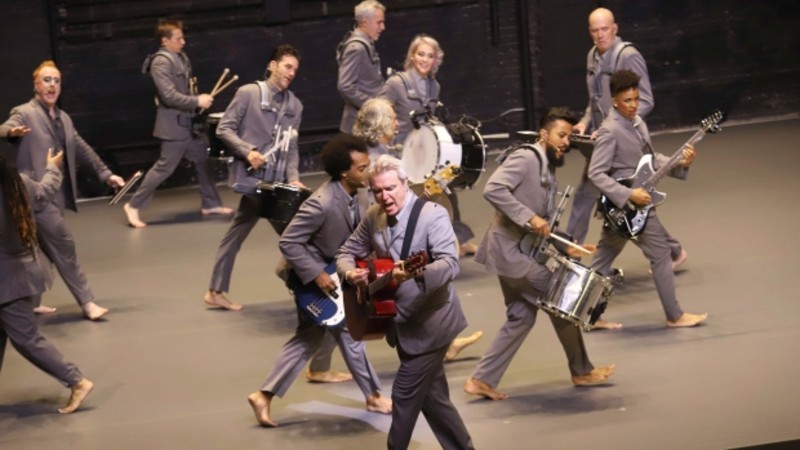 There is also a new political focus to this performance that prevents it from being a nostalgia fest. Deft recontextualisations turn the freakish dance tune I Zimbra into a communal anti-nationalistic cry, while the new song Everybody’s Coming to My House becomes a celebration of immigrants. “Most of us are immigrants”, Byrne says, as he introduces the song and points out his Scottish origins, “and we couldn’t do without them”.

Byrne is a white man who partly constructed career out of Black rhythms. He fittingly addresses the issue of institutionalised racism in the US. In one moment, football quarterback and political activist Colin Kaepernick gets a shout-out during the rendition of I Should Watch TV. Also, in an inflammatory cover of Janelle Monáe’s Hell You Talmbout, Byrne lists names of Black victims of state-sanctioned murders, including Brazilian politician Marielle Franco.

Lee’s treatment of this material is a show in itself. His insertion of footage of the victims’s mothers during the Janelle Monáe cover drives its point with force and precision. Elsewhere, he and director of photography Ellen Kuras have plenty of vantage points to watch the concert, filming from behind the curtain, from above the performers and even in their midst, running around with a handheld camera, blurring the line between audience and performance.

Relatability is at the heart of both the performance and the movie. Human connection is its main theme. Byrne is an empathetic, professor-like narrator with the brain to hand – literally. He dances with a brain model, a symbol of constant learning and endless possibilities. American Utopia should leave viewers with a sense of awe as well as very sweaty clothes.

American Utopia is on VoD and DVD on Monday, December 14th. Ir has enough groove to shake the pandemic blues off viewers. It also carries a powerful message reminding them that there’s a lot of work to do in this world.

Lucas Pistilli is a Brazilian-born journalist, currently based in Italy, with a passion ...

There will be bloods!

As Spike Lee releases his latest movie Da 5 Bloods, about four black veterans returning to Vietnam in search of the remains of a friend, David Stewart investigates the troublesome relation between African Americans and Hollywood [Read More...]